What Happened Before the Big Bang? Let's Talk About the Big Bounce. 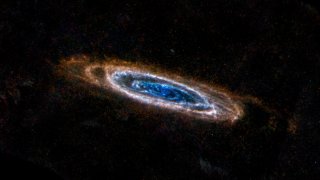 For the past several decades, the Big Bang theory has been the most widely accepted answer to how our universe came into being.

It goes something like this: There was an infinitely hot and dense tiny ball of matter. Then, there was a colossal explosion, creating and spreading out atoms, molecules, moons, planets, stars and galaxies we see today.

But what if the Big Bang wasn’t necessarily the beginning at all? Was there a different universe before this one? Is each black hole an entrance into another universe? Are there really an infinite number of universes?

Well, the questions can go on and on. But in trying to answer such profound questions, scientists usually hit a dead end, peering down from a cliff that is the limit of the known laws of physics.

In short, from our current understanding of the universe and the lack of technology needed to test the various hypotheses, such questions are unanswerable. That, however, doesn’t mean that we should throw in the towel and consume ourselves with more mundane tasks.

Existing theories do a wonderful job in explaining the evolution of the universe from the earliest moments after the Big Bang nearly 14 billion years ago. But the question of what came before has continued to puzzle even the brightest scientists today.

One theory that has caught on in some scientific circles is called the Big Bounce, in which there are a cyclical expansion and contraction. We understand that dark energy is continuing to expand our universe at a faster rate as time goes by, but at some point, according to this theory, the expansion will stop and the universe will start contracting.

Once the contraction reaches a certain level, there could be another so-called Big Bang. At this level, which could be akin to a singularity, all of the stars and galaxies are scrunched down into a size of a baseball and has a temperature of more than a quadrillion degrees.

As this theory suggests, we could be living at any point in an infinite sequence of universes, or this current universe could be the very first iteration.

Another prevailing theory, which was backed by famed theoretical physicist Stephen Hawking, is that before the Big Bang, space and time itself did not exist. Thus, in essence, this line of thought says there can’t be a “before” the Big Bang.

“Asking what came before the Big Bang is meaningless, according to the no-boundary proposal, because there is no notion of time available to refer to,” Hawking said during a lecture in 2016, a year and a half before his death. “It would be like asking what lies south of the South Pole.”