What Will Happen With NFL Sunday Ticket in 2022? 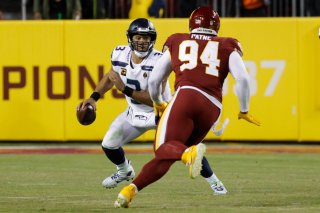 NFL commissioner Roger Goodell gave an interview this week in which he discussed the league’s plans to sell off parts of its TV properties, including NFL Network and the NFL RedZone channel. Also included in that discussion? The fate of NFL Sunday Ticket.

The out-of-market game package has been exclusive to DirecTV since it was established in 1994, but that contract reportedly expires after the 2022 season. Goodell has said that he would like a streaming partner to take over the package and make it available to more people.

“I think that it’s best for our fans to make it accessible on a digital platform,” the commissioner said earlier this year.

Goodell talked more about it in a recent interview with Sports Business Journal.

“We’ve had a tremendous amount of interest from some terrific media partners, technology partners that are interested in our content, interested in our platforms, interested in everything from Sunday Ticket to NFL Network to RedZone to a lot of media assets we still have available, and we’re looking to deploy in a way that looks to the future in the next generation of media,” the commissioner said.

Reports this year have also stated that once Sunday Ticket is available for streaming, fans will have the option of purchasing individual games or possibly subscribing to all the games of a particular team.

Back in September, The Athletic reported that the NFL preferred Apple as the next Sunday Ticket partner. Apple has never bid on professional sports rights before, but the NFL is said to have some interest in getting access to the iPhones of so many fans.

“Apple is different from Amazon in the sense that they are still a technological device company,”  Patrick Crakes, a TV consultant and formerly an executive with Fox Sports, told The Athletic in the September story. “So that diversifies the league—or the league’s always believed in an inclusive diversified kind of network mix.”

Another tech giant frequently mentioned as a potential Sunday Ticket partner is Amazon. Amazon is already in business with the NFL, having successfully bid on the rights to the Thursday Night Football package, to the tune of a reported $1 billion per year.

A different report from September, from CNBC, listed Amazon as the “likely frontrunner” for a multi-year Sunday Ticket deal. The report added that Amazon had a “serious interest” in the package and was in talks with the NFL.

In November, there was another report, from Front Office Sports, that Amazon was the favorite to get both the Sunday Ticket rights and the NFL Media stake.

Disney is a longtime broadcast partner of the NFL, with ESPN broadcasting Monday Night Football for many years, and ESPN-owned ABC before that. And Front Office Sports reported in November that Disney is interested in adding Sunday Ticket to ESPN+, citing no less of a source than Disney's CEO, Bob Chapek.

The package, Chapek said, “would make a particularly good addendum to our ESPN+ service.”

However, Puck reported this fall that Disney could ultimately spin off ESPN, although the company has denied that it plans to do so.

Comcast has certainly been mentioned much less often in the media when it comes to Sunday Ticket partners. But NBC has been in business with the NFL for many years and is known for frequent big bids on sports packages, most recently re-upping its deal with the English Premier League.

But in his own interview with Sports Business Journal this fall, NBC Chairman Pete Bevacqua did not rule out such a bid.

“It would be negligent on us not to take a deep dive into any one of these key elements of the NFL…Obviously we’re interested in any kind of conversation with the NFL where we could deepen our partnership with them.”

HBO Max, which is owned by AT&T but in the midst of a deal to be spun off into a new entity with Discovery, has also been mentioned less often than other competitors.

But the New York Post reported in November that HBO Max could be a “dark horse” candidate for the package.

And then there’s the incumbent, DirecTV. It is unlikely that it will remain the main partner, but some reports, including one by Pro Football Talk in October, that DirecTV could keep the satellite portion of the package, with another company taking the digital side. That way, those in rural areas who depend on satellite would still have that option.