Why the New iPhone SE Keeps Getting Rave Great Reviews 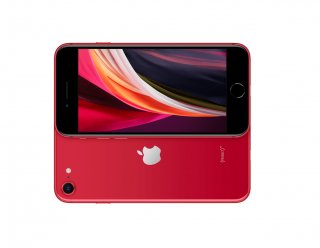 Apple's new iPhone SE, the revival of the company's less expensive iPhone that was first released in 2016 and discontinued two years later, becomes available this Friday, after preorders opened last week. The SE, which brings back the home button while running on Apple's newer chip technology, starts at $399, considerably less than its higher-end iPhones. Now, the first reviews of the new phone have arrived, and they're uniformly positive in praising the amount of value Apple packed into its latest release.

While she calls the new iPhone SE "an iPhone for people who hate new iPhones," the Wall Street Journal's Joanna Stern calls the 2020 iPhone SE "a great phone," although she is critical of the new phone's battery life.

Reviewing the new device for The Verge, Dieter Bohn says the SE makes "a strong case against $1,000 iPhones." Bohn gives it an 8.5 out of 10, praising the battery life, the camera (in light), and "software updates for years," although he denounced its "tired design with big bezels," the smaller screen and "noisy low-light photos"

"For people who want an iPhone, it makes buying a brand-new phone for less than $700 a whole lot easier," Bohn writes. "Before this week, you’d be choosing between refurbs or switching over to Android."

Reviewing the iPhone SE for Wired, Lauren Goode rates the new phone an 8 out of 10, also praising the value of getting an iPhone for that low price. She calls it "a tiny slab of good news" for those who'd rather spend $400 than $1,000 on a new iPhone.

Goode calls the camera "extremely capable," despite not being at the level of higher-end iPhones, while also praising the home button and ability to wirelessly charge. On the negative side, Goode noted the "relatively short battery life," lackluster speakers, its lack of 5G-ready capability, and the smaller display.

"The display isn’t as brilliant, its camera isn’t as remarkable, the phone’s battery sputters by the end of the day," Goode writes. "But it’s still a good iPhone, and for a lot of people that means it’s good enough."

Reviewing the iPhone SE for Engadget, Chris Velazco gives it a 90 (out of 100) and praises the value as well, while noting that it "might be the most important phone Apple releases this year." He states that customers still using older phones, who have been resisting upgrading, might see this as an opportunity to get a good iPhone for less than usual.

Velazco praises the iPhone SE's "incredible value," high performance, "surprisingly good camera" and its up-to-date chipset, while criticizing its "dated design," lack of night mode, and battery life, which is "only ok."

The iPhone is not available at Apple Stores, which are closed until at least May 11. Instead, they can be ordered online.