You Just Bought an OLED TV, Do You Have to Worry About Burn-in? 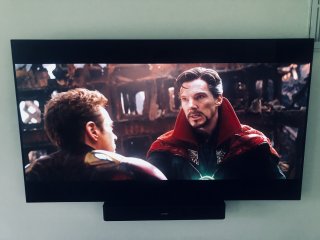 It was definitely pricier than the competition, but you went for it anyway. Now, you’re the proud owner of an OLED TV. Every time you turn this beast on, you get to enjoy inimitable image quality, nearly perfect black levels, precise colors, wide viewing angles and outstanding uniformity.

You may, however, have heard that your ridiculously awesome-looking OLED screen is susceptible to permanent damage – often known as burn-in – that can ruin your TV-viewing experience. Should you really worry?

Despite all of the goodness that OLED screens offer, that is the technology’s Achilles’ heel. Burn-in can happen to any type of device that uses OLED screens – TVs or smartphones – and to any brand – from Google and Samsung to Apple.

Burn-in occurs whenever a persistent part of the image of a screen, such as a channel logo or a scoreboard, remains as a ghostly background no matter what else is being shown on the screen. LCD TVs are less likely to have such problems, but then again, you’ll be sacrificing OLED’s amazing image quality.

Yet, as annoying as this can indeed be, OLED burn-in will likely not happen with normal use. In fact, most burn-in is actually image retention, which often disappears after a few minutes. In most cases, you’ll witness image retention long before it becomes permanent burn-in.

It’s also a good idea to take proper precautions to avoid the hassle of dealing with burn-in. Although it could be difficult with one’s TV-viewing habits, try not to leave a single, static image element like a channel logo on-screen for long periods of time. Change the channel once in a while, and if you’re an avid gamer, don’t have the game on pause for hours on end.

OLED TV manufacturers have also jumped in to minimize the chance of burn-in. User settings like “Screen Shift” on LGs and “Pixel Shift” on Sonys move the image slightly around the screen. There are also built-in screen savers that automatically pop up after extended periods of inactivity.

OLED TVs can also perform “refreshers” on a certain timed basis to remove image retention. On Sony TVs, this particular feature is called “Panel Refresh,” and on LGs, it is known as “Pixel Refresher.” If you ever notice image retention, this function can be run manually as well. For LG TVs, you can receive a notification to run this feature after 2,000 hours of viewing time.

Starting with the 2018 TV offerings from LG, there is a burn-in preventive feature called “Logo Luminance Adjustment,” which has been designed to automatically identify static on-screen logos. If detected, the TV will decrease the logo’s brightness by 20 percent after two minutes.