‘Accepting Risk’ In U.S. National Defense Is No Longer Acceptable 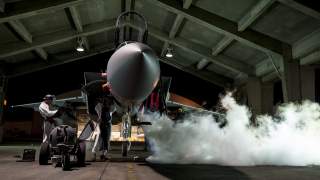 Washington is a city that loves euphemisms. All difficult issues and troublesome subjects are couched in simple, banal terms that decision makers hope the American people will think they understand but that actually mean something different. So “revenue enhancement” is what one says when they really mean increased taxes and fees. “Undocumented immigrants,” a term which sounds as if someone just left their wallet in another pair of pants, is employed to avoid using the word illegal.  How about “violent extremists” to refer to ideologically-driven, organized and armed terrorists?  Then there is the term “misspeaking,” popular among politicians of all stripes wishing to avoid having to admit they out-and-out lied.

The Department of Defense is the master of speaking in code words. In about a minute I came up with the following examples: kinetic operations, collateral damage, enhanced interrogation techniques, overseas contingency operations, effects based operations and green on blue incidents. The worst of the lot is the term “accepting risk.” Accepting risk is a legitimate term taken from the field of risk management to describe a strategy of not spending money to mitigate the effects of low probability events. Since there is always an element of uncertainty with respect to the identity of future adversaries or their propensity to initiate hostilities against the United States, some degree of risk is inevitable in defense planning.

However, the phrase accepting risk has been utilized in recent years to mean something far different. It is increasingly employed by civilian defense officials and uniformed military leaders to characterize their response to the widening gap between what the U.S. military is being asked to do and the capabilities and forces that can be sustained given current defense budgets. Decisions to cut force structure, reduce training activities, defer maintenance on aging platforms and systems, delay or stretch out acquisition programs and shrink R&D activities have real consequences. Logically, it is not possible to do more with less, as the current Defense Secretary once asked of his department. One can really only do less with less. But this is justified by employing that decidedly neutral phrase that we are accepting risk.

With each round of reductions in uniformed personnel, program cancellations or delays and reduced budgets for operations and sustainment, the U.S. military has accepted more risk with respect both to meeting the array of current missions as well as being able to prevail in future war scenarios.  The impact of declining defense budgets, driven since 2013 by the Budget Control Act and the threat of sequestration, is to create a cascading series of negative effects on the military. For example, according to testimony to Congress by the Secretary of the Air Force, less than half of all Air Force squadrons are combat ready. In addition, the Air Force faces serious shortages of both pilots and mechanics. At the same time, pilot flying hours have fallen dramatically. Finally, the age of the Air Force’s fleets of fighters, bombers and aerial refueling tankers has increased dramatically which results in increased maintenance costs and declining capability overall. Each of the other services can tell similar horror stories.

But the current situation did not come about all at once, as the result of a single decision. Rather, it is the product of a series of relatively small actions taken by the services and the Department of Defense (DoD), designed to address the inadequacy of defense budgets by cutting capabilities and capacity while simultaneously accepting small increases in risk.  Cumulatively, years of accepting risk has resulted in a Joint Force that cannot execute the national military strategy. This is a big risk. Accepting risk became the “death of a thousand cuts” for DoD.

Even when they try to explain what they mean by accepting risk, Pentagon officials and military leaders tend to use language that does not plainly and fully explain the kind of risk. They like to talk about conflicts taking longer to win and costing more.  One military leader who has decided to avoid euphemisms and tell truth to power is Army Chief of Staff, General Mark Milley. In testimony before the Senate Armed Services Committee (SASC) in September he explained what was truly meant by accepting the risk of asking an Army burdened by aging equipment, inadequate force structure, inferior technology and limited training to fight a war against a peer competitor: “The butcher’s bill is paid in blood, of American soldiers, for unready forces and we have a long history of that.”

Accepting risk allows the White House and DoD to avoid having to make truly painful choices, such as giving up our military presence in a major region of the world and abandoning long standing allies, and the Congress to pretend that we do not have to spend more to maintain an adequate military. In the same hearing at which General Milley and the other service chiefs testified, the SASC chairman, Senator John McCain, observed that “We are lying to ourselves and the American people about the true cost of defending the nation.”

Ironically, the most serious risk the Pentagon has to accept is Congress’s inability to provide normal, stable and adequate funding. The impact of Congressional budget shenanigans, from continuing resolutions to sequestration, is in many ways more dangerous to the well-being of our military than what our foreign adversaries are doing.

The decision to no longer blindly accept risk means, among other things, the reversal of the force structure cuts of the past several years, increased funding for modernization, particularly in the Army and more resources for maintenance, repair and overhaul. It also requires not just the repeal of the Budget Control Act, but a forthright decision by the next Congress and President to spend what is necessary to adequately defend the nation and its global interests. When it comes to accepting risk, it is time for everyone to just say no.