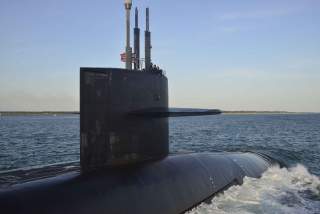 On March 1, 2017, the Bulletin of the Atomic Scientists released a major scoop that has extremely worrisome implications for U.S.-Russian relations and the risk of nuclear war. The story, by Hans Kristensen, Matthew McKinzie and Theodore Postol, concerns a new technical capability called “super-fuzing” that dramatically increases the lethality of the United States’ submarine-launched nuclear weapons.

Much of the report is given over to technical descriptions, but the gist of the story is this — the W76–1 naval warhead is now three times as lethal as before, and this massive expansion of kill capability makes it look like the United States is preparing for a decapitating nuclear attack.

Now obviously the United States is not actually planning to do this, nor can it be confident an all-out assault would “succeed.” But technologically, a preemptive strike on Russia now appears feasible — and that’s what matters.

In the world of deterrence, perception is everything — and if the Russians come to question our intentions, especially in a moment of crisis, the results could be catastrophic. Super-fuzing, far from keeping the United States safe, threatens to undermine the strategic stability that keeps nuclear war at bay.

The basic concept behind super-fuzing is simple. Whereas previous warheads on submarine-launched ballistic missiles had a fixed-height fuze, the “super-fuze” is variable and self-measuring. This vastly improves the warhead’s chances of detonating inside an optimal above-target zone called the “lethal volume” and obliterating the target beneath.

Warheads with fixed-height fuzes couldn’t be relied upon to detonate with surgical precision, so several had to be lobbed at a single target to ensure its destruction. The super-fuze, in contrast, makes warheads so precise and lethal that fewer are needed to destroy hardened targets — such as Russian ICBM silos.

This new kill capability frees up hundreds of warheads for alternative targets and completely reshuffles the calculations involved in a full-scale attack.

As the authors of the Bulletin report describe, the upshot of this recalculation is that the United States appears to be striking a nuclear warfighting pose. Disturbingly, the U.S. military also plans to outfit its land-based ICBMs with super-fuzes over the next two decades, a choice which is sure to exacerbate the strategic environment even further.

Right now, U.S. and Russian nuclear missiles, on land and at sea, are needlessly kept on high alert. This means that when a nuclear launch is reported — accurately or not — the window of decision-making about whether or not to retaliate is extraordinarily short. This window is especially condensed in Russia, which relies on ground-based radar rather than satellites for its early warning systems.

Russia has a mere 15 minutes at most between the earliest possible warning of nuclear attack and the moment of likely impact. You can probably imagine how this situation breeds the risk of an accidental launch. Let’s say the Russian radar systems mistakenly report a U.S. nuclear launch — which, by the way, has happened in recent history.

Since a U.S. attack would seek to destroy their ability to retaliate, the Russians have only a few minutes to decide whether or not to launch a response. If they’re going to strike back, they have to “preemptively retaliate” by launching their nukes before the U.S. missiles arrive.

Until recently, it was safe to assume that such a warning would be met with extreme skepticism by the Russian government. In the 1990s and 2000s, a U.S. nuclear “bolt from the blue” seemed highly unlikely — a situation that no doubt allowed cooler heads to prevail during the infamous Norwegian rocket incident of 1995.

However, when you add super-fuzed, hyper-lethal naval warheads to the equation, Russian officials now have reason to second-guess their skepticism.

After all, didn’t the Americans quietly outfit their submarine-based nukes with this technology? Doesn’t the United States possess the capability to launch a massive preemptive attack? You can see how their thought process might spiral downwards, as the seconds tick by, toward a decision to launch. And to some degree, who could blame them?

The heightened U.S. kill capability is, after all, very real.

Again, perception is what matters in deterrence theory — and as Kristensen, McKinzie and Postol point out, super-fuzing “creates exactly what one would expect to see, if a nuclear-armed state were planning to have the capacity to fight and win a nuclear war by disarming enemies with a surprise first strike.”

If Vladimir Putin knows the United States possesses this capability, and ground radar reports a nuclear launch during a moment of geopolitical crisis, he may not err on the side of caution. The risk of miscalculation is immense.

Despite the alleged coziness between the Trump and Putin camps, U.S.-Russian relations are currently at their lowest point in decades — and now super-fuzing threatens to destabilize the nuclear matrimony that binds the two countries together.

Improving diplomatic relations is obviously a long-term project, but fortunately there is still one weird trick to substantially lower the risk of nuclear war. Trump could take nuclear weapons — including submarine-launched missiles — off hair-trigger alert tomorrow, instantly widening the nuclear response window and conclusively demonstrating to the Russians that they have no reason to fear a preemptive attack.

Skeptics of de-alerting will no doubt point toward the thorny issue of Russian verification as a major wrinkle in this plan. The Russians do need to have confidence in the legitimacy of U.S. actions and SLBM verification requires some fairly intrusive measures.

But this challenge is really an opportunity. A bold move such as de-alerting would hark back to an earlier era of joint nuclear reductions and reestablish a modicum of trust between the two countries.

The United States and Russia could then tackle the verification problem cooperatively, in much the same spirit as past bilateral endeavors on nonproliferation and nuclear security. Not only would this project help rebuild diplomatic relations, it would counter the aggressive U.S. posture implied by super-fuzed warheads.

The technical challenges of verification are real, but de-alerting nuclear weapons is just common sense — and now with the strategic risks posed by super fuzing, it seems more important than ever.

John Baker is the Mellon-ACLS Public Fellow at the Ploughshares Fund.