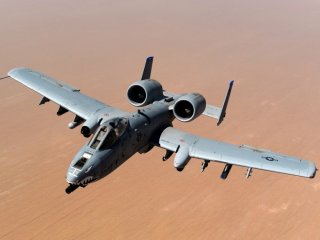 Supporters of the U.S. Air Force’s A-10 Warthog attack jet celebrated in February when the Pentagon announced that the flying branch would delay retiring the heavily-armored, gun-armed planes until 2022, eventually replacing the A-10 squadrons one at a time with units flying the new F-35 stealth fighter.

Previously, the Air Force planned to fully retire all 300 A-10s by 2018. Congressional and public opposition—and the fact that the Pentagon has recently deployed A-10s to battle Islamic State and to deter Russia—compelled the Air Force to bump back the twin-engine jet’s final flight. “The budget defers the A-10’s final retirement until 2022, replacing it with F-35 Joint Strike Fighters on a squadron-by-squadron basis, so we’ll always have enough aircraft for today’s conflicts,” Defense Secretary Ashton Carter said.

But a planning document the Air Force published in mid-February reveals that 2022 is the flying branch’s deadline for the last A-10 retirement, not the first. In fact, according to the document, the first A-10s—those currently with the Air National Guard in Indiana and the Air Force Reserve in Kansas—will bow out as early as 2017. Active-duty Warthogs in South Korea and Arizona would cease flying as early as 2018, followed by their Guard counterparts in Maryland in 2019. The last A-10s—in Idaho, Michigan, Arizona and Georgia—would retire in 2020 and 2021.

To be clear, for Warthog-advocates the Air Force’s retirement plan is an improvement over the 2013 plan, which had the A-10 ceasing operation in 2018. But having received new avionics, weapons and wings, the A-10s in theory are capable of serving into the 2030s. And in any event, the F-35 is too fast, flimsy and lightly-armed to fully replace the rugged Warthog on any schedule.

It’s possible—even likely—that Congress will alter the Air Force’s plan when it considers the 2017 budget later in 2016.