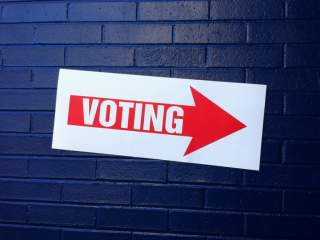 Millions of people around the world went to the polls this year. Nigerians voted out their incumbent president and elected a former military dictator in his place. British voters surprised the experts predicting another hung parliament by giving the Conservative Party a majority in the House of Commons. Turks got to vote twice, denying the Justice and Development Party a parliamentary majority in June elections but giving it one in November elections. These are just a few of the elections that made news in 2015. The world will have plenty of important elections in 2016. Here are ten to watch.

Taiwan’s Presidential Election, January 16. Things don’t look good for Taiwan’s ruling Kuomintang Party (KMT). The KMT initially selected Hung Hsiu-chu, known as “little hot pepper” for her fiery style, as its presidential standard-bearer. But she was trailing so badly in the polls that she was dumped from the ticket in late October in favor of Eric Chiu, the KMT’s party chair. Despite the switch, Tsai Ing-wen, chair of the Democratic Progressive Party (DPP), remains favored to win. She will make history if she does; Taiwan has never had a woman president. Beijing will be following the election closely. The DPP has long championed the idea of a distinct Taiwanese identity and called for Taiwan’s independence. Tsai says she will maintain the status quo in cross-strait relations, but some of her critics say she won’t.

Uganda’s Presidential Election, February 18. Yoweri Museveni must like being president of Uganda. He has held the job since 1986 and is seeking another five-year term. Uganda’s main opposition parties have formed a coalition to oppose his reelection. His main competition will likely come from two men who were once close to him. Kizze Besigyewas Museveni’s personal doctor before they had a falling out. Besigye has tried and failedthree times to defeat Museveni at the ballot box. Meanwhile, former Prime Minister Amama Mbabazi declared in June that he would seek the presidency as an independent candidate. Museveni has used both carrots and sticks to divide and intimidate his opponents—Besigye was arrested for endangering the public order. As a result, many Ugandans doubt that the election will be free and fair, or that it can lead to power changing hands.

Bolivia’s Constitutional Referendum, February 21. Bolivian presidents can serve only two terms. However, incumbent President Evo Morales, who has been in office since 2005, is now in his third. Bolivian courts ruled that his first term didn’t count against the limit because it was under an old constitution. But now that Morales is in his second term under the new constitution, his supporters have arranged for a national referendumthat would allow him to serve one more term, meaning he could stay in office until 2025. Morales pledged not to seek another term during his reelection campaign last year, but he isn’t calling for a “no” vote. Bolivians might, however. Despite Morales’s immense personal popularity, many Bolivians are skeptical about scrapping term limits.

Iran’s Parliamentary Election, February 26. Iranians go to the polls in February to choose who will sit in two different bodies: the Islamic Consultative Assembly and theAssembly of Experts. The first is the official name of Iran’s Parliament. The second is the body in charge of electing Iran’s Supreme leader. The parliamentary elections will shape whether Iranian President Hassan Rouhani can move ahead with his reform agenda. Conservatives have succeeded in blunting Rouhani’s efforts so far. The elections for the Assembly of Experts matter because Iran’s Supreme Leader, Ali Khamenei, is seventy-six-years-old and rumored to be in ill-health. Of course, how much elections can change Iranian policy is questionable; Iran’s Guardian Council, the country’s most powerful body, decides who gets to run in Iran’s elections.

Peru’s Presidential Election, April 10. Keiko Fujimori is the favorite to be elected Peru’s next president. If her last name sounds familiar, it’s because her father, Alberto Fujimori, was Peru’s president from 1990 to 2000. He’s now in prison, having been convicted of a range of crimes. If the younger Fujimori wins, she will accomplish a rare political feat: becoming president after being first lady. Her father divorced her mother during his first presidential term and made Keiko first lady. Fujimori’s presidential bid has been helped by fact that Peru’s incumbent president, Ollanta Humala, whom she lost to back in 2011, is sticking to his long-standing pledge not to run for reelection. Fujimori’s main rival is former Prime Minister and Finance Minister Pedro Pablo Kuczynski. If no candidate receives a majority of the vote, the two highest vote getters will square off in a run-off election.

Philippines’s Presidential Election, May 9. Beijing and Washington will be watching the Philippines’s presidential election closely. Under the leadership of President Benigno Aquino III, the Philippines has forged closer ties to the United States and vigorously disputed China’s territorial claims in the South China Sea. But Aquino is term-limited. He has endorsed his former interior minister, Manuel “Mar” Roxas II as his successor. The endorsement hasn’t done much for Roxas, who trails in the polls. Aquino’s vice president, Jejomar “Jojo” Binay, who hails from an opposition party, is faring better, though he is dogged by corruption allegations. Binay is seen as likely to reverse Aquino’s hardline position on China. Another prominent candidate is Mary “Grace Poe” Llamanzares, the adopted daughter of one of the Philippines’s most popular movie couples. She once took U.S. citizenship, raising questions over whether she is a qualified candidate.

Russia’s Parliamentary Election, September 18. Elections to the Russian Duma will be held in September. That’s three months earlier than usual. Why the change? Supporters say it is to hold Russia’s parliamentary, regional, and local elections all on the same day and to ensure that a new Duma is chosen before the fall budget process begins. Critics say it is intended to stifle opposition parties by forcing them to campaign in August, when voters are thinking about vacations and are hardest to reach. The Duma election will feature another change. Previously, all seats in the lower house were decided based on how well each party did. Now, half the members will be chosen by direct election. Whatever the impact of these changes, analysts will be watching the election closely to see whether voters turn out to back Vladimir Putin’s United Russia Party, thereby endorsing the Russian leader’s turn toward a more belligerent foreign policy even in the face of a deteriorating economy.

Nicaragua’s Presidential Election, November. Nicaragua’s constitution used to restrict its presidents to two five-year terms.  But no longer. Last year, the Nicaraguan Congress voted to do away with term limits. It also did away with the rule requiring the winning presidential candidate to get at least 35 percent of the vote. The beneficiary of the new rules is incumbent President Daniel Ortega, the leader of the Sandinista Party, who is finishing up his second consecutive term. (He was also president from 1985 to 1990; the Nicaraguan Supreme Court ruled that that term did not count toward his term limit.) Ortega won a landslide victory back in 2011 on an anti-poverty platform. Five years later, Nicaragua remains the poorest country in Central America and the second poorest in Latin America. A big question is how free and fair the November election will be. Freedom House rates Nicaragua as “partly free,” and this summer, riot police beat protesters demonstrating against the changes in electoral rules.

U.S. General Election, November 8. Nearly six hundred days after the first major party candidate declared for the American presidency we will find out whether Democrats have a “Blue Wall” in the Electoral College. Eighteen states plus the District of Columbia have voted Democratic in each of the last six elections. They account for 242 of the 270 Electoral College votes to needed to win. Throw in the fact that 50,000 Latinos (who lean Democratic) turn eighteen every month and that the percentage of white voters(who lean Republican) in the electorate continues to shrink, and you can see why Democrats like their chances. But walls can come tumbling down and favorites can lose. Just ask Hillary Clinton, who hopes to become the first woman president in U.S. history. Besides trying to keep the White House, Democrats hope to take back the Senate. (Republicans have close to a lock on the House of Representatives.) Here again Democrats are optimistic. The GOP has to defend twenty-four Senate seats; the Democrats just ten. Democrats need just four more seats to regain control of the Senate if they win the White House, and five if they don’t.

Democratic Republic of the Congo (DRC), Presidential Election, November 27.The DRC may soon experience its first peaceful transition of power—or it may not. Joseph Kabila has been president since 2001. He inherited the position after his father’s assassination in 2001, and he won disputed elections in 2006 and 2011. The DRC’s constitution bars him from running again.  But many Congolese doubt he will relinquish power. Kabila hasn’t said he will step down, and his move to revive a long dormant plan to reorganize the DRC’s provinces helped prompt the country’s highest court back in September to direct that the election timetable be reevaluated. Shortly after the court’s decision, the DRC’s main opposition party ended talks intended to smooth the path to elections, and Kabila expelled seven senior government officials for signing a letter asking him not to run.