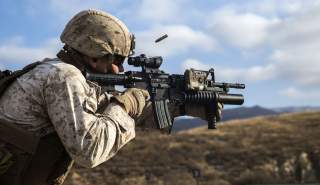 On June 1, the Monocacy, the Palos and three small cutters set sail down the Han River on a river charting expedition heading towards Seoul. As they made their way, the American boats approached a bend in the river overlooked by three forts. They could see troops lining the ramparts. As the U.S. ships made their way around the bend, a shot cracked through the air, signaling the commencement of an ambush. The Korean soldiers rained heavy fire on the American ships with antiquated cannons and enormous tripod-mounted jingal matchlock muskets. However, even as hot metal sprayed the water around the American ships, it inflicted little damage—the old weapons were inaccurate and could not easily adjust their aim.

The American gunboats returned fire, their modern twelve-pound guns driving the Korean troops from the walls and gun positions into the shelter of concealing ravines. The U.S. force’s commander, Lieutenant Commander Blake, wheeled his ships around and blasted all three forts until they ceased firing. Then he sailed back to the sea. Only one sailor had been wounded by enemy fire, and another had lost a few fingers to the recoil of his own howitzer.

The American ambassador could see the Koreans were uninterested in a treaty, but was unwilling to back down. “If the squadron retires now, the effect upon the minds of the Coreans, and, I fear, upon the Chinese also, will be injurious, if not disastrous to our future prospects in both countries.” He decided that American troops would attack the forts unless the Koreans formally apologized for the riverside ambush.

Koreans officials were soon back in touch, with additional letters holding the Americans responsible for intruding into their territorial waters, and finally recounting the inglorious fate of the General Sherman in terms that were not suitably apologetic, as far as the ambassador was concerned. The governor of Ganghwa sent what he described as a “few worthless articles”—three cows, fifty chickens and a thousand eggs—in an effort to smooth things over. The Americans refused the offer.

As Low did not receive the formal apology he wanted, he prepared a punitive expedition for June 10, by which time dangerous spring tides would have abated. The squadron’s marine contingent busily trained a battalion of five hundred U.S. Navy sailors in infantry skills. The force embarked on June 10, heading for the same forts they had engaged in battle nine days earlier.

Disregarding another Korean negotiating ship lacking the sought-after apology, the U.S. vessels approached the Choji fort at noon and silenced its gun after a short exchange of fire. Disembarked Marines quickly seized the hastily abandoned fort without resistance, while Navy sailors labored all day to wheel ashore twelve-pound howitzers through thick mud. The cannons were finally in position by the evening, and fired their first few salvoes late at night to chase away “ghostly” white-robed Korean soldiers who were howling at the American troops late at night to unnerve them.

The American sailors completed their destruction of Choji the following morning, and proceeded to capture Deokjin fort, which also had been abandoned. Pausing to toss sixty abandoned guns into the river, the American troops finally advanced toward the intimidating citadel of Gwangseong.

Korean general Eo Jae-yeon commanded the citadel’s garrison, and had no intention of retreating, having destroyed the bridge which would have permitted his force to retreat. Twice his troops pounced on the advancing Americans. First they attempted to snipe at the American troops from across a nearby ridge. Then hundreds of Korean warriors attempted to overrun the contingent in wild charge. However, though the Korean soldiers’ flintlocks and jingals kicked up a storm of fire, they simply could not match the Americans’ fast-firing Remington rolling-block rifles and accurate long-range artillery.

Finally the nearly six hundred marines and sailors advanced into cover in a ravine within 120 yards of the walls of Gwangseong fortress, exchanging furious fire with the defenders. The landed artillery and the Monocacy blasted the citadel’s walls, and then the sailors led a ragged charge up the sloped ramparts. The Korean defenders, beginning to run out of ammunition, began throwing large rocks and hacking with swords. Lieutenant McKee, the first man over the top, was mortally injured by a shot to the groin and then stabbed by a spear.

As more sailors and marines poured over the top to engage in furious close quarter combat, Marine sharpshooter James Dougherty spied General Eo and shot him, an action that won him one of the fifteen Medals of Honor awarded that day. The remaining Korean defenders began to flee for the river, suffering their worst losses as they were raked by rifle fire and canister shot. Gwangseong was in American hands by 12:45. Two more abandoned forts nearby were also captured and destroyed.

Ambassador Low was apparently mystified that the carnage at the Ganghwa forts had not convinced the Joseon dynasty of the American’s peaceful intent, and continued to send messages to the Korean officials inviting them to negotiate. Badly misjudging the national mood, he attempted to use the return of Korean prisoners as bargaining chip, to which the Korean officials replied that he was welcome to keep them, and that any returned would be “punished accordingly.” Nine days after the seizure of Gwangseong, the governor of Ganghwa sent a letter to Low promising there would be no treaty and no further meetings with Korean diplomats.

“Recent demonstrations produced no effect upon negotiations,” he concluded in one of his last reports. “Nothing can be effected short of [attacking] the capital. Force insufficient to go there without great risk. If peaceful means fail, shall withdraw and wait instructions.” The American fleet sailed back for Japan on July 1 without having achieved its political objectives. The Korean troops at Ganghwa suffered a devastating defeat, but their nation had won the battle of wills.

Korea would finally establish a treaty with the United States in 1882. That treaty was negotiated by Commodore Shufeldt, who came in on a lone ship rather than a naval squadron bristling with firepower.