In 1942, U.S. Marines Launched a Raid from Submarines Straight out of an 80s Action Movie 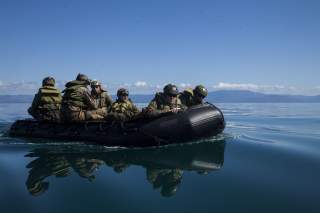 On a stormy night, U.S. Marines set off secretly from submarines to assault a remote island base. They are led by a controversial commander with radical new ideas. And the son of the sitting U.S. president is one of his officers.

The Makin raid in 1942 might seem to have the implausible plot of an action movie—and in fact, one year later it would become one! But it was a deadly real for both the American and Japanese troops involved. What was arguably the first combat operation ever undertaken by a U.S. military special forces unit nearly ended in complete disaster.

At the outbreak of World War II, President Franklin D. Roosevelt requested that the marines form an “unconventional warfare” unit to conduct raids behind enemy lines modeled after British commandos. U.S. Marine Corps brass disliked the idea, but reluctantly formed two battalions of “Raiders”—and appointed a black sheep of the USMC to lead one of them.

Lt. Col. Evans Carlson had been wounded in action as an army captain in World War I, decorated with the Navy Cross for defeating bandits in Nicaragua as a marine lieutenant, befriended FDR while commanding his guard detachment in Georgia, and then accompanied and observed Communist insurgents fighting the Japanese in China. There, Carlson met key leaders such as Mao Zedong and Deng Xiaoping and developed an appreciation for the tactics, team spirit and zeal of the Communist guerilla units. Upon returning to the United States, Carlson resigned his commission to advocate against Japanese expansionism, before reenlisting shortly before the U.S. entry into World War II.

Carlson sought to instill in his Raiders the team spirit that he had observed in China, a quality he called gung ho, based on the Mandarin Chinese words gōng (work) and hé (and/together). Ironically, gung ho was not an actual Chinese idiom, but would soon become a term in English. The marine leader believed in giving more initiative to subordinates and breaking down the barriers between officers and enlisted men, which did little to endear him to his superiors.

The Pacific War began with six months of defeats for U.S. forces until the decisive turning point in the naval battle of Midway. In August 1942, the U.S. Navy and Marines were ready to go on the offensive with an amphibious landing on the island of Guadalcanal in the Solomon Islands. However, Pacific Commander-in-Chief Adm. Chester Nimitz also conceived of a commando raid to divert Japanese forces and gather intel. He ultimately dispatched A and B company of Carlson’s Raiders to launch a hit-and-run raid on a Japanese seaplane base on Makin Island, allotting them a month of preparatory training time.

Makin, now known as Butaritari, is a tiny triangular-shaped atoll at the northern tip of the Gilbert Islands, located just north of the equator between Hawaii and Papua New Guinea. Seventy-five Japanese personnel, including a platoon of around forty-seven Special Naval Landing Force marines, maintained a refueling base in the atoll’s lagoon, circumscribed by an eight-mile long road. The Allies had only sketchy photographic intelligence on the actual Japanese forces present, and estimated there could be as many as 300 troops on Makin and a shore battery overlooking the lagoon.

To get Carlson’s men into striking position, the navy assigned two huge cruiser submarines, the USS Nautilus and Argonaut, the largest in the U.S. Navy at the time. Designed for long-range patrols, they disposed of two powerful 6-inch deck guns, and each displaced more than 4,000 tons submerged.

Even with two 100-meter long super-subs, there was just barely enough room to fit 221 men of A and B Company on board, forcing them to depart minus a platoon from each company. One man Carlson tried to leave behind was Maj. James Roosevelt—the thirty-five-year old son of the U.S. president. Despite having served as a political counselor and even secret diplomat on behalf of FDR, the young Roosevelt had been enlisted in the marines after the outbreak of World War II. An advocate of the Raider concept, he pulled strings with his father to ensure he got a place on the raid.

Conditions during the transit were miserable, with the Raiders packed into vacated torpedo storage tubes. The submarines’ ventilation systems could not prevent the air from growing thin and temperatures from rising to over 90 degrees Fahrenheit. Twice a day, the boats would surface to allow the Raiders to exercise and breath in fresh air for exactly ten minutes on deck, before the vessels ducked back into the hot Pacific waters to avoid air attack.

At midnight on on August 16–17, the two submarines surfaced just outside of Makin’s coral reef—only to discover stormy waters racked by wind and rain. The first two rubber LCRL boats put into the water washed away in the surf. The uninsulated 6-horsepower engines on the remaining launches were swamped with seawater and many failed to start. Carlson quickly realized that the two-prong attack he had planned would be too complicated to execute under the stormy conditions and instead ordered A and B company to land together. However, in the confusion, the boat carrying Lt. Oscar Peatross and eleven more Raiders didn’t receive the orders and motored off to the western side of the island.

After struggling for an hour with the surf, Carlson’s Raiders finally landed around 5 AM, with some of the units badly scattered but apparently undetected. The Raiders were bristling with automatic weapons, as one of Carlson’s innovations was to divide his squad into three fireteams, each including one rifleman with a semi-automatic M1 Garand rifle for distance shooting, another man with a Thompson submachinegun for close range firepower, and a Browning Automatic Rifle gunner to provide covering fire. For heavy weapons, they had .30 caliber light machineguns and .55 caliber Boys anti-tank rifles Carlson had specially requisitioned from the Canadian Army.

Unfortunately, upon landing a Raider accidentally fired a burst from his BAR, eliminating any hope of achieving surprise. The garrison’s commander, Chief Petty Officer Kyuzaburou Kanemitsu, had already been placed on alert several days earlier, and his men snapped into action, deploying by bike and truck to to confront the American invaders. The Raider’s misadventures continued when they captured a Japanese soldier, but then grew distracted, and shot the captive when he made a break for it.

Carlson had made contact with the natives of Makin, a few of whom spoke pidgin English. They were happy to help the Americans, and told them that there were between 160 and 300 Japanese on the island, and that they had been prepared for their coming. Wearily, the Raiders continued the advance when at 6 AM the scouts of 1st Platoon of A Company, under Lt. Le Francois, spotted Japanese troops dismounting from trucks.

Quickly, Le Francois put his platoon into an ambush position in a grove of breadfruit trees on high ground. Sgt. Clyde Thomason ran down the line of men, adjusting their positions as the Japanese approached in skirmish formation. Once the Japanese had closed within short range, the marines opened fire, wiping out the closest attackers, and blasting the truck’s engine with an anti-tank rifle.

Carlson soon threw in the 2nd Platoon into the fray—it suffered nine casualties in fifteen minutes—then rushed in B Company. Raider machine gunner Cpl. Leon Chapman dueled with a Japanese machine gun nest at a range of 200 meters, unleashing 400 rounds. Inspecting the silenced position afterwards, Chapman “almost threw up” when realized that he had killed a dozen Japanese who had sacrificed themselves one after another to man the weapon.

Meanwhile, Peatross’s squad of a dozen soldiers had landed at the second landing zone and advanced unopposed through the barracks and into the defender’s command post. The isolated squad shot a half dozen surprised Japanese before being pinned down by a light machine gun team. Pvt. Vernon Castle was hit several times as he advanced, but crawled close enough to toss a grenade and kill the crew of three before dying from his wounds.

Afterwards, Peatross’s marines shot up a car zooming towards the command post, blew up a radio and a truck full of ammunition, and withdrew back to the safety of the Nautilus that evening, having lost two additional men. At some point amidst the mayhem, they had killed Kanimetsu, who had destroyed the classified documents and sent a final message “We are dying defending the island.”

Earlier, the Nautilus had begun blasting the Japanese positions with two dozen shells when at 7 AM Carlson radioed intel acquired from the natives that there were enemy ships in the lagoon. Unwilling to risk entering the line of fire of a potential shore battery, the Nautilus arced sixty-five 6-inch shells over the palm tree line into the lagoon. By remarkable luck, the indirect fire sank two vessels, causing a transport to burst into flames and a patrol boat to catch fire. But then a mistaken sighting of an enemy airplane caused the submarine to dive, bringing an end to the naval gunfire support