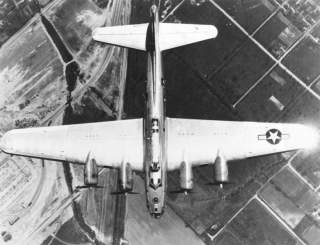 Allied troops spent six bloody weeks stuck in dense hedgerows of Normandy after the D-Day landings, fighting the German Wehrmacht one cow pasture at a time. U.S. Army general Omar Bradley cooked up a plan to break through the German defenses by calling upon the heavy four-engine bombers of the 8th Air Force.

What followed was one of the worst friendly-fire incidents in the history of the U.S. Army — and one of its greatest military victories.

The D-Day landings on June 6, 1944 in Normandy are famous for being one of the costliest military operations in American history. What’s less appreciated is that the following two months of combat in the farmlands of Normandy were just as nightmarish.

The problem was the terrain. Farmers in Normandy divided up their pastures with tall hedgerows called bocage that were impassible to most vehicles. Even though the Allies possessed tremendous numerical superiority and greater mobility due to their vast motor pool, the hedgerows forced them to fight in one short range ambush after another through predictable corridors — a tremendously advantageous situation for the defending German army.

Allied tanks attempting to advance up the narrow country lanes had to contend with well-concealed anti-tanks guns and German armor, including Tiger and Panther tanks with frontal armor nearly impenetrable to most Allied tank guns.

U.S. troops sustained some of the heaviest casualties in the war in Normandy, advancing just a few hundred meters a day. Some U.S. divisions took greater than 100-percent casualties — but they avoided bleeding out through a steady flow of inexperienced replacements.

The Americans nonetheless managed to slowly creep forward over the course of six weeks at tremendous cost — 39,000 killed or wounded by the end of June alone.

The Allies’ greatest advantage was air superiority — swarms of American fighter-bombers roamed over Normandy, largely unopposed by German fighters, devastating German units attempting to move in daylight. American troops also called on them to take out enemy strongpoints and tanks — but often battles in the bocage were fought at such short ranges that it was unsafe to call in air support.

In an effort to break through the bocage, the British forces on the eastern flank of the Allied beachhead under the leadership of Field Marshall Bernard Montgomery on July 18 launched a massive tank assault toward the city of Caen called Operation Goodwood.

Preceded by carpet bombing that leveled much of the city — killing around 3,000 civilians and largely missing German front-line units — the British tanks surged forward without infantry support and ran straight into anti-tank guns and panzers rushed in as reinforcements, including massive King Tiger tanks.

Accompanied by too little infantry to ferret out the ambushes, the British lost no fewer than 300 tanks in three days and Goodwood ground to a halt. Supporting attacks by Canadian troops met a similar fate.

Supreme Allied commander Gen. Dwight Eisenhower was furious with Montgomery, who maintained in his defense that the real goal of Goodwood had been to draw away the German panzer divisions in reserve, allowing the Americans to launch the real breakout.

While it remains debatable that this was what Goodwood has been intended to accomplish, it was undeniably a consequence — six panzer divisions had been deployed to the British sector, while only two faced the American sector to the west.

American general Omar Bradley had identified the main German defensive line as running along the east-to-west road connecting the cities of St. Lo and Perrier. He wanted to blast a hole in it through the through which his tank divisions could drive into the open country south of Normandy.

The secret weapons for the attack, called Operation Cobra, were the massive four-engine strategic bombers of the 8th Air Force.

The famous B-17 Flying Fortress and B-24 Liberator were designed to carpet-bomb factories and cities, not take out troops on the front line. A Flying Fortress could drop up to 17,000 pounds of bombs, sending massive explosions rippling over large swaths of the ground.

Bradley designated a zone five kilometers long by two kilometer deep to the west of the city of St. Lo that he wanted the 8th Air Force to blast into oblivion.

However, his troops needed to advance next to the German defensive line so that they could immediately exploit the shock of the bombardment. On July 18, American infantry drove the 2nd Fallschirmjäger Corps out of St. Lo at a cost of 5,000 casualties. The American lines to the west were now directly facing the infantry and tanks of the Panzer Lehr Division.

Panzer Lehr had been reduced to just 2,200 soldiers and 47 operational Panzer IV and Panther tanks, roughly a quarter of its theoretical strength. A poorly-trained 500-man parachute regiment and a small reserve battlegroup of 450 men accompanied it.

However, Bradley’s plan had a significant problem. Weapons as imprecise as a B-17 were as likely to hit friendly troops as they were the enemy. Bradley reassured the 8th Air Force that he would pull back his troops 800 meters just before the bombardment. The Army Air Force generals insisted the minimum safe distance was 3,000 meters. After some haggling, they settled on a gap of 1,200 meters.

Bradley also stipulated that the bombers approach parallel to the front-line troops, so if any of them released their bombs too early, they wouldn’t land on the American lines.

The VIIth Corps, comprising six divisions, would lead the attack under Gen. Joseph Collins. On the left and right flank were the 9th and 30th Infantry Divisions respectively. Both divisions had seen heavy combat and sustained over 100-percent losses in the preceding weeks, and were reduced to a hard core of exhausted veterans surrounded by hordes of rookies. The fresher 4th Infantry Division would attack down the center.

Waiting in reserve were the 1st Motorized Infantry Division and the powerful 2nd and 3rd Armored Divisions. These were the only two heavy armored divisions in the U.S. Army, each with more than 300 Sherman and Stuart tanks in six battalions, instead of the usual compliment of around 200.

The Americans had a new trick to deal with the Normandy hedgerows. When a fellow soldier suggested the tanks needed giant hedge clippers to traverse the bocage, Sgt. Curtis Culin went ahead and made some out of scrap metal from D-Day beach obstacles.

“Rhino tanks” fitted with the metal prongs could plow through the hedgerows without exposing their thin belly armor. Up to 60 percent of the VII Corp’s tanks were equipped with the device before the attack.

Nonetheless, Bradley didn’t want to repeat the mistakes of operation Goodwood. Tanks were vulnerable in the close Normandy terrain to ambushes. He intended to have infantry lead the initial assault with only limited tank support. Once the German defenses were breached, the armored divisions could plunge through the gap.

But timing was key — if he waited too long to unleash the armor, the Germans would have enough time to form a new defensive line.

Waiting in the wings was Gen. George Patton’s 3rd Army. Normandy’s cramped front line and limited road network had prevented the 3rd Army from being deployed into battle. If Bradley’s attack succeeded, then it would finally have enough space to go roaring through the German rear lines.

After several delays because of bad weather, on July 25, clear skies were recorded and the bombers of the 8th Air Force leaped into action. However, as the bomber formations approached Normandy, grey clouds reappeared.

The attack was called off — but not before over 100 aircraft dropped their bombs. Sixteen B-17s dropped their bomber two kilometers north of their target, hitting the 30th Infantry Division. Twenty-five American soldiers were killed and over 130 wounded. Enraged troops of the 120th Infantry Regiment even opened fire on the American planes.

Bradley was furious — the aircraft had approached perpendicular, not parallel, to the American lines. The commander of the 9th Air Force, Gen. Elwood Quesada, whose fighter bombers had approached parallel, sent a reproachful message to the 8th, as well.

The Army Air Force generals argued that approaching parallel would not prevent collateral damage and would expose the lumbering bombers to flak for a prolonged period. Besides, it would take days to draft a new plan of attack.

Worse, the U.S. troops then had to attack to recapture all the ground they had ceded when pulling back for the bombardment. This was accomplished at the cost of 174 killed or wounded by German troops who had infiltrated the abandoned positions. The Panzer Lehr Division lost 350 men and 10 tanks in the day’s action, but its commander, Gen. Fritz Bayerlein, assumed it had successfully resisted the main assault.

The Germans were bewildered and elated when American infantry withdrew from their positions again early the next morning. “It seems as if they’ve chickened out!” observed a divisional operations officer.

Clear weather on July 26 allowed the 8th Air Force to go in for real. The attack began with dive bombing, strafing and rocket attacks by 550 fighter bombers. Then the entire strength of the 8th Air Force, over 1,800 bombers, flew in.