In 1985, a Russian Submarine Created an Atomic Disaster. The Radiation Lingers to This Day. 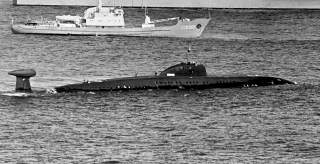