In 1993, a Russian Missile Sub (Armed with Nuclear Weapons) Smashed into an American Attack Submarine 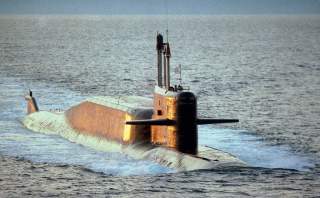 One of the tropes in espionage movies is the scene where one spy shadows another until the mark suddenly disappears. Usually the tailing agent rushes forward in an effort to relocate the quarry, and sometimes bumps face first into them.

This is pretty much what happened when the submarine USS Grayling lost its contact with the Russian K-407 Novomoskovsk on March 20, 1993, off the Kola Peninsula.

Just thirteen months earlier, there had been another embarrassing collision when the Russian submarine B-276 surfaced into USS Baton Rouge. The problem in that case, as well as in the 2009 collision between French and English nuclear ballistic-missile submarines, was that neither vessel had any clue as to the presence of the other.

In this incident, however, the eighty-nine-meter-long Grayling had been tracking the K-407 for several hours. Commissioned in 1969, the American boat was one of the older nuclear-powered Sturgeon-class attack submarines that had served as workhorses in the Cold War.

An attack submarine is intended foremost to hunt down enemy ships. Topping the list of targets are an adversary’s ballistic-missile submarines—or “boomers”—whose job is to launch nuclear missiles from underwater in the event World War III breaks out. It had therefore been U.S. policy to station attack submarines near Soviet naval bases in order to tail boomers leaving port. Had the Cold War rivals spiraled into a nuclear exchange, the American attack submarines would have been in position take out much of the Soviet Union’s underwater nuclear strike force. This policy continued after the fall of the Soviet Union.

Novomoskovsk had been commissioned only three years earlier, and was the last of the quiet Delta IV–class nuclear ballistic-missile submarines to be built. At 166 meters long, it was nearly twice the length of the Grayling, and displaced more than four times the weight. Its hump-backed hull accommodated sixteen RSM-54 submarine-launched ballistic missiles (SLBMs), each carrying four independently reentering nuclear warheads. Novomoskovsk had been the first submarine ever to rapidfire sixteen ballistic missiles at once in a test in 1991, following a failed attempt by its older sister Yekaterinburg in 1989.

K-407 had departed from its base in Severomorsk on a training cruise in the Barents Sea, 120 miles north of Murmansk. At the time, about 60 percent of Russia’s ballistic-missile submarines were stationed in the Arctic region around the Kola Peninsula, which lies just east of Russia’s borders with Finland and Norway.

The Novomoskovsk’s crew was oblivious to the presence of the quiet American submarine trailing roughly seven miles behind it. At around a quarter past midnight, Capt. Andrei Bulgakov swung K-407 around while it was seventy-six meters deep and began to head back to port.

The Sturgeon lost sonar contact with the Russian boomer. Like the tailing agent in the spy movie, Capt. Richard Self sped up his submarine in an attempt to close the gap and reacquire sonar contact. He did eventually, only to discover the K-407 was just 0.6 miles away and heading straight towards the Grayling!

At this point, we might imagine we were witnessing an underwater Fast & Furious movie. In fact, the Sturgeon had accelerated to just between nine and seventeen miles per hour, while K-407 was swimming at around twenty miles per hour. This implies the Sturgeon had between sixty and seventy-five seconds to attempt to lumber its 4,300-ton bulk off a collision course.

Captain Self did his best to turn and surface the Grayling, but the “speeding” American submarine had too much momentum, and too little time.

At 12:46 AM, the crew of the Novomoskovsk was stunned to hear a long screeching impact as the American submarine glanced off its upper starboard bow. Only afterward did the Russian submarine’s sonar detect the Sturgeon.

The American vessel circled around and made sure that the K-407 had not sustained serious damage before both vessels sailed back to their home ports.

Luckily, no one was injured and the damage was not too severe. The outer hull of the K-407 had a “small dent,” according to Moscow—other sources state it was a long scratch—but its hull was not breached. The Grayling received only minor damage.

However, it very nearly could have been much worse. According to an article in the Atlantic, had the Grayling impacted five seconds later, the American submarine would have struck K-407 along its nuclear missile bay, possibly rupturing the hull and spilling the deadly weapons into the sea.

The collision occurred, rather awkwardly, just before a summit between Boris Yeltsin and newly-elected president Bill Clinton, perpetuating a long tradition of mishaps in U.S. espionage occurring just before important diplomatic meetings. Yeltsin complained repeatedly about the episode, prompting Clinton to apologize and promise an inquiry. In the end, the Navy reformed its training and operational procedures and scaled back some submarine operations. However, the policy of tailing the ballistic-missile submarines of potential adversaries was not halted.

Why did the Grayling lose track of the Novomoskovsk despite the fact that it was heading right in its direction?

A submerged submarine trying to remain stealthy is constrained to listening to the water around it to detect approaching vessels. However, the background noise is several times louder in the shallow waters off of the Barents Sea, and a Delta IV is one of the quieter Soviet-era submarines. Furthermore, the acoustic profile of a submarine is weaker to the front than to the side because the submarine’s long hull absorbs more of the sound.

Those factors combined explain why the Grayling wasn’t able to detect the K-407 until too late—though fortunately with just enough time to avoid a much more catastrophic impact.

K-407 has continued to serve with distinction in the Russian Navy. The aging Grayling remained operational several more years and was finally retired in 1997.