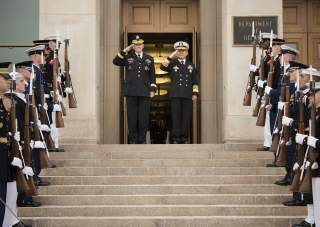 For seventy years, since Congress created the modern U.S. national security system, it has handicapped military decision making by limiting the role of the Joint Chiefs of Staff.  The 1947 National Security Act (NSA) created the Department of Defense headed by a cabinet-level secretary as well as the Joint Chiefs of Staff representing the Army, Navy, Marine Corps and newly-independent Air Force.  But seeming to succumb to wartime propaganda that placed much of the blame for German and Japanese militarism on the influence of their respective military leaderships, the NSA deliberately limited the responsibilities of the Joint Chiefs in furtherance of the principle of civilian control of the military. In view of the evolving nature of modern warfare -- multi-dimensional, high-speed and involving both traditional and hybrid means -- it is time to reconsider this reflexive attitude.  21st century warfare will require a new national military command structure, an American General Staff.

In the 1990s, when the Goldwater-Nichols legislation to reform the national security system was being formulated, the question of converting the Joint Staff into a General Staff was hotly debated. At the time, the decision was made to give the Chairman of the Joint Chiefs of Staff responsibility as the President’s principal military advisor but not to put him or the Joint Staff in direct command of military forces.

The military has been struggling for years to come up with a concept of 21st century warfare, one that reflects changes in military capabilities, the rise of new threats, the beginning of the end of U.S. military-technological superiority, continuing budget pressures and a decline in the size of the force.  It makes little sense to have an operational military command structure split between regional Combatant Commands and those such as Special Operations Command, Transportation Command and Strategic Command with global responsibilities. Then there are the defense agencies and organizations that also cross regional jurisdictional lines such as the Defense Information Systems Agency and the Joint Improvised-Threat Defeat Organization. The role of the services is to organize, train and equip forces and hand them off to the Combatant Commands. The military chain of command runs from the President through the Secretary of Defense to a dozen Combatant Commands. There is no effective unifying military entity to provide overall operational command.

New technologies and threats are driving the services to develop operational concepts that recognize the need to organize and employ the full range of military forces without reference to classic service-centric silos. First among these was AirSea Battle, developed jointly by the U.S. Air Force and Navy, which has a concept of operations that seeks to counter advanced and asymmetric threats by integrating the full range of the two services’ capabilities. Separately, the Navy has been developing concepts and capabilities to integrate all its sensors, weapons and battle command under the headings of Naval Integrated Fire Support-Counter Air and Distributed Lethality.  The former has even been tested employing a mix of Navy and Army air defense systems using common sensor data through an integrated communications network.

The Air Force and Army have now gone even farther with their concepts for Air Superiority 2030 and Multi-Domain Battle, respectively. Brigadier General Alexus Grynkewich, head of the team that developed Air Superiority 2030, described the challenge confronting his service and the intent of the new operating concept thusly:

Air superiority in 2030 must account for a multi-domain battlespace where air, space, and cyberspace converge. We must ensure we give weight not just to necessary advances in raw combat power across those domains, but also to equally critical basing and logistics, ISR, and command and control capabilities.

The Army’s concept for Multi-Domain Battle basically seeks to break out of a service-based operating concept and empower commanders to employ the full range of military capabilities available throughout all domains -- land, sea, air, space, cyber/electronic warfare and information. As described by two experts on the new concept:

Land forces, therefore, must see themselves not just as a receiver of assistance from the other services but as a true partner capable of enabling, acting for, supporting, and even controlling operations in the other domains. By exploiting new technologies, including precision missiles, long-range strike, and advanced sensors, land forces can rethink how they fight and thereby make a more effective contribution to the joint fight.

The key to all the concepts for integrated, multi-service operations is a unified command and control system and a seamless communications network that passes information and orders from anywhere to anywhere. Creating such a command, control and communications structure cannot be achieved by individual service efforts that somehow grow together. This needs to be directed from the top, by a revamped Joint Chiefs of Staff.

Today’s Joint Staff does a good job managing an overly-complex and segmented defense hierarchy. In many ways it is still bogged down refereeing disputes between quasi-independent military services and striving to bring some degree of coordination and collaboration to a decision-making process that is still based on service fiefdoms. Recent reforms designed to give more authority to the service chiefs could make this problem worse.

The Office of the Secretary of Defense is incapable of providing the necessary direction and control over conflicts that will inevitably be multi-domain and employ resources from all the services. The perspective of the Combatant Commands is too restrictive.  Nor does the current structure address the challenge of multi-theater, multi-adversary conflicts. What is needed is a true General Staff that can provide the necessary direction and, in the event of a major conflict, control over global and theater forces throughout all domains.