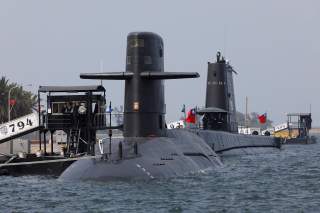 No country is more threatened by China’s growing military and economic power than the island of Taiwan. Beijing has always considered Taiwan a renegade province that it vows to once again control.

For most of their history since 1949, however, China did not have the military power to conquer Taiwan by force. Indeed, for many decades Taiwan’s military was qualitatively superior to the mainland’s. Furthermore, even after the United States established diplomatic relations with the People’s Republic of China, it has promised (somewhat ambiguously) to defend Taiwan from a Chinese invasion. This was often backed up in action such as when Bill Clinton sent two U.S. aircraft carriers into the Taiwan strait after China tried to intimidate Taipei with missile tests around the island in the mid-1990s.

The dynamics between Taiwan, China and the United States are changing rapidly as a result of Beijing’s meteoric rise. Making matters worse, President Xi Jinping has taken a much more aggressive stance towards Taiwan since he took power This has included increasingly frequent and intense military exercises around Taiwan.

After decades of double-digit growth in its defense budget, China’s military is now vastly superior to the Taiwanese armed forces. Nonetheless, conquering Taiwan would not be a walk in the park for China. The reason is simple: Beijing would need to mount an amphibious invasion. Amphibious invasions have always been among the most difficult military operations to pull off, but this is especially true in the era of precision-guided missiles and stealth submarines.

Still, Taipei desperately needs to strengthen its military capabilities, and doing so could be best achieved by looking abroad. Here’s three weapons that Taiwan could purchase to defend itself against a superior Chinese military.

Taiwan’s best approach for stopping a Chinese invasion is to pursue an anti-access/area-denial (A2/AD) strategy. And, as other countries like Japan and Vietnam have correctly surmised, an A2/AD strategy against China should make heavy use of submarines as Beijing’s anti-submarine warfare (ASW) capabilities have traditionally been fairly weak. In the scenario considered in this article, Taiwan’s submarines would lie in wait and pick off Chinese naval ships, including those transporting troops for the invasion. They could also protect the Taiwanese homeland by taking out Chinese land targets such as missile systems.

Taiwan’s undersea capabilities have atrophied in recent decades in part because no country has been willing to sell it submarines for fear of Chinese reprisals. But for this exercise we can ignore these political realities. Thus, while ultimately it is more likely (although still unlikely, if the recent past is any guide) that a country like Japan or a European country would sell Taiwan submarines, here we go with a South Korean boat.

Tokyo’s Soryu-class submarines are much larger and capable but also more expensive. Since Taiwan wouldn’t need its submarines to operate far distances, it makes sense to go with larger numbers of smaller and less capable boats. Plus, Won-il-class vessels are no pushovers.

Based on Germany’s Type-214 submarines, the vessels displace about 1,800 tons with a length of 213 feet and a width of twenty-two feet. Unlike South Korea’s Chang Bogo-class boasts, Won-il-class subs are equipped with Air Independent Propulsion (AIP), which allows them to stay submerged for about two weeks (roughly twice as long as the Chang Bogo-class). They also have a diving depth of 1,312 feet, and their underwater speed is reportedly about twenty knots. The ISUS-90 submarine combat systems allows the Type 214 vessels to engage three hundred targets simultaneously. And they reportedly can “operate various missions such as anti-ship, anti-air and anti- submarine warfare as well as ship-to-land precision strikes with cruise missiles.”

This means that while their main objective would be to sink Chinese ships, they could also conduct targets on the Chinese mainland. For instance, South Korea’s Won-il-class subs are equipped with the Haeseong-3 missile, a supersonic, stealth precision-guided ship-to-surface missile with a range of 1,500 kilometers. Seoul would use these to target key North Korean missile sites in the event of a conflict. Taiwan could similarly target Chinese missile sites.

That would be important because one of the biggest threats that China poses to Taiwan comes from its extensive missile arsenal. According to Taiwan’s Defense Ministry, Beijing keeps roughly 1,500 missiles pointed at the island nation at all times. In the opening salvo of a conflict, China would rain missiles all over Taiwan in anticipation of an invasion.

Given the sheer numbers involved, there is no way Taiwan can protect the entire country from Chinese missiles. But not all parts are equally important. China is likely to target key parts of Taiwan’s defense capabilities, such as command and control centers, Taiwan’s aircraft and airstrips, and its air defense and missile systems.

Enter America’s Terminal High Altitude Area Defense (THAAD). As the name implies, THAAD is designed to destroy missiles in their terminal (final) phase whether inside or outside the atmosphere. That is ideal given the short distance missiles would be traveling from China to Taiwan. Each THAAD battery comes with six launchers with roughly eight interceptors per launcher. Thus, each THAAD battery should have at least forty-eight interceptors, although Lockheed Martin, which manufacturers the system, has claimed there are actually seventy-two interceptors per battery. While all missile defense systems are highly imperfect, THAAD has proven better than most in testing.

The system doesn’t have great range but it wouldn’t need to. For Taiwan’s purposes, THAAD would simply be deployed near key assets to prevent them from being destroyed at the beginning of a war. For instance, having a THAAD battery near important air strips could allow its fighter jets to disperse rather than be destroyed on the ground. THAAD is also mobile and therefore less vulnerable to Chinese missile attacks.

Besides submarines, the centerpiece of any Taiwanese A2/AD strategy would be anti-ship missiles (ASM). Although Taiwan already has ASMs, it could use an upgrade. Unfortunately, the United States has let its capabilities in this area lag in recent decades. Although Washington is trying to rectify this with the Long-Range Anti-Ship Missile (LRASM), this missile is still being developed. Plus, it is only being built for air and ship-launched purposes at this time.

Enter the BrahMos, a supersonic missile jointly developed by Russia and India. Although variants of the missile have now been developed for all sorts of missions, it began as an ASM. It is also extremely diverse, with land, ship, and air-based ASM variants.

As far as capabilities, BrahMos Aerospace, the joint organization created to develop the missile, explains that it is a “two-stage missile with a solid propellant booster engine as its first stage which brings it to supersonic speed and then gets separated. The liquid ramjet or the second stage then takes the missile closer to 3 Mach speed in cruise phase. Stealth technology and guidance system[s] with advanced embedded software provides the missile with special features.” Along with its high-speed and stealthy features, it flies close to the ground to evade enemy defenses. It usually carries a two-hundred-kilogram warhead, although the air-launched variant can carry a three-hundred-kilogram one.

But Brahmos’ greatest advantage remains its incredible speed. As Kyle Mizokami has explained: “The missile’s speed of Mach 2.8 translates to 952 meters per second. Assuming the defender’s radar is mounted at a height of twenty meters, Brahmos will be detected at a range of twenty-seven kilometers. This leaves the defender with just twenty-eight seconds to track, illuminate and shoot down Brahmos before it impacts the ship.” It does have a limited range of roughly 180 miles, but this should be sufficient given Taiwan’s proximity to China.