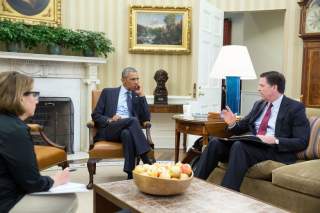 How many red flags does it take to see that Islamist-related terror is increasing?

In the past seven months there have been high-profile terror attacks in Paris, San Bernardino, Brussels, and in Orlando.

In the U.S. the number and frequency of Islamist plots has been growing. Before Orlando, the U.S. alone has been the target of at least 85 Islamist-related terrorist plots since Sept. 11, 2001.

The attack in Orlando is the 22nd plot since 2015. To put this increase in perspective, more than a quarter of domestic terror plots in the U.S. since 2001 have occurred in the last 18 months.

With this serious threat not diminishing, it is time for a nonpartisan sober assessment of the threat of terrorism to the United States.

Fourteen years ago, President George W. Bush and Congress set up the 9/11 Commission to look at the attacks of 2001. Now it is time for Congress to convene another report. The horrific terrorist attack in Orlando only reinforces that it is past time for this.

Here are four main reasons why:

1. The threat has changed. When the 9/11 Commission looked at the threat of terrorism in 2010, the face of terrorism looked very different then it does today. Back then the U.S. was principally focused on al-Qaeda, rather than the Islamic State, also known as ISIS.

Today, the transnational terrorist threat has rebounded, and the clear breakpoint for this was in 2010. One of the indicators is the flood of foreign fighters moving around the world.

2. What we are doing now isn’t working. In 2010, the Obama administration embarked on a counterterrorism strategy ill-suited to deal with present threats. It is obviously not working.

It is therefore time for a fresh, nonpartisan appraisal of what works and what doesn’t.

3. The Obama administration has lost credibility on this issue. In January my colleague Jim Phillips noted that:

The Obama administration’s lack of a sense of urgency in the face of the ISIS onslaught has been breathtaking. The president even proclaimed the day before the Nov. 13 Paris terrorist attacks that ISIS was contained.

The immediate angry reaction many American’s expressed to President Barack Obama’s statement on the Orlando attack points to the growing distrust many have with how his administration has responded to the threat of global terrorism.

4. The 9/11 Commission worked. The commission’s hearings and findings helped Americans understand the nature of the global terrorist threat. The final report became a national bestseller—and with good reason.

Arguably, there is an even great need for such clarity now. Americans are more confused, divided, frustrated, and uncertain about how to deal with transnational terrorism than they were a decade ago.