5 Reasons Not to Be Gloomy About Brazil 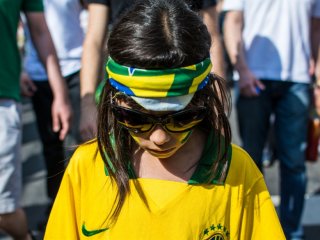 Brazil is in the midst of the longest recession of the democratic era that began in 1985. Between 2015 and 2016, the economy will shrink by 7 percent, more than in any other two-year period in the past century. The Economist’s dire cover story this week summarized the sad state of affairs: a downgrade in the country’s debt to junk status, a massive corruption scandal, rising public debt, two-digit inflation, and a rudderless political system, all contributing to “Brazil’s Fall.”

Many Brazilian pundits and academics agree on what needs to be fixed. In the short term, to rein in government spending—the nominal deficit now stands at 10 percent of GDP—they call for shrinking government credit subsidies, reforming the social security system and reducing the overall size of the public sector. In the longer term, these analysts argue for improving competitiveness, boosting innovation, and above all, restoring the industrial sector.

Given the depth of the crisis, 2016 was always going to be a painful year. Making it worse is the government’s inability to do much to soften the blow. The December departure of Finance Minister Joaquim Levy, who proved to be less of a fiscal scissorhands than markets hoped, underlined the huge political challenge of fiscal reform. The governing Workers’ Party (PT) has been ambivalent, if not just plain opposed, to austerity measures. Its fickle allies in the centrist PMDB have been unwilling to take up the burden without a clear sign of government commitment, and the opposition is happy to bleed President Dilma Rousseff dry. Congressional backing for the government has fallen, and the cost of legislative support has risen in inverse proportion to the perceived weakness of the Rousseff administration. The tragic result is that the very reforms that might build the foundation for restoring growth seem unlikely in 2016, or even during the remainder of Rousseff’s second term, which is not scheduled to end for another one thousand days.

If anything, the political climate is likely to worsen in the new year. Although impeachment still seems unlikely, it will continue to dominate Brasília’s attentions when Congress returns to session in February. Whatever bandwidth remains will probably be filled by the Lava Jato and Zelotes investigations, which are increasingly focused on senior political figures. In this climate, neither the government nor Congress will push for legislation that requires super-majorities, such as tax, electoral, pension, or civil service reforms. Public consensus about these themes has not yet coalesced, and some pundits argue that the situation may need to worsen even more before politicians are willing to undertake such unpopular choices.

Where are the upsides, then?

1) Even though little legislative action is expected, the economic crisis is forcing state-owned companies, and state and municipal governments, into belt-tightening and innovation of their own. Already some states are rethinking their opposition to public concessions, and state firms are reaching out to the private sector for investment. This may lead to a slow dismantling of the crony capitalism at the heart of the Lava Jato scandal.

2) The lousy economic outlook combined with political crisis has led to a more than 45 percent depreciation in the real from its strongest point in 2014, an adjustment that—albeit inflationary—will improve industrial competitiveness, and contribute to a correction in the uncompetitive real overvaluation of domestic assets.

3) The much-lauded improvement in the performance of the anti-corruption bureaucracy has been slow in coming but revolutionary in its effects. The innovative use of anti-money laundering statutes by the prosecutors and judge at the heart of Lava Jato is being widely studied throughout the judicial system. Already the scandal has contributed to changes in campaign finance, with the high court ruling corporate electoral contributions unconstitutional, and Lava Jato has given new impetus to a popular initiative spearheaded by prosecutors to further strengthen anti-corruption laws.

4) Rousseff’s desperation may lead to beneficial outside-the-box policy initiatives—perhaps working with Argentina’s Macri to remake Mercosur for the post-Chávez era, taming the burgeoning public sector debt, or even rethinking the long-standing labor code. This may be the only means of improving Rousseff or her party’s standing in the run up to October’s bellwether municipal elections.

5) Finally, as the Economist pointed out, Rousseff can’t afford to lose another finance minister, after replacing two in 2015. This gives Nelson Barbosa considerable power, and may enable him to build support for emergency fiscal measures.

While none of these are exactly silver linings, they could, along with the Rio Olympics, bring hope to a beleaguered nation.

Matthew Taylor is an adjunct senior fellow for Latin America Studies at the Council on Foreign Relations. This article first appeared in Latin America’s Moment.