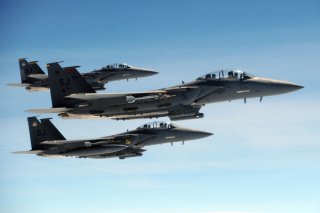 At a time when threats against America are growing, the U.S. military is facing a combat readiness crisis that jeopardizes its ability to protect the country. House Armed Services Committee Chairman Mac Thornberry, R-Texas, discussed this problem recently at The Heritage Foundation.

Thornberry explained that this readiness shortfall has occurred as a result of “budget cuts coupled with deployments, at a pace and a number that have not really declined very much.”

It doesn’t matter how many planes the Air Force has, or how modern they may be, if they can’t fly. Without qualified mechanics to maintain the aircraft and properly train pilots to fly them, the Air Force will struggle to accomplish its mission.

Readiness levels for the entire fleet have fallen as the Navy’s maintenance crews are being asked to work longer hours with less funding. More planes in maintenance mean fewer are available to meet mission requirements.

3. “Less than one-third of the Army is ready to meet the requirements of the Defense Strategic Guidance—it’s supposed to be no less than two-thirds.”:

The Army is already at a historically small level, and much of what remains of the service is not ready for combat. If a major war were to break out, the U.S. Army simply isn’t ready.

4. “Marine Corps aviation requires on average 10 hours of flight time a month and they are getting about four.”:

Like any skill, practice is essential. Pilots without practice make more mistakes, which become deadly when flying complex aircraft, especially when in combat. The lives of Marines are at greater risk because of these funding cuts.

5. “Less than half of the Air Force combat forces are ready to face a peer competitor such as China and Russia.”:

These five concerns that Thornberry brought up are the result of years of defense budget cuts that have left our military weaker and smaller. Unfortunately, there are many other signs pointing to both a weak military and rising threats abroad.

As new threats to America’s national security materialize daily, our men and women in uniform are being called on to achieve more with less. And as Thornberry put it, “it is wrong … to send people out on missions for which they are not fully prepared or fully supported. It is just wrong and unfortunately that is the trend.”

This negative trend can be reversed, but only with Congress’s help. It is time for Congress to use the fiscal year 2017 defense authorization bill to start rebuilding the military. The military’s combat readiness shortfall has become a crisis America can no longer ignore.