75 Percent of the Fighter and Attack Aircraft in the U.S. Marine Corps Can't Fly 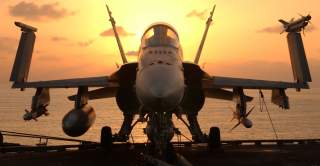 About 75 percent of the fighter and attack aircraft in the US Marine Corps—AV-8B Harriers, F-18A+/B/C Hornets, and EA-6B Prowlers—are out of service. The Marines are loving their F-35Bs so far, but the Lightning IIs are very expensive aircraft, particular when thrown against enemies who lack air forces—or even high-altitude air defense. As quotidian bomb trucks, they have far greater range than Hornets and Harriers, but that approach will put Marine Corps Aviation back into the same cycle of destruction it has experienced over the past 15 years. So what now? The alternative is to move towards a mix of attack aircraft tailored for two classes of enemy, in wars small and large. In the short term, that means buying fixed-wing gunships. In the mid-term, it means buying tilt-rotor gunships, including drones. Both aircraft types are better suited for the small wars in which the Marine Corps has been engaged for most of the post-Cold War era. For now, that might seem to destroy Marine Aviation, but to save it in the long term for the big wars.

Getting more long-range firepower is easy, as long as the Corps doesn’t mind operating from shore. In the short run—the next year or two—the Marines could more Harvest Hawk kits for their KC-130J Hercules. Actually, they already are. The Corps is already intending to buy enough to outfit all 79 of their KC-130Js with MX-20 sensor balls, Intrepid Tiger jamming pods, and launch rails for Hellfire, Griffin and Viper Strike missiles. The first engagement (with a Hellfire) was over Afghanistan in November 2010, so the Marines have some experience with this idea. The Harvest Hawk doesn’t bring gatling guns or the awesome sensor suite of the AC-130s, but it has killed a lot of Taliban. It doesn’t move nearly as fast as an F-18C, or even an AV-8B, but it loiters much longer. It isn’t well-suited for fighting enemies with robust air defenses, but not all enemies are so well equipped. As such, one could call it a Bob Gates, non-exquisite, 80-percent solution. All in all, the kits are in production, marines are trained to operate the aircraft, and the tanker-transport squadrons are flying every day. Check, check, and check.

The Marines could similarly kit up their MV-22B Ospreys like gunships. Wait—again, they’re getting ready to do so, as part of their 2017 Aviation Master Plan. While the details are yet forthcoming, the kit will include a telescopic forward-looking infrared sensor, a laser designator, and a launcher for the same repertoire of missiles as the KC-130J. As with the Harvest Hawk, this is an engineering problem, and not a fundamentally technological one. The armed Ospreys will escort the transport Ospreys (which easily outrun the AH-1Z Viper gunships) to the landing zones, just without Robert Duvall. Conveniently too, the Ospreys fly from helicopter carriers, as ideally all things Marine should. The kits are coming, marines are trained to operate the aircraft, and the tilt-rotor squadrons are flying every day, with rising availability. Call that check and check.

In the slightly longer run, as Kevin Murray argued in the October 2016 issue of Marine Corps Gazette, the Marines could buy something like the MQ-9 Reaper or the MQ-1C Grey Eagle, and fly it from bases ashore. The aircraft are in production, and the Air Force and the Army have units with crews. To keep this in-house, the Marine Corps would need to send its own people through training, and organize their own squadrons of large attack drones. Alternatively, the Corps could convert—at least temporarily—some fighter squadrons to drone duty. This could mean re-rolling F-18C and AV-8B squadrons for a time before their F-35Cs and F-35Bs arrive. This could seem duplicative of the USAF and the Army’s activities with the MQ-9 Reaper and the MQ-1C Grey Eagle, but it’s not as though the drones are undertasked today. Buying squadron-sets of bigger drones could also permit the Marine Corps to build some competency in flying a drone larger than the 545 RQ-21 Blackjacks it’s buying.

Pause a moment to consider that the Corps is buying over 500 short-range reconnaissance drones. The Marines already have more than 50 rather larger RQ-7B Shadow drones. By 2026, they want drones on helicopter carriers too. Last November, they got JROC approval for the concept, now called the Marine Unmanned Expeditionary aircraft (MUX). The MUXs could escort MV-22Bs as well, loiter above troops in contact, and form picket lines around the amphibious flotillas that the Navy doesn’t always protect well. Ideally, the Marines would like this rotorcraft MUX to be otherwise a close analog to the MQ-9 Reaper: an aircraft that can fly for 20 hours with a brace of Hellfire missiles or guided bombs. As Inside Defense, Defense News, Breaking Defense, and Flight Global have all covered, Bell Helicopter has been very obviously marketing its V-247 unmanned tilt-rotor concept against this stated need. DARPA and the Navy have a separate program with Northrop Grumman to build a tail-sitter drone called the Tern, and they’ve just ordered a second test aircraft. That could easily be a candidate for the eventual procurement program too.

Naval blogger Commander Salamander avers that drones lack the unjammable situational awareness of a pilot in the cockpit. That’s true. Then again, they're expendable, and the Marine Corps could, depending on the range to the nearest friendly airbase, easily fly more of them out to the fleet. They spot enemies over the horizon, and if another ship shoots one down, you have a flaming datum. They cost a heck of a lot less to operate than jet fighters, and they can fly longer than either. And remember, the Marines are already buying 500 of the shorter-ranged type, so they’ll be building bigly experience operating them.

With all this in context, it’s refreshing that HR McMaster is taking over at the National Security Council. His dissertation at UNC became the book Dereliction of Duty: Johnson, McNamara, the Joint Chiefs of Staff, and the Lies That Led to Vietnam (Harper Perennial, 1997). When the White House has yes-men pencil-whipping the war plans without asking hard questions about matching strategies to resources, the results can get ugly. Over the past two administrations, the Naval Secretariat and the Marine Corps brass had a hard time telling their superiors that all the deploying and flying and occasional bombing was effectively running the fleet into the tarmac, and for no good reason. Just the other day, a Marine F-18C pilot told me about his Persian Gulf cruise in 2006: his carrier kept a constant patrol over Mosul for four months, and in the process, dropped three bombs. For this, we should not blame the Corps so much as Central Command, but either way, using fighter jets like this was galactically wasteful.

Fairly, this is not a uniquely American problem. In 2015, then-British Prime Minister David Cameron called for more drones in the Royal Air Force, and simply because the RAF’s fast jets were working too hard. Reapers (or V-247s or Terns) might not fare well against Russian or Chinese jet fighters, but they take many hours off other airframes that can ill-afford the abuse. Those F-18Cs—which went out of production in Finland 17 years ago—were built to fly 6,000 hours. With enough work, they can be made to fly to another 3,000 to 4,000 hours. MQ-9s can fly for at least 20,000 hours, and maybe 40,000. Rebuilt C-130s can fly 40,000 hours past their overhauls. As the bankers say, that’s a ten-bagger.

Restoring the fleet will cost money. On the one hand, candidate Trump promised lots more for military procurement. On the other, President Trump has hired Mick Mulvaney as his budget director. The immediate question is whether to build what our colleague Ben Fitzgerald at the CNAS has called “the best military we possibly could from the 1980s,” or something else. The EA-6Bs will retire in two years anyway, its mission taken by the F-35s’ built-in capabilities, and electronic warfare payloads on RQ-7Bs and RQ-21s. The Marine Corps should seriously consider just how many of those AV-8Bs and F-18A+/B/Cs are worth saving at this point, and whether the savings from doing otherwise could be better spent on the fleet that’s actually flying, and tomorrow’s less expensive alternatives. To retrench for the future, the Marines will need top cover from Defense to avoid the regional commanders’ operational demands. But if they can get that, the Marines’ 75 percent hangar-queen problem may have an 80 percent solution.