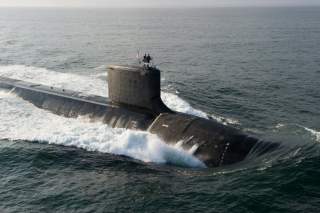 Navy leaders say the service is making progress developing new acoustic, sensors and quieting technologies to ensure the U.S. retains its technological edge in the undersea domain – as countries like China and Russia continue rapid military modernization and construction of new submarines.

The innovations, many details of which are secret and not available, include quieting technologies for the engine room to make the submarine harder to detect, a new large vertical array and additional coating materials for the hull, Navy officials explained.

“We are talking about changes in sensors and changes in the capabilities aboard the ship that we think could be very dramatic in terms of improving our ability to compete in our acoustic spectrum,” Rear Adm. Charles Richard, Director of Undersea Warfare, told Scout Warrior in a special interview.

Richard told Scout Warrior that the impetus for the Navy effort, called “acoustic superiority,” is specifically grounded in the emerging reality that the U.S. undersea margin of technological superiority is rapidly diminishing in light of Russian and Chinese advances in submarine technology.

The idea with “acoustic superiority,” is therefore to engineer a circumstance wherein U.S. submarines can operate undetected in or near enemy waters or coastline, conduct reconnaissance or attack missions and sense any movement or enemy activities at farther ranges than adversaries can.

Acoustic sensor technology works by using underwater submarine sensors to detect sound “pings” in order to determine the contours, speed and range of an enemy ship, submarine or approaching weapon. Much like radar analyzes the return electromagnetic signal bounced off an object, acoustics works by using “sound” in a similar fashion. Most of the undersea acoustic technology is “passive,” meaning it is engineered to receive pings and “listen” without sending out a signal which might reveal their undersea presence or location to an enemy, Richard explained.

Testing of these innovations is now underway on board an experimental prototype version of a Virginia-Class attack submarine called the USS South Dakota.

Described as a technology insertion which will eventually be integrated on board both Virginia-Class submarines and the now-in -development next-generation nuclear-armed boats called the Ohio Replacement Program.

“The testing going on with the acoustic superiority program is more on the sensor side of the house. We see ourselves on the cusp of a fourth generation of undersea communications,” Richard added.

The concept with a fourth generation of undersea technology is based upon a “domain” perspective as opposed to a platform approach – looking at and assessing advancements in the electro-magnetic and acoustic underwater technologies, Richard explained.

“In this fourth generation, acoustic stealth will always be required - get into a hostile environment. If I am noisy, I am not going to live very long. We are constantly pushing the boundary of how to minimize our own signature - while having a better ability to detect an adversary signature,” Richard told Scout Warrior.

Richard articulated the first two generations as the advent of the first operational submarine fleets during WWII and the subsequent advent of undersea nuclear weapons during the Cold War.

“WWII was our first time to field a fleet scale capability that was effective in a war. It actually helped us win,” he said.

While many of the details of these new emerging technologies are not publically available, service developers did say some risk reduction work on these innovations has been done on the other submarines such as the USS Dallas and USS Maryland.

The emerging technologies, however, are heavily focused upon sensitive, passive acoustic sensors able to detect movement and objects of potential adversary boats and ships at much further ranges and with a higher-degree of fidelity. While high-frequency, fast two-way communication is currently difficult to sustain from the undersea domain, submarines are able to use a Very Low Frequency radio to communicate while at various depths beneath the surface.

“Low frequency radio signals allow for slower communication. Water is opaque and it is also opaque to radio energy. We have the ability to use certain radio frequencies that do penetrate in the water but they tend to limit you in data rate and receive only. It’s very reliable and it well understood. Ballistic missile submarines are in constant communication,” Richard added.

The South Dakota is slated deliver in the next few years, Navy officials said.

Senior Navy officials have explained that the innovations contained in the USS South Dakota do, at least in part, help address an issue raised by a January report by the Center for Strategic and Budgetary Assessments.

“The physics behind most of these alternative techniques has been known for decades, but was not exploited because computer processors were too slow to run the detailed models needed to see small changes in the environment caused by a quiet submarine. Today, ‘big dat’” processing enables advanced navies to run sophisticated oceanographic models in real time to exploit these detection techniques,” Clark writes.

When asked about the pace of Chinese undersea military construction and modernization, Richard explained that the Navy is focused on sustaining the research and development, or R&D, sufficient to ensure the U.S. retains its technological superiority.

Richard added that the submarine fleet, and strategic nuclear deterrence in particular, is all the more pressing and significant now that China has operational nuclear-armed JL-2 missiles able to hit part of the United States.

The Chinese are currently working on a new, modernized SSBN platform as well as a long-range missile, the JL-3, Congressional information says.