Afghanistan Is in Bad Shape, and It Could Get Worse 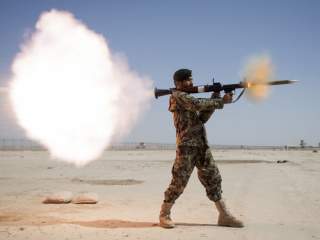 Those of us watching Afghanistan were not surprised at the findings of the most recent annual report by the UN Assistance Mission in Afghanistan (UNAMA) in cooperation with the UN Human Rights Office on the "Protection of Civilians in Armed Conflict."

Overshadowed by the violence in Syria, news from Afghanistan rarely makes headlines unless it is a reminder of the dire situation there.

The 11,002 documented civilian casualties (3,545 deaths and 7,457 injured) might be a record high for Afghanistan since 2009 (when the UN started its documentation), but the total is dwarfed by the 20,000 killed in the Syrian war. Then again, there is little bombing in Afghanistan, where air operations account for only 3 percent of all dead and wounded, meaning that nearly all civilian casualties are caused by up-close-and personal brute force.

Similarly, even if there is currently no Afghan mass exodus as there is from Syria, Afghans still rank second-highest among asylum seekers and refugees in the world, and the war is in its fourth decade.

Ignoring wars does not make them go away. Nor does simply drawing down international military forces. This is what NATO did in Afghanistan at the end of 2014, when the UN -mandated International Security Assistance Force (ISAF) closed its doors, and with that most international military forces left. Not all foreign soldiers left. Australia and the United States are still contributing nations as NATO launched its Resolute Support Mission (RSM), which focuses on providing “training, advice and assistance activities at the security ministries and national institutional levels and the higher levels of army and police command across the country.” Planned initially for a year, it was quietly extended after the Taliban insurgency managed to briefly conquer the Northern city of Kunduz late last year.

But lets return to the UN report. What does it tells us and, more importantly, what does it not?

Things in the UN Report That Should not Surprise Us

First, wars kill, and as a war intensifies (as it did in Afghanistan), the toll on civilians increases, especially when the rules of war mean little to the fighting parties. Though Afghan President Ashraf Ghani was quick to point a finger at the Taliban for violating international law, arguing that his security forces “underwent regular training to ensure the protection of civilians and were liable to investigate if any breaches occurred,” the UN report shows there are violations on both sides, even if the Taliban might be the biggest perpetrator.

What happened in the northern city of Kunduz was a stark reminder that at least some within the Afghan security forces and government do not mind collateral damage if it means defeating the Taliban.

Second, as it has numerous times before, the Taliban slammed the UN report as biased propaganda by foreign invaders and an Afghan puppet government. Of course the Taliban's rather narrow definition of “civilians” makes it easy for them to claim the moral high ground on not killing the innocent. For the Taliban, anybody associated with or working for the Afghan Government in any form or fashion is a legitimate target, whether they carry weapons or not. Increasingly, however, the Afghan population no longer buys this convenient excuse and views the Taliban as what it is: a brutal insurgent force.

Third, ISAF/NATO clearly did not complete its mission, defined as creating “the conditions whereby the Afghan government would be able to exercise its authority throughout the country, including the development of professional and capable Afghan security forces.” The UNAMA report—and of course what happened in Kunduz—shows clearly that the ANSF is outgunned and unable to halt an ever-expanding and ever-fragmenting insurgency. So perhaps withdrawal was premature and the international military should have heeded the lessons of Iraq.

Fourth, the departure of foreign military forces did not appease the Taliban (which had made this one of its conditions), but gave it greater ability to fight ANSF in ground engagements, which have accounted for 37 percent of all civilian casualties.

In the past, improvised explosive devises were the highest killer of civilians. Without international air power backing up ANSF, the Taliban is free to move in bigger groups, engage into close combat, and terrorize urban centers such as Kunduz and Kabul. Kate Clark from the Afghanistan Analysts Network points out the obvious: the war has flipped. It is now “the Taliban driving the conflict, with the ANSF largely trying to defend territory.”

The increasing intensity of ground combat, combined with a further 38 percent civilian casualties attributed to IEDs and suicide attacks, also explains why the toll has been so high on women and children.

All these “tactics” are more or less indiscriminate. And this is what we need to be afraid of with the Taliban pressing into cities, as it is urban centers where rural populations flee to in order to escape the Taliban. If there is no assistance or protection in cities, Afghans will seek security in neighboring countries or abroad. If Europe is opening doors to Syrians, why not to Afghans?

Things the Report Leaves Out

Here is what the report implies but does not clearly spell out. Although the increase in civilian casualties was largely attributed to intensified fighting in Afghanistan's north and center, numbers elsewhere are down, especially in the south. That said, southern Afghanistan still witnessed the single largest number of civilian casualties.

A drop in civilian casualties does not necessarily mean that all is well, as it could also imply that people are fleeing from violence, leaving fewer people behind to be killed. Research conducted by an Afghan NGO for a report I am currently writing shows that the populations which remain in Afghanistan's south, east and southeast are begrudgingly acquiescing to Taliban forces and simply trying to stay alive. None feel protected by Afghan security forces.

Another thing the UN report does not tell us is that death and injury is not the only impact of the Afghan war. The number of people displaced internally in Afghanistan is close to one million (though this is the tip of a gigantic iceberg, with rural to urban migration largely uncounted). Access to health care is also suffering, with the erroneous targeting of the MSF hospital in Kunduz taking out a major medical facility in a war zone. Swathes of the country are affected by conflict and thus have become inaccessible or hard to reach by development and relief agencies, a situation expected to only get worse in 2016.

In its 2016 Humanitarian Response Plan, the UN Office for the Coordination of Humanitarian Affairs (UN OCHA) highlights the immense vulnerability of the Afghan population, with 70 percent affected by poverty and one-third considered in need of assistance. In 2016, OCHA expects that “approximately one million children will need treatment for acute malnutrition.” The Afghan economy has been on a downward spiral since foreign troops left town. They were huge spenders and employers, and aid went where the foreign troops were.

All in all, the situation in Afghanistan is not well, and perhaps what Iraq tells us is that things could get worse. There are too many similarities to count, but they include: a highly corrupt government that lacks capacity and legitimacy; a peace process that is going nowhere; a frustrated and disenfranchised population; a rise in irregular militias; and an increasingly fragmented insurgency with new splinter groups starting to pledge allegiance to ISIS. Perhaps the UN report is the wake-up call needed to spur action before the situation spins further out of control.

Susanne Schmeidl is a lecturer at the University of New South Wales as well as advisor to The Liaison Office (TLO), an Afghan organization she helped co-found in 2003. She is also a visiting fellow at the Asia-Pacific College of Diplomacy at The Australian National University and non-resident research associate at the Centre for Peace and Conflict Studies of the University of Otago, New Zealand. She has worked on Afghanistan since 2000 and managed the swisspeace office in Kabul between 2002 and 2005 supporting civil society development and civilian peacebuilding mainly through the Afghan Civil Society Forum, which she also co-founded. This article first appeared in the Interpreter.