Against An Air Force Space Corps: Space Belongs to the Navy! 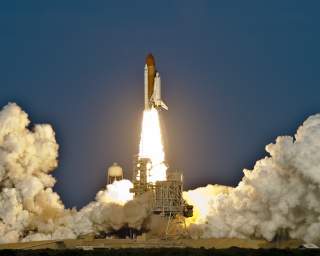 The Air Force is fighting legislation directing it to create a “Space Corps” to better specialize and prepare for conflicts in space. They are absolutely correct in doing so, since the Air Force lacks the particular mentality and expertise necessary for what are clearly naval operations.

The orbital equivalent of afloat forward staging bases will shuttle supplies and rotational crews to vessels that remain in theater, years after launch. In achieving orbit and stationing, maritime professionals will recognize the similarities to anchorage and underway replenishments. To those who point to the challenges of maneuvering a vessel in three dimensions – the Navy already has submariners and naval aviators.

Even if the majority these operations remain automated – manned support craft and control stations will be necessary. Terrestrial, orbital, or onboard watch standers will seek adversary threats and navigation hazards in the vast domain of our congested orbit, to the moon, and eventually mars. The controlling teams will need to combine the naval mentalities associated with surface, subsurface, mine, and air warfare.

Unfortunately, past decisions are keeping the Navy from its logical front position for leading a Space Corps. The Navy was convinced to abandon Naval Space Command (NSC), which controlled USN space surveillance assets, advocated for naval warfighting requirements in the joint arena, and advised the naval service in the production of space plans and training until 2002. Through the NSC’s decommissioning, the Air Force received custody of  the US Navy Space Surveillance System (SPASUR), AKA “The Fence.” With SPASUR’s chain of stations curving through the southwest, the Navy could detect objects as small as a basketball in earth’s orbit.

However, the Navy’s mission and capabilities have led it back into orbit. While the Air Force civil war rages over allowing non-fighter-pilot communities to animate the service, the Navy willingly pursues warfighting leadership in areas it may not initially consider mainstream. The Navy has been comparatively bold in its development and integration of remote and automated platforms - tactically and institutionally. This instinct will be critical in space. Also, each of the Navy’s Arleigh Burke DDG’s AEGIS system is either capable or upgradable to detect and engage ballistic missiles in space. With AEGIS ashore, the Navy is arming the shore-based space monitoring stations of the past for BMD – modern coastal defense facilities. In culture and capability, the Navy is integrating space-based missions and space-compatible concepts into the line.

The sailors who crew these ships and shore stations, our pilots and aircrew, and our submariners provide fertile soil for a Space Corps. You’d be hard pressed to enter any AEGIS Combat Information Center, Virginia Class SSN bridge, or the integrated fighting bridge of an Independence Class LCS without imagining the space-faring bridges of science fiction and forecast. And for good reason, because it’s the type of space faring command center you WOULD build in the future. Popular culture recognizes the Navy’s pre-eminence beyond the atmosphere. From Star Trek to Battlestar Galactica to HALO to Warhammer 40k, naval personnel stand watch amongst the stars by which they navigate. Hell, even the Space Marines are always right there with us. ‘Rah.

So, Congressman Mike Rogers (R-Al) is right – as our commercial opportunities drive us further into space and our adversaries’ advancements drive them to the same, space must shift from military periphery. However, we’re asking the wrong service to do it. The Air Force’s current dominance in space is from short-term institutional convenience and an outdated altitude-based perspective. Our Navy, not Air Force, has the crew mentality, operational perspective, and leadership culture compatible with our long-term space needs. Remember, they are called space “ships” for a reason!

Matthew Hipple is a naval officer and former president of the Center for International Maritime Security. His opinions are his own, and do not represent the US Government, Department of Defense, or Department of the Navy.

[1] Hat-tip to the US Coast Guard. Space is going to need law-enforcement boarding teams and buoy tenders too!