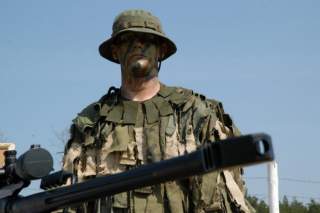 While we don’t have all the details just yet, the Joint Concept for Access and Maneuver in the Global Commons (JAM-GC), the successor to the hotly debated Air-Sea Battle (ASB) concept, will not be an ‘all-Asia’ affair. The growing challenge to U.S. and allied forces known as Anti-Access/Area-Denial (A2/AD) is spreading—thanks to Russia and Iran with Syria and even North Korea presenting A2/AD predicaments. As the Pentagon has alluded to, this new concept will be suitable for wherever A2/AD problems present themselves. This will include the Asia-Pacific, the Baltic and Black Seas, Eastern Europe, the Eastern Mediterranean and beyond.  The Pentagon should not discount the value of such a reworked geographically and domain neutral ASB, especially to nations in Central and Eastern Europe who fear NATO forces might face serious problems in the event of a crisis with Russia—utilizing advanced A2/AD tactics and weapons platforms.

Air-Sea Battle: Born With An Emphasis on China:

Starting in the early to mid 2000s, Pentagon planners began to look beyond the carnage of Iraq and COIN focused operations to the threats of the future. Strategic planners saw trouble ahead if conflict were ever to develop with China in areas around the Taiwan Strait as well as in the East and South China Seas. Beijing was developing an array of various missile platforms—both ballistic and cruise—which placed U.S. aircraft carrier battle groups in harms way. Combined with growing capabilities in the areas of advanced submarines, naval mines, cyber warfare and air defense platforms, China was quickly developing a capability to deter, delay or deny any large outside power the capability to contest Beijing’s wishes in its adjoining near seas—and now all the way to the so-called first-island chain and possibly beyond. Dubbed Anti-Access/Area-Denial or A2/AD (called counter-intervention operations by China) U.S. and allied forces would be forced to make a critical choice in a crisis: enter into areas along China’s coasts and pay a punishing price in men and material or effectively secede control of any areas in Asia where Chinese A2/AD forces operate.

Realizing the danger presented by A2/AD, the Pentagon worked to create an operational concept that would allow U.S. and allied forces to retain their advantages on the battlefield and defeat any A2/AD challenge. While the rollout out was certainly clumsy—from a think-tank crafted document sketching out what ASB could look like in a war with China (and attacking the Chinese mainland) to the Pentagon embracing the name Air-Sea Battle (note: the dash is the difference between the think-tank inspired ASB and Pentagon ASB) and clearly gyrating around which nation or nations are the greatest threat—ASB was certainly on its way to largely dominating Pentagon thinking for years to come.

As ASB Becomes JAM-GC, The Domain and Geographic Scope of the Concept Must Change:

By the fall of last year, anyone who was watching the debate over ASB noticed that signs were pointing to changes in the concept. A2/AD challenges were proliferating around the world and becoming more advanced by the day. The Pentagon couldn’t embrace an ASB concept that was slowly becoming dated but also needed to tackle A2/AD challenges on land and in other theaters besides Asia—thanks at least in part to Russia’s slow but steady embrace of various types of A2/AD platforms and strategies.

While we know of the name change to JAM-GC, we know little specific details to date. However, the concept should provide both credible (deterrence) and effective (real fighting) U.S. capabilities in a variety of situations beyond the air and sea domains and not just in Asia. Such capabilities constitute the backbone of the current system of alliances and security architecture underpinned by the United States as a leading global power.

The new concept, which by all indications from open-source materials is in the final process of preparation, will likely include enhanced allied participation as well as an emphasis on ensuring control of the battlefield across all domains of possible conflict (land, air, sea, cyber and space).

Four Recommendations from U.S. Allies in Central and Eastern Europe:

From a Central and Eastern European perspective, especially when one considers looking at potential A2/AD challenges from Russia, four possible recommendations for the new concept should be considered. These include:

- The strengthening of power projection capabilities—especially in the cyber realm where costs can be managed efficiently—while working to defend against A2/AD weapons platforms across as many domains as possible.

-Promote the creation of independent command, communication and control systems that will be less open to A2/AD attacks—with cyber defenses being of critical importance.

-The bolstering of fighting capabilities and defensive measures that would challenge Russia’s potential incursion or coercive actions along and across contested or potentially contested conflict zones—and across all domains of possible conflict.

- U.S./NATO allies should be encouraged to develop their own A2/AD capabilities—what is good for Russia and China can be used against them. Special attention should be focused towards driving up the cost of Russian intervention in any and all contested domains that U.S. and/or NATO forces would have a possible chance of intervening in.

Towards a JAM-GC that Works for All—Especially Central and Eastern Europe:

The above points are of tremendous importance for all regional allies, but in particular for the landlocked countries of Eastern and Central Europe that have not yet fully been brought up to speed on the finer points of JAM-GC/ASB or adjusted their operational approaches to the A2/AD challenges of the future.

For Eastern European allies, and most importantly Poland, such important partners must play a role in shaping the concept as it is molded to address A2/AD challenges coming from Russia. This new concept should use allies expertise to procure and field capabilities in line or concurrent with the way the U.S. wants to project power toward the remote edges of its traditionally perceived strategic power projection range - e.g. the Baltic States or Poland. In the wake of such participation some additional considerations could be added to Poland’s own operational concepts, military planning, basing and future procurement as envisaged by the current ambitious military modernization program.

While conflict with Russia seems remote, allied forces need to be ready for the challenges of the future—challenges that clearly will have an A2/AD focus. JAM-GC in its final form and as it evolves must take Central and Eastern European concerns into account. While early indications point to a multi-domain operational concept that is geographically neutral, Central and Eastern European nations must have their important perspectives considered—now and in the future.

Jacek Bartosiak is a Senior Fellow at the Potomac Foundation. Prior to joining the Potomac team in 2015, he served as Council at the National Centre for Strategic Studies (NCSS) in Warsaw, Poland, which he founded in 2013.