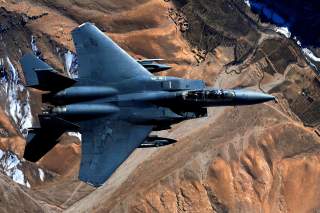 Tom Cruise stirred excitement last week when he teased that production of the sequel to the iconic 1986 film Top Gun had commenced. In doing so, he not only unintentionally kicked off a friendly interservice feud, but may have also spurred a debate regarding which of America’s two fighter aircraft mainstays is superior.

In response to the promotional picture, which featured “Maverick” looking at an F/A-18E/F Super Hornet with the phrase “Feel the Need” superimposed on it, the Air Force responded via Twitter, “If Maverick really had a need for speed, he’d hop into one of our F-15E Strike Eagles! #DYK: They have a top speed for 1,875 miles per hour.” The amusing exchange went back and forth for several tweets, with even the Air Force Space Command leaping into the fray, highlighting the six thousand miles-per-hour velocity of its space-launch vehicles.

It does beg the question, though—notwithstanding “Maverick” is a Naval Aviator and could not fly the F-15E even if he wanted to, which fighter should he fly; the Strike Eagle or the Super Hornet?

It is worth noting both the F-15E and F/A-18E/F are produced by Boeing. Going further back in time, both fighters are products of McDonnell Douglas, which merged with Boeing in 1997. The two fighters may be different, but neither the Air Force nor Navy can claim that their Sunday punchers are the product of a superior manufacturer.

It is also worth noting that the Air Force embellished its claim of the Strike Eagles superiority by pointing to its unbeaten record in combat, having downed over one hundred enemy fighters while losing none of its own. But the majority of those one hundred kills belong to the Israeli Air Force and belong to the older F-15A/C air superiority variant and export variants. The F-15E does have a few kills to its name, but a number of them have been lost in combat as well.

Most importantly, the Strike Eagle, as its name implies, is a multirole strike fighter. To optimize this capability, it carries a crew of two—a pilot and Weapons System Officer. Though it possesses excellent air-to-air capability, its reason for being has always been long-range ground attack. The air supremacy mission is better off in the hands of dedicated fighters and interceptors like the legacy F-15 and the fifth-generation Lockheed Martin F-22A Raptor.

By comparison, the F/A-18 can claim only three kills and the Super Hornet only one of those three. The Super Hornet’s lone kill came last year over Syria, nearly fifteen years after entering operational service. Like the Air Force fighter, the F/A-18E/F is a multirole strike fighter, but greater emphasis is placed on the air superiority mission. This role became more critical after the retirement of Maverick’s first ride, the Grumman F-14 Tomcat, in 2006. Like both the Tomcat and Strike Eagle, the F-variant carries a crew of two, while the E-variant carries one. In addition, the “Super Bug,” as the plane is both affectionately and derisively called, conducts precision-strike, suppression of enemy air defenses (SEAD), reconnaissance, and even aerial refueling tanker missions. When it comes to versatility, the Navy can certainly claim to have the superior platform.

But, as the saying goes, a jack-of-all-trades is not exactly a master of any trade. In fact, the numbers do show the Air Force may possess the superior platform in the Strike Eagle. The latest version is powered by two Pratt & Whitney F100-PW-229 turbofans producing over twenty-nine thousand pounds of thrust with afterburner. By comparison, the Super Hornet is powered by two General Electric F414-GE-400 turbofans producing twenty-two thousand pounds twenty-two thousand pounds of thrust with afterburner. According to Boeing, the Air Force is correct in saying the Strike Eagle’s top speed is 1,875 mph, while the Super Hornet flies up to 1,190 mph. When it comes to speed, the F-15E is far superior.

The most glaring difference is range. Though both aircraft utilize in-flight refueling, the F-15E has a combat radius of up to over one thousand miles, depending on its fuel and weapons load. The F/A-18E/F, again, depending on its war load, has less than half that. While the Navy fighter can pull off long-range or long-flight time missions, the Air Force’s vanguard can do it with much greater ease. The Navy is taking a page out of its sister service’s playbook, however; the F/A-18E/F will adopt the Conformal Fuel Tank (CFT), considerably extending its unrefueled range. The F-15E was the first fighter to utilize CFTs when it entered service in 1989. They permit the fighters to carry more fuel without relying on conventional drop-tanks that increase radar signatures and increase drag.

The Strike Eagle also carries more weaponry than the Super Hornet. The F-15E carries up to twenty-three thousand pounds. of external fuel and ordnance, compared to the 17,750 pounds of the F/A-18E/F. Both carry the same kind of ordnance, with a few exceptions. The Super Hornet can fire AGM-88 High-Speed Anti-Radiation Missiles (HARMs), but the Strike Eagle cannot, making the Air Force fighter the last resort for SEAD. In turn, the F/A-18E/F does not employ the GBU-28 bunker-buster bomb, while the F-15E does, which makes the latter a weapon of choice when a mission requires striking hardened or deeply-buried targets.

Despite offering different capabilities, both the Air Force and Navy have reasons for not only initially acquiring the Strike Eagle and Super Hornet, but for keeping them around as well. In nearly every American conflict since the 1991 Gulf War, the F-15E has proven to be an indispensable deep striker against targets of strategic importance and even an effective close air support fighter in recent conflicts. From enforcing no-fly zones over Iraq and the Balkans, to the wars in Afghanistan, Iraq, Libya, and Syria, Strike Eagles showed themselves to be deadly-effective at destroying just about everything. Its combination of payload, speed, and range is rivaled only by America’s heavy bombers, which are also more vulnerable and less flexible platforms.

For the Navy, the versatility of the Super Hornet, coupled with its cost-effectiveness, results in an aircraft that offers the widest range of competencies and still take off and land on an aircraft carrier. This last requirement is crucial, as it places limits on aircraft capabilities and design. In other words, the Strike Eagle may possess superior speed and range, but the F/A-18E/F can be placed closer to its target by virtue of flying off of a floating airbase at sea. This also means there are operational situations where the Super Hornet can be easily deployed, but the Strike Eagle cannot. In fact, in the event of a crisis, the F/A-18E/F is likely to be a first responder and on scene long before an F-15E shows up. Having been in service about half as long as it’s Air Force counterpart, the Super Hornet has proven itself to be very reliable during the War on Terror and has been at the forefront in the campaign to eradicate the Islamic State in Syria and Iraq.

Throughout their service lives, both fighters have been continuously upgraded and are even better than before. The F/A-18E/F utilizes an AN/APG-79 active electronically-scanned array (AESA) radar, replacing the AN/APG-73 radar it was introduced into the fleet with. The F-15E uses the AN/APG-82(V)1 (also AESA) which, ironically, combines the processor of the APG-79 with the antenna of the APG-63, the radar deployed on legacy F-15s. Precision strike is conducted on the Super Hornet with the Terminator II ATFLIR, which replaced the earlier Nite Hawk pod and offers higher-resolution targeting imagery from altitudes up to forty thousand feet. The Strike Eagle can choose from three pods—the LANTIRN, the Sniper XR, or the LITENING. The F-15E can also carry a Dragon’s Eye pod, which is a synthetic aperture radar used for geo-location, reconnaissance, and surveillance. The information gleaned from Dragon’s Eye is used to create detailed maps for intelligence purposes. The Super Hornet, meanwhile, carries the SHARP pod for reconnaissance missions, replacing the capability lost with the retirement of the F-14 and its TARPS pod.

Finally, both Strike Eagle and Super Hornet crews utilize the Joint Helmet-Mounted Cueing System (JHMCS), which allows users to direct sensors and weapons in the direction being viewed. But perhaps the best is yet to come, at least for the F/A-18E/F; the Block III variant will add a variety of state-of-the-art capabilities, including an infrared search and track (IRST) sensor. IRST can detect what radar cannot, namely stealth fighters, making the Block III Super Hornet one of the deadliest non-stealth fighters in the world. On the other side, the F-15E will remain in service for the foreseeable future, even as the F-15C air superiority fighter will retire within the next several years.