Al-Shabaab Threatens U.S. Attacks: Should You Be Worried? 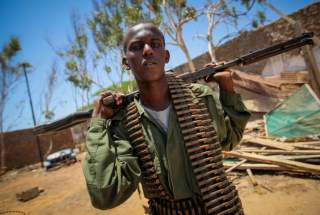 Al-Shabaab, the al Qaeda-linked militant group in Somalia, has sympathizers in the United States, but likely does not have the ability to strike targets in the West, despite its recent threat to do so, according to Atlantic Council analyst J. Peter Pham.

“Shabaab has always had a transnational reach, but it has never struck transnationally beyond the region,” Pham, Director of the Atlantic Council’s Africa Center, said in an interview.

“There has also been no evidence of an active sleeper cell, but there has been more than sufficient evidence of sympathizers,” he added.

A small number of Western citizens, including Americans, joined the ranks of al-Shabaab. Shirwa Ahmed, the United States’ first suicide bomber in the modern era, came from the Somali-American community in Minnesota.

Shabaab’s leadership is betting on inciting anyone among a small minority of Shabaab sympathizers in the United States to carry out a terrorist attack, said Pham.

“It would be a feather in their cap coming at a time when militarily they are weak and really the third tier among terrorist groups in Africa behind Boko Haram and the Islamic State in Libya,” he said.

In a video posted online on February 21, al-Shabaab called for attacks on shopping malls in Canada, Britain, and the United States. The video lists the Mall of America in Bloomington, Minnesota, as a target. Minnesota is home to the United States’ largest Somali community.

Homeland Security Secretary Jeh Johnson called on visitors to the Minnesota mall to be “particularly careful.”

Al-Shabaab is trying to “inspire a copy cat event” similar to the attack in Nairobi, and they’re “trying to wreak economic havoc” in the United States by threatening to strike malls, Atlantic Council Chairman Jon M. Huntsman, Jr. said on MSNBC.

Al-Shabaab has rarely carried out major attacks outside Somalia, but in September of 2013 it attacked the Westgate Mall in Nairobi, Kenya, killing more than 60 people and injuring hundreds.

The United States is well prepared to foil such an attack, said Huntsman.

“I don’t think the nation has ever been better prepared… for these kinds of scenarios. We’re a whole lot better than we were before 9/11,” he added.

The State Department designated al-Shabaab a foreign terrorist organization in 2008.

Al-Shabaab has suffered significant setbacks in Somalia in 2011 and 2012, including losing control of the strategic port city of Kismayo.

Al-Shabaab is “a good example of being a victim of your own success,” said Pham, referring to the setbacks the group has suffered following natural disasters in areas that were under its control and under pressure from African Union and U.S. military operations.

Pham spoke in an interview with New Atlanticist’s Ashish Kumar Sen. Excerpts below:

Q: Is al-Shabaab transforming from a regional threat to a transnational one?

Pham: Al-Shabaab has changed dramatically in the last several years and is increasingly primarily a terrorist group and less of an insurgency, which it was for a good number of years.

It is a good example of being a victim of your own success. A combination of the famine and drought, Shabaab’s mishandling of those calamities, its overreach in trying to impose an alien ideology on the Somali people, the efforts of the better trained and equipped African Union Mission in Somalia (AMISOM), the marginally increased capacity of the Somali central government, and interventions by Somalia’s neighbors has contributed to the Shabaab being severely degraded as a military force. It has lost a lot of the territory it once held; its conventional forces have either surrendered or defected; and US special operations strikes in Somalia have decimated the senior leadership, including al Shabaab’s extremist emir Ahmed Godane who was killed last September.

The result of this degradation is that Shabaab’s nationalist factions have largely melted away, but the hardcore jihadist element has remained and now represents the preponderant force. This minority within Shabaab has asserted itself in ongoing terrorist attacks in Somalia and low-intensity attacks in parts of Kenya, especially the northeastern areas.

Shabaab has always had a transnational reach, but it has never struck transnationally beyond the region. There have been US citizens, Canadians, Europeans who have joined Shabaab as fighters, including America’s first suicide bomber who came from the Somali community in the Twin Cities. There have been Americans who have been charged by the US government with material support for Shabaab.

So there has always been a small niche — a minority within the Somali American community — that has responded to Shabaab. They have primarily responded to the fight in Somalia, but Shabaab’s current leadership is betting that somewhere within this minority there might be a person that they could incite to violence. If they succeed in that it certainly would be a major feather in their cap.

It would be a feather in their cap coming at a time when militarily they are weak and really the third tier among terrorist groups in Africa behind Boko Haram and the Islamic State in Libya.

Q: Does al-Shabaab have the ability to attack targets in the U.S.?

Pham: There does not seem to be any evidence of direct command and control. The video seems to be more of incitement and giving specific suggestions. It doesn’t seem to be an order to an existing group, but inciting someone who is sympathetic to do so.

There has also been no evidence of an active sleeper cell, but there has been more than sufficient evidence of sympathizers. There is a niche they are appealing to. While only a few, it only takes, in a situation like this, one of them to act.

Q: What success has al-Shabaab had in recruiting among the Somali-American community?

Pham: It is only a very small minority that has been sympathetic and an even smaller group that has actually done anything. We are talking about several dozen young men who have gone over as fighters.

We’re dealing with a network of active sympathizers in maybe the low hundreds. We’re not dealing with a great number of people. As within any large minority group there will be some people who will be disaffected and they are the problems.

The key to rooting those out is having good relations with the community as a whole so it can become the first line of defense.

Q: Al Qaeda in the Arabian Peninsula (AQAP) was behind the recent terrorist attacks in Paris. What sort of relationship exists between AQAP and al-Shabaab?

Pham: Shabaab and AQAP have had a long-standing history of helping each other when they were down and out. After the Ethiopian intervention in Somalia in 2006 when Shabaab was on its heels it was the al Qaeda-linked militants in Yemen that later became AQAP that provided a lifeline to Shabaab in terms of training and weapons.

Later when Shabaab acquired territorial dominion in Somalia it hosted training camps for militants who later filled the ranks of AQAP.

In 2012, AQAP facilitated Shabaab’s declaration of allegiance to al Qaeda and Ayman al-Zawahiri.

AQAP and Shabaab have had links, there is coordination and, if you will, good neighborliness between terrorists. But I don’t think there is any AQAP command and control in Shabaab’s recent declaration.