All the Terrifying Ways ISIS Is Dangerous (Hint: Others Will Use Their Tactics) 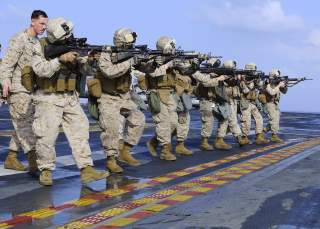 U.S. and allied forces operating in the Middle East and around the globe are increasingly facing off against advanced systems such as drones, airborne improvised explosive devices (IEDs) and other weapons that are being built by insurgent and terrorist groups. But the Pentagon does not yet have a cost effective way to counter such systems. Almost inevitably, the cost-exchange ratio favors the enemy.

Iraqi forces—and their American advisors—have faced off against a range of such systems in the fight to retake the city of Mosul from ISIS, for example.

“When I came here eight months ago, they had capability that was very large. They had suicide-borne vehicle — vehicle IEDs. They had UAS [unmanned aerial system] platforms. They had a suite of indirect-fire platforms. And they had lots of fighters,” Maj. Gen. Joe Martin, commander of the Combined Joint Forces Land Component Command, which includes all the coalition ground forces in Iraq, and the 1st Infantry Division out of Fort Riley, Kansas, told reporters at the Pentagon on June 14.

“But over time, we stripped away their capabilities of those networks.  And so, they've gotten smaller and smaller in size and capability.”

The U.S. Army and the Iraqi forces specifically hunted down and destroyed ISIS’ capability to use aerial IEDs as well as drones that can drop munitions because of the threat they posed.

“That particular capability's been absent from West Mosul for quite a while,” Martin said.

“And the reason it's gone is because we've targeted and we stripped them of that capability.  Plus, the Iraqi Security Forces are helping with that.  In addition, the Iraqi Security Forces have learned how to protect themselves from that. And so, all though a possible capability because of how we've adapted to the environment, it's really nothing more than a nuisance now.”

Nonetheless, ISIS has proven to be a brutal and ruthless enemy—stooping to depths that are nearly unheard of in modern warfare.

“They resorted to tactics that we've never seen before. I've been in the military for 31 years. I've never seen an adversary like this,” Martin said,

“And I've never read about an adversary like that, that exploits the population the way that they have. And yet throughout the east side and the west side, the Iraqis have exercised an exceptional amount of restraint, discriminating between civilians and the foes that they face.”

Moreover, in addition to its barbarity, ISIS has proven to be resourceful and creative. Indeed, the terrorist organization has been developing and building its own weapons.

“As we continue to liberate areas, we're finding that ISIS was very creative in trying to create their own weapons—many different weapons of many different types,” Martin said.

“And that's helped inform us as to what we'll see in the future in other places that we go. And of course, we share that with our partners. We share that with the members of the coalition so that we're better informed. I will grant you that they were very creative, but despite that creativity and despite the evil intent of these weapons as they produced them, they haven't been able to prevail.”

But as Martin noted, the weapons, tactics, techniques and procedures that ISIS has developed will almost certainly show up elsewhere the United States will fight. As Lexington Institute analyst Dan Goure wrote for The National Interest, ISIS has leveraged advances in commercial drone technology to its own advantage.

“Not only are the technologies carried by these drones continuing to improve dramatically, with cameras getting smaller while providing better images, but so are innovations to exploit these pictures,” Goure wrote.

“From the comfort of underground command centers, ISIS commanders are able to watch the movement of Iraqi and Kurdish forces in real time. For the first time in history, terrorist groups can operate their own air forces.”

Moreover, ISIS—and other terrorist group in the future—could use such technologies to deliver weapons of mass destruction such as chemical or biological agents.

But countering these cheap commercial drones is problematic. Right now, the military has to rely on expensive weapons such as Raytheon’s Stinger—which costs roughly $40,000 per shot—to defeat drones that might cost as little as $200. The cost-exchange ratio is ridiculously lopsided. However, industry is working on ways to counter such systems at cost that is proportional to the threat.

“The response by industry and government laboratories to this urgent requirement for means of detecting and defeating hostile drones has been nothing short of remarkable,” Goure wrote.

“The UAS threat arose rapidly. Fortunately, the means to counter this new threat are moving ahead almost as fast.”

The key will to be to get the cost-exchange ratio down to a reasonable level. There is little sense in expending a $1.4 million missile against $200 drone.