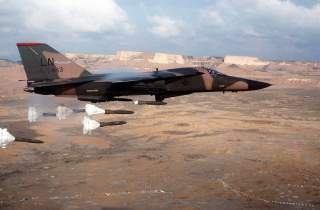 In discussions about the future of ANZUS last week, I introduced a discussion of Australia–US cooperation in air combat and strike. Because of recent force structuring decisions, I think Australia’s well set up to make substantial contributions to coalition air-power operations in the future, but it’s worth thinking through how we might best do that.

History provides some valuable lessons. Australia’s first air operations with the United States were during World War II’s Pacific campaign. Australia started the war with equipment that wasn’t up to speed, and relied heavily on imports from the U.S. and UK. Both of those nations had their own priorities and it took the RAAF some time to catch up.

As a result, the Australian contribution to the allied air campaign wasn’t always especially helpful. As aviation historian Michael Claringbould observes, turning up for coalition operations and bringing along outmoded equipment can be counterproductive:

The formation of 10 Operational Group in late 1943 hindered the [US] 5th Air Force… [T]he limited contribution the RAAF would make at Nadzab [PNG] was at the expense of valuable apron space, badly needed by advanced US types. The fact that No. 10 showed up with obsolete or superfluous types frustrated the Americans, [who] were forced to allow the RAAF to operate from Nadzab for reasons of political compromise, rather than contribution to the war effort.

So it’s possible for an ally—especially the junior one—to be a nuisance rather than an asset if its forces aren’t what the local commander needs. Balanced against that is the political payoff in having allied support, and it can be a net positive if mere presence is sufficiently valuable. That wasn’t the case in WWII because it was a war of survival, but in operations of a more discretionary nature the calculus can be different. Many of the smaller contributions to coalition operations in Iraq and Afghanistan can be filed under "little or no operational benefit but politically valuable."

Of course, it’s better to make a valuable contribution to the politics and the operation, as Australia managed to do in subsequent wars. By 1945 the RAAF was the world’s fourth largest air force (admittedly after some of the former high-rung position holders were displaced with extreme prejudice), with an inventory of capable aircraft and experienced personnel. The Navy was assembling a capable air arm, and the RAAF and RAN were significant front-line contributors over Korea. The RAAF later took its Canberra strike bombers to Vietnam and worked successfully with American tactical air units, flying over 11,000 missions.

But those successful exercises in alliance air power haven’t been repeated. Australian defense spending fell dramatically after announcement of the Guam doctrine and the end of the Vietnam War, and by the 1990s, Australia’s defense forces were suffering from a scarcity of resources and the inevitable "hollowing out" of capabilities. The ADF played no direct combat role in the 1991 Gulf War and when an American request for Australian F-111s was made for Operation Desert Fox in 1998, the aircraft weren’t fit for purpose, lacking critical electronic warfare equipment. Similarly, the Australian contribution to the air campaign in the 2003 Iraq War came only after Iraq’s air defense system had been effectively eliminated by U.S. forces.

Together, those examples show that Australia has been a valuable contributor to air operations when it had capable and well-maintained equipment which allowed the RAAF to operate effectively alongside American forces. At other times we’ve been an ineffective but tolerated flag flyer (and in Desert Fox not even that).

Today, after a decade of investment into its air-combat capability and with more to come, the ADF is well-placed to be a real contributor to allied air operations, should the government of the day choose. Super Hornets put it on a par with the U.S. Navy air combat and strike capability, and early next decade the F-35 will move Australia further up the American capability curve.

But tactical strike fighters mightn’t be the most valuable contribution we could make. The US won’t lack those—it will have 600+ Super Hornets and more F-35s by early next decade. Turning up with "more of the same" could be useful, as it was in the widespread wars in Korea and Vietnam, but in a more focused campaign it could complicate American command and control while adding little extra combat capability. To avoid that we could instead contribute capabilities that are almost always oversubscribed in modern air warfare: electronic-warfare support, airborne early warning and control and air-to-air refueling. Again the RAAF is well placed, with small but capable fleets of all those types.

It remains to be seen whether the government will opt for further investment in alliance-specific capabilities. But if it does, the less glamorous but always-valuable air-combat support assets would be a good place to start.

Andrew Davies is senior analyst for defence capability and director of research at ASPI. This article first appeared in ASPI's The Strategist here.