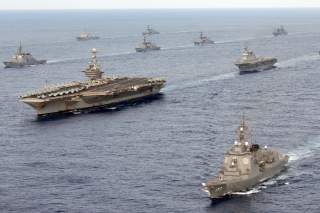 2010 is a year to remember in U.S.-China relations. Since the second decade of the 21st century, the very strategic foundation of the relationship has undergone incremental erosion – five or so years later the cumulative result is serious.  The vocabulary employed to describe approaches to managing bilateral ties has changed, captured by the decreasing use of an “engagement” vocabulary, a passing transit through the concept of light and heavy “hedging,” on to “deterrence,” and now one hears voices using the vocabulary of coercive diplomacy in both societies.

Some in the China studies field have argued against the proposition that China’s regional policy has become more assertive. I am not among them.  There has been a qualitative change in Chinese regional policy and broader strategic alignment, notwithstanding Beijing’s official protestations to the contrary and the fact that China’s current neuralgias are largely those of the past. Unfortunately, the already-hackneyed characterizations of PRC behavior as “salami slicing” or “nibbling” have an element of truth – Beijing is attempting to peel back the maritime status quo ante in the East and South China seas, one thin layer at a time, without making a move dramatic enough to justify a major response by others at any given moment.  All this is not to say Japan and others have not taken ill-advised actions that have provided openings for, and provoked, Beijing, a most recent example being Tokyo’s renaming islands in the East China Sea.

All this gives rise to several questions:

1. Why (or to what extent) has Beijing changed a successful policy that for more than three decades facilitated a dramatic increase in Chinese comprehensive national power without engendering a proportionate rise in the anxieties of others?

3. Why is Beijing jeopardizing the primacy of its internal, economic reform goals by alienating substantial chunks of its periphery and running the risk of an ever-stronger international coalition pushing back?

4. Why is Beijing allowing itself to be driven into a corner of alignment with Russia, an economic underperformer that violates the PRC’s own 60 year-old-principle of respecting national sovereignty?

5. What are the lessons that we learned from the Cold War about strategy, deterrence, and coercive diplomacy that have applicability in current circumstances in a far different globalized world?

6. Has U.S. policy in any way given added push to negative developments?

7. What are the appropriate (and effective) policy responses available to Washington?  What are clearly disastrous paths that Washington and others should eschew?

I cannot address all these questions, serious research is needed on each, and I am not pushing for specific actions, beyond endorsing the spirit behind Assistant Secretary of State Danny Russel’s July 28, 2014, statement calling for “claimant states to define and voluntarily freeze problematic activities” – the tit for tat cycle occurring in maritime Asia needs to be broken. Instead, I wish to make three points as we try to work our way through this precarious period:

- Second, we should not simply frame the issue as, “How should the United States respond to Beijing?”  Rather, the regional and international systems have reacted, and are reacting, and this has already imposed meaningful costs on the PRC.  An important question for Beijing is how long does it wish to bear these, and possibly other, growing costs?

- Finally, as we contemplate how to respond, Washington should not take actions that are to everyone’s detriment, not least the interests of our friends in the region, nor should we fail to consider the lessons of the Cold War in developing responses.

Asia is a region in which levels of trust across national boundaries are low, and memories are long. It is a region full of pluralistic societies and polities, many of which seek to garner domestic support by appealing to nationalistic aspirations – this is as true for Japanese Prime Minister Abe Shinzo as it is for PRC leaders and others in the region.  As a consequence, while it is certainly true that assertive Chinese nationalism is a problem, the larger challenge is the interacting nationalisms driving many polities and societies in Asia to be assertive.  Washington needs to be careful that in opposing the assertive nationalism of China we are not giving free rein to others.

With respect to the second point (China already is paying costs), the PRC’s relations with its periphery have suffered a net decline over the last five years:  Beijing’s “box score” for bilateral relations shows overall losses, with minuses in Myanmar, Vietnam, Indonesia, Philippines, Australia, Malaysia, India, Singapore, and of course Japan, with South Korea being a complex case, but not a plus for Beijing.  China’s relations with ASEAN as a whole would have to be counted as weaker. Anti-Chinese riots in Vietnam and canceled infrastructure projects in Burma are just two indications of how careful Beijing needs to be in its dealings with its neighbors. Relations with Russia could be counted a plus, but I continue to be impressed by the structural weakness of that relationship. Beyond triangular politics, bilateral security, and energy (which Russia needs to sell in any event), what does Moscow have to offer Beijing over the long haul that would offset the serious deterioration with the U.S. and others?  Turning to Hong Kong and Taiwan, many things could be said but, put most simply, it will be tough to give confidence to the populations living in these two areas if Beijing’s relations sour with the West and much of the region to which they are so intimately connected.

If one sets this net loss against a very heavy and challenging domestic agenda in China, where President Xi Jinping is seeking to move forward on the Third Plenum’s broad economic and social agenda, attack powerful networks of corruption, bring added coordination to a very fractious domestic policy system, and move onto yet another area of change in the upcoming Fourth Plenum in October, it is hard to see how the PRC’s external circumstances mesh with the need for internal focus. Foreign economic ties and foreign policy can, for awhile, proceed on somewhat separate trajectories, but eventually security problems will infect economic relationships.

Addressing the third set of issues (appropriate and effective responses), there are no easy answers.  Also, we need to remember that there are big upsides to cooperation with China that never existed with the Soviet Union, and these are not limited to the economic domain.  Nonetheless, two things are clear: first, we ought to remember some central lessons of the Cold War. And second, we should not add to instability and/or hurt our friends more than positively affecting Beijing’s behavior.

Among the central lessons of the Cold War that Glenn Snyder in part catalogued thirty years ago are:

- Increasing commitment to allies has the possible upsides of reassuring friends, enhancing one’s reputation for loyalty, deterring an adversary, and increasing credibility – if one has the material resources and domestic political will to deliver and the threat is sufficiently potent to offset any possible conception of gains.  The possible downsides are being ensnared by friends into commitments not in your interest, provoking an adversary, underestimating the burdens an adversary will bear, solidifying the adversary’s internal coalition against you, propelling a security dilemma of ever-greater proportions, and of course the problems associated with communicating accurately, in a timely fashion, and with credibility, across cultures.

- A challenger’s perception of your capability is important.  Capability includes: the willingness of one’s population to sustain a commitment; the material resources available to sustain that commitment (which includes the political ability to tax oneself to achieve that capability); and, the other domestic and global demands drawing on one’s resources – how stretched does one appear to be?

Also, one should not seek to turn existing zones of relative calm and stability into additional problems for Beijing, in the misguided notion that whatever multiplies Beijing’s problems must be in our interests. This we could call the strategy of asymmetric destabilization.  To seek to fish in the troubled waters of the “Occupy Central” movement in Hong Kong, or the “Sunflower Movement” in Taiwan, would provoke the worst possible response from Beijing and is not something that those movements would or should want, making them seem to be agents of outsiders rather than the home-grown movements they are.

To summarize, if Beijing wants to improve relations with Washington, the easiest, quickest, and most mutually beneficial path is to improve relations with its own periphery.  For its part, a portion of the U.S. management approach needs to be constructively shaping the behavior of U.S. allies and friends and recognizing that Asia’s problem is not simply China, but rather the conflicting nationalisms and insecurities of many countries in the region.  Managing U.S. rhetoric, matching resources to objectives, improving our own governance and comprehensive national power, and minimizing the siren song of martial and values discourse in what has become the perpetual U.S. political campaign are not the least of the challenges facing the United States.  In the end, however, Washington needs to find ways to address the nibbling strategy of Beijing without sliding into escalation, doing great damage to the regional (and global) economy, or taking on more than the US people are willing to bear.  An open-ended, deteriorating security and economic environment is a tragedy for the US and the region, and a catastrophe for China. One is hard-pressed to avoid concluding that both China and the US need this deteriorating circumstance like a hole in the head.  That may be the most compelling strategic argument of all to change course.