America Could Win a War against Russia and China (but at What Cost?) 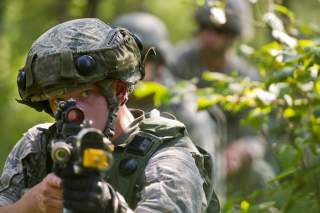 “If we get into one of those conflicts, we’ll win, but it going to take a lot longer than we’d like and it’s going to cost a lot more in terms of dollars and in casualties.”

The United States military is not ready to confront a peer-level threat such as Russia or China in a high-end conflict. As it currently stands, while the United States would ultimately prevail in a hypothetical high-end war, Washington would pay a high price in blood and treasure. That’s what the nation’s top uniformed officers told the Senate Armed Services Committee on Sept. 15.

Gen. Mark Milley, United States Army chief of staff, reiterated his belief that his service does not have the resources and training to execute America’s national security strategy without ‘high military risk.’ Risk in Milley’s context is the ability for an Army unit to meet its objectives on time and at an acceptable price in terms men—dead and wounded—and materiel. “My assessment remains the same,” Milley told the Senate.

Chief of naval operations, Adm. John Richardson, said that the United States Navy faces the same problem. “I concur with Gen. Milley,” Richardson told the committee. “If we get into one of those conflicts, we’ll win, but it going to take a lot longer than we’d like and it’s going to cost a lot more in terms of dollars and in casualties.”

Gen. Robert Neller, commandant of the United States Marine Corps, also agreed with his peers. “I agree, we’ve build a force that’s been focused on the counterinsurgency fight, and while we’ve been doing that effectively, our potential adversaries have recapitalized from the ground up and built a force that has very significant capability that grows everyday,” Neller said. “So we’re in the process now of getting ourselves back to where [we need to be] and looking at those capabilities we need to match that up.”

U.S. Air Force chief of staff Gen. David L. Goldfein was more measured in his testimony, but agreed with his peers in aggregate. Goldfein said that it is important to ask what kind of conflict the Pentagon is preparing for. If the U.S. military is preparing for a fight against a major regional war while deterring another in another theatre while also securing the U.S. strategic nuclear deterrent and defending the American homeland simultaneously, then the military is facing a high risk, Goldfein said. “But you’ve got to walk down that line,” Goldfein said.

Milley—whose service along with the Marine Corps most directly faces off against America’s enemies—did not shy away from describing the consequences of sending units that are not fully prepared into battle against a near-peer threat. “The butcher’s bill is paid in the blood of American soldiers for unready forces,”Milley said. “We have a long history of that— Kasserine Pass, Guadalcanal, Okinawa, Tarawa, Task Force Smith in the Korean War. It goes all the way back to Bull Run—Lincoln thought he was going to fight a war for 90 days. Wars are often thought to be short when they begin—they’re not. They’re often thought to cost less than they end up costing and they end up with outcomes and take turns you never know. It’s a dangerous thing.”

The best way to prepare for conflict is to deter the enemy so that it does not come to war, Milley said. But if war does break out, the best way to fight it is by winning quickly and decisively. “The best thing I know off is to ensure you have forces that are sized, trained, manned and equipped and very, very capable to first prevent the war from starting to begin with, and then once it starts, to win and win fast and win decisively,” Milley said. “That’s the most humane thing to do when you’re engaged in combat. Otherwise, you’re expending lives.”

This first appeared last September and is being reposted due to reader interest.