America Desperately Needs More Submarines (Thanks To Russia and China) 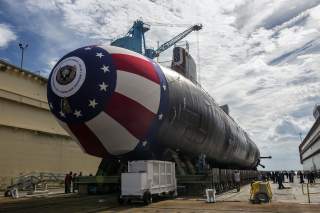 With the United States Navy increasing its stated requirement for nuclear-powered attack submarines (SSNs) from 48 to 66, the future looks bright for General Dynamics Electric Boat division if the U.S. Congress delivers the funding needed to build those boats. Meanwhile, the company on track with the development of the Columbia-class nuclear-powered ballistic missile submarine (SSBNs) which replace the Reagan-era Ohio-class boomers as backbone of America’s strategic deterrent.

“I think they increased recently their shipbuilding plan by 18 SSNs, that's about a 38% increase from 48 to 66, consist of Virginia-class. So that would be very, very encouraging, if that comes to pass. We will see.”

The Virginia-class program is one of the smoothest running programs in the Pentagon’s portfolio. The massive attack submarines are often delivered to the service ahead of schedule and often under cost targets. The Columbia-class boomer looks likely to continue that trend.

“Work on our submarine programs, that is production on Blocks 3 and 4 for the Virginia-class and engineering on the Columbia ballistic missile submarine replacement, continue to perform nicely,” Novakovic said.

Design work on the massive 20,810-ton Columbia-class boomers is proceeding smoothly. The boats are scheduled to start construction in 2021 and enter service in 2031. There is little margin for error because the Ohio-class SSBNs will start to be retired right about at the same time. Any delay in the construction of the Columbia-class could undermine the U.S. strategic nuclear deterrent.

“We're positioning ourselves, as you all know, for the Columbia ballistic missile submarine,” Novakovic said.

“The design is going extremely well, and we're on track to begin the build process exactly when we thought we would. So, we see the undersea deterrent and the undersea warfighting capability of the U.S. Navy as a key national security imperative as clearly evidenced by the Navy's interest in increasing subs.”

A recent Navy report to Congress states that building two SSNs and an SSBN per year is feasible—which would give the service seven additional boats by 2030. But even seven boats will not help the service meet its revised requirement for 66 attack submarines. Seven boats will only help to arrest the fleet’s decline—which is forecast to shrink to only 41 boats by 2029.

The demand for submarines is only going to become more intense as Russia and China continue to challenge the United States in the undersea domain.

Dave Majumdar is the defense editor for The National Interest. You can follow him on Twitter: @Davemajumdar