America is Developing Its Own 'Invincible' Hypersonic Weapons 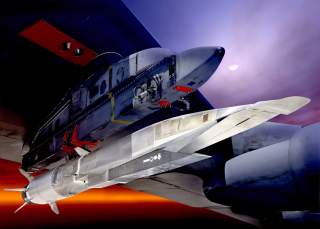 The US Defense Advanced Research Projects Agency, or DARPA, is developing ‘invincible’ hypersonic weapons similar to the Russian ones alluded to by President Vladimir Putin in a speech in Moscow on Thursday.

Putin said in parliament that Russia has developed an “unstoppable” hypersonic missile that can’t be downed by Western air defenses.

“DARPA and the US Air Force are working on two hypersonic weapon concepts. One is the Tactical Boost Glide weapon,” military website Defense One said on Friday. “A rocket accelerates the craft to very high speeds and altitudes, then glides back to earth. The other is the hypersonic air-breathing weapon concept, or HAWC, whose scramjet engine takes in air at supersonic speeds, compresses it, and pushes it through a nozzle out the back.”

DARPA director Steven Walker said the top-secret US arms research agency is focusing on breakthroughs that can be configured as part of new weapons systems, while calculating out how much these weapons will cost.

“Things are moving,” Walker was quoted as saying. “This is becoming not just [a science and technology] thing. The services are interested in moving forward with real capabilities.”

But Walker also says US R&D on hypersonic weapons isn’t keeping pace with Russia and China. He noted that DARPA is pushing to test a hypersonic missile before 2020 but the agency needs more resources.

“If you look at some of our peer competitors, China being one, the number of facilities that they’ve built to do hypersonics… surpasses the number we have in this country. It’s quickly surpassing it by 2 or 3 times. It is very clear that China has made this one of their national priorities. We need to do the same,” Walker told a press briefing.

The DARPA director declined to comment on Putin’s claim that Russia has a hypersonic missile that can beat enemy antimissile systems.