America Is Escalating Its War of Words with North Korea 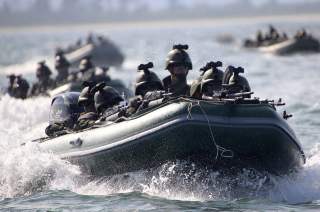 The United States is continuing to up the ante in its war of words with North Korea. Yesterday, a nuclear-capable Northrop Grumman B-2A Sprit stealth bomber based out of Whiteman Air Force Base in Missouri conducted a long-range training mission in the Pacific as Washington continues to increase the pressure on Pyongyang.

“A B-2 Spirit from Whiteman Air Force Base conducted a long-range mission to the U.S. Pacific Command area of responsibility this weekend,” reads a statement from the U.S. Strategic Command. “Long-range missions familiarize aircrew with air bases and operations in different geographic combatant commands, enabling them to maintain a high state of readiness and proficiency. These missions validate our always-ready global strike capability and are a visible demonstration of commitment to our allies and enhancing regional security.”

Earlier, U.S. Secretary of Defense Jim Mattis, who was in Seoul for a bilateral meeting with his South Korean counterpart Song Young-moo, reiterated that if North Korea strikes at the United States or its allies with a nuclear weapon first, that it would be game over for Pyongyang. “Make no mistake any attack on the United States or our allies will be defeated,” Mattis is said on October 27. “Any use of nuclear weapons by the North will be met with a massive military response, effective and overwhelming.”

Mattis further reiterated that North Korea is faced with a lopsided military balance that favors the United States. “North Korea should harbor no illusions: the DPRK is overmatched the Republic of Korea-United States alliance,” Mattis said. “If it remains on its current path of ballistic missile and atomic bombs, it will be counterproductive. In effect, the DPRK will be reducing its own security.”

Mattis also repeated the Trump administration’s mantra that Washington will not tolerate a nuclear-armed Democratic People’s Republic of Korea (DPRK). “The United States does not accept a nuclear North Korea,” Mattis said. “Diplomacy remains our preferred course of action. As I have repeatedly emphasized our diplomats are most effective when backed by credible military force in this sort of situation.”

Song, whose country has had an uneasy peace with the North since the Korean War ended in an armistice on July 27, 1953, condemned Pyongyang’s nuclear provocations and urged the DPRK to comply with UN Security Council resolutions.

“The ROK and U.S. government condemn in the strongest terms the reckless provocation by North Korea, including the six nuclear tests and the multiple ballistic missile launches,” Song said. “Our two governments have once again urged North Korea to comply with the multiple UNSC resolutions.”

Meanwhile, Seoul is continuing to support Washington’s efforts at a diplomatic solution that would result in a denuclearized North Korea—though it is unclear how that might be achieved.

“Furthermore, we have agreed to continue supporting the diplomatic efforts by the Korean and U.S. governments to denuclearize North Korea and back up our government's efforts with firm ROK-U.S. combined defense posture,” Song said.