America Is Finally Starting to Take Space Seriously (Could It Lead to Star Wars?) 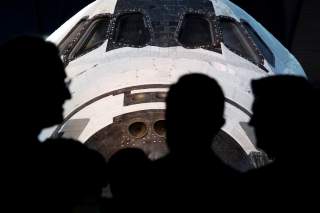 The last couple of weeks have been big ones for space in the US. Vice President Pence chaired the newly re-formed US National Space Council, the peak body for charting US space policy, which had lain moribund under the previous Obama administration. The key news for the military was that a full-scale strategic review of space warfare was underway, headed by National Security Adviser H.R. McMaster.

The review is reportedly seeking to strengthen the safety, stability, sustainability and resilience of US space activities. The goal is a capability that will allow the US to deter, and, when necessary, defeat adversaries’ space and counter-space threats. One plank will be building partnerships with the commercial space sector to ensure US pre-eminence and to maintain and extend US human and robotic presence beyond Earth.

Sustainment of US space capability implies a number of key developments. First, the US needs not only to protect existing space capabilities, but also to be able to rapidly reconstitute lost capabilities. That demands an effective launch capability, and an ability to exploit new ‘Space 2.0’ technologies as a surge capacity for launching replacement satellites quickly in a crisis. The commercial space launch sector, with players such as SpaceX and Blue Origin using innovative reusable rocket technology, is well placed to contribute. SpaceX recently launched the US Air Force’s X-37B on its latest highly classified mission.

The emphasis on space control—the use of offensive and defensive counter-space capabilities—continues a trend begun under Obama in response to Chinese and Russian anti-satellite (ASAT) activities, including testing of ASATs and delivery systems in 2007 and 2014. Obama initially adopted a policy of strategic restraint on space weapons, instead relying on legal norms and dissuasion through space situational awareness to prevent the weaponisation of space. It kept offensive space control in its back pocket in case softer methods failed to work. Well, they didn’t work, and the Trump administration must now wrestle with this issue.

US Air Force Secretary Heather Wilson seems ready to move from strategic restraint to active offensive and defensive space control capabilities. She notes, ‘We have to be able to do something if things are going wrong. Offensive weapons will be needed. We need the ability to create effects, defend ourselves and deter actions.’ Those comments coincide with a new CSIS report, Escalation and deterrence in the second space age that considers space as a contested domain, examines how the US can best deter threats, and gives an overview of current thinking on the nature of space war.

The CSIS report makes clear that deterrence in space will require the US to clearly communicate that it has the capability to withstand and respond to an attack. That in turn will demand ‘a more refined US declaratory policy that identifies and sequences US escalation options in response to an attack in space’ (p. 31). The report says that the emphasis should be on identifying threats clearly and recognising grey-zone actions that are reversible as potentially non-strategic and thus not warranting escalation. It reinforces the importance of building resiliency into US and allied space capabilities, including by disaggregating space systems via small satellites to avoid a catastrophic loss of space support. But the report also states that the US must have a suite of capabilities and a willingness to use them in order for space deterrence to be credible. Those include the full range of offensive counter-space capabilities.

The CSIS report provides a firm policy foundation for the US government to proceed with its strategic review of space warfare. While space may be seen as a global commons, it’s no sanctuary from the use of force. A more mature and pragmatic space deterrence policy, backed up by credible offensive and defensive counter-space capabilities, is essential if the US wishes to meet the challenge posed by China, Russia and other opponents who are moving determinedly to acquire the means to threaten US space capabilities.

Australia, as a key US ally, needs to get on board with this effort. We should seek to share the burden with the US in a contested and congested space domain. Australia already supports the US through enhanced space situational awareness with the relocation of optical telescopes and C band space surveillance radars to the North West Cape. But merely offering the ground segment isn’t sufficient. Given the clear importance to the US of rapid reconstitution capability via small satellites, Australia should seek to contribute to that capability using locally developed satellites to meet both US and Australian military needs, launched from Australian sites. Australia is geographically well positioned to access polar and equatorial low-Earth orbits from sites in Northern Australia, has a burgeoning space industry, and will have a new space agency to take the lead. Now is the time for Australia to take burden-sharing into orbit.