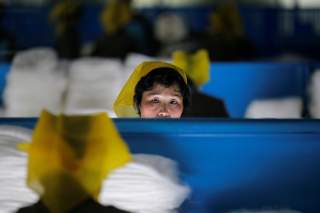 With some notable exceptions, overlooking the Kim family regime’s barbarity against its own citizens has been standard practice in the civilized world, and since long before North Korean nuclear weapons and ICBMs became a believable threat.

North Korea’s nuclear weapons and missiles get most of the attention, while the decades-long brutalization of the North Korean people at the hands of the Kim family is usually an afterthought. It shouldn’t be.

In 2005, while serving as the US Marine Attaché in Tokyo I spoke at a UN-sponsored symposium on stopping North Korea’s nascent nuclear weapons program.

The speakers offered different formulas of carrots (oil, food, money), assurances, and pressure that would prompt Kim Jong Il (the current Kim’s father) to give up his quest for nuclear weapons.

Accomplish this, and all would be right with North Korea.

When my turn came, I noted that nobody had mentioned the humanitarian catastrophe and widespread torture that North Korean citizens were suffering. This alone, I argued, was reason enough to isolate and force change in the country.

At the break, two men introduced themselves as being from the US Department of Defense. One of them said, “We wish we could say that.” My answer, “You mean we can’t?”

With some notable exceptions, overlooking the Kim family regime’s barbarity against its own citizens has been standard practice in the civilized world, and since long before North Korean nuclear weapons and ICBMs became a believable threat.

Today’s efforts are akin to jousting with Cambodia’s Khmer Rouge back in the late 1970’s over its nuclear and missile programs (if they’d had them) while not mentioning the Killing Fields where one third of the population was being slaughtered.

Or, imagine the Afrikaner-led South African regime shuttering its nuclear program (which it did) and the international community making no further mention of apartheid.

The scant mention of barbarity in North Korea is ironic, given that it is so well documented, and by the very organizations that should be trumpeting it to high heaven.

The United Nations Human Rights Council and the US State Department have recorded in detail the Kim family regime’s physical and psychological savaging of its own population.

Civilian organizations such as the Committee on Human Rights in North Korea also do good work on this subject.

These detailed, documented reports effectively lay out the Prosecution’s brief against the Kim family regime for crimes against humanity.

The civilized world collectively, or even one country alone, can bring North Korean officials up on charges and try them at The Hague or elsewhere.

Slobodan Milosevic, who was actually arrested and tried at The Hague – dying in custody before a verdict – was a pussycat compared to the Kim’s.

And if former Chilean president, Augusto Pinochet could be detained in the UK on a warrant by a Spanish magistrate, how much more deserving are the Kim family regime and its representatives?

Highlighting North Korean human rights also puts the regime’s foreign aiders and abettors – China, Iran, Syria, Singapore, Malaysia, and many others – on record as either being for barbarity or against it.

This is even more useful if combined with an aggressive effort to expose and restrain countries and companies doing business with the Kim family.

The West’s ability to overlook beastliness by dictators – especially leftist ones – can seem unlimited.

Look at what Robert Mugabe has been allowed to do in Zimbabwe over the last 37 years. And the Castro brothers were no slouches at brutal oppression, while the Chinese Communist Party’s treatment of human rights lawyers and others is only of sporadic interest.

But, it’s often argued, if these issues are raised too loudly it will make the regime act even more cruelly. Read the UN reports of the North Korean gulags and one might ask how much worse things could be?

It’s also suggested that most North Koreans don’t really mind rough treatment – brainwashed and accustomed to it as they are. Such was also said about residents of the old-Soviet bloc nations.

When running against then-candidate Jimmy Carter in 1976, President Gerald Ford let slip a comment to the effect that Eastern Europeans didn’t mind Soviet domination all that much.

The Carter camp savaged Mr. Ford on this point – though since leaving the White House Jimmy Carter hasn’t shown much interest in North Korean gulags. Quite the opposite.

The United States is best positioned to speak up about human rights in North Korea, but needs to find its voice and consistently use it. And encourage (or strong-arm) many other nation’s to use theirs as well.

Many special envoys won’t be missed, but this isn’t one of them. Mr. Tillerson should reconsider, and fill it with someone articulate, forceful, and who won’t shut up.

The North Korean problem is as much an issue of human rights as it is of nuclear bombs and missiles. The world – even the civilized part – seems to need regular reminders.

Grant Newsham is a senior research fellow at the Japan Forum for Strategic Studies in Tokyo with over twenty years experience in Japan and Asia as a US Diplomat, business executive, and US Marine Officer.