Is America Prepared for a Bloody Clash with North Korea or a Naval Conflict with China? 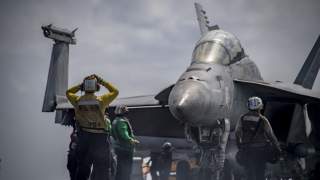 The United States is the world’s last remaining superpower. Russia has declined to a lesser state status but a rising China has been making moves in the South China Sea and even into the Indian Ocean.

In response to China’s expanded focus and amid concern that Beijing is becoming a seafaring threat, Washington has recently partnered with Canberra, New Delhi, and Tokyo to form a new alliance – informally referred to as the Quad – to counter this. However, there are questions about how effective this group will be.

While treaty obligations require Washington to come to Tokyo’s aid should Beijing attempt to occupy the Diaoyus/Senkakus in the East China Sea, one has to wonder if the US is truly willing to confront China over an uninhabited set of rocks.

This is complicated by the Potsdam Declaration as World War II came to an end stating that “Japanese sovereignty shall be limited to the islands of Honshu, Hokkaido, Kyushu, Shikoku, and such minor islands as we determine.”

So, to whom should those islets really belong?

A tangle of obligations

This brings up the long-simmering issue between Seoul and Tokyo over the barren islets of Dokdo/Takeshima in the East Sea/Sea of Japan. These rocks were the first bit of Korean territory that Imperial Japan seized as it subjugated the Korean Peninsula in the early part of the 20th century.

Now occupied and controlled by Seoul but still claimed by Tokyo, Washington has not sided with either in this matter. This group of small isles roughly midway between Japan and Korea was not specifically mentioned by the 1945 Potsdam language. With both South Korea and Japan being allies, which side would Washington support if the situation required intervention on this issue?

Consider also that in the South China Sea, the US has not done much to assist in defending the integrity of the Exclusive Economic Zones (EEZs) of Malaysia, the Philippines, Taiwan, and Vietnam that have legally-established entitlements within China’s claimed Nine Dash Line. At stake are extensive fishing rights and potentially large energy reserves needed by all nations in the region.

But Washington does have military agreements with both the Philippines and Taiwan.

To sea or not to sea

The perception is that the US has not made Freedom of Navigation Operations (FONOPs) in the South China Sea a priority. FONOP sailings in the disputed waters are infrequent, and when Washington does sail warships in the area, its explanations are not phrased strongly enough to send the correct message to Beijing as to who owns what in those contested waters.

Now China is venturing into the Indian Ocean. The reason for all this activity by China is multifold. There are riches in those waters – fishing rights and suspected gas and oil deposits. But another, equally important reason for China’s expanding focus is geopolitical.

Beijing’s energy supplies from the Middle East flow along sea lines of communication that at a number of points must traverse choke points. China wishes to safeguard approaches to the Strait of Malacca, one of those choke points. The Maldives chain of atolls and small islands in the Indian Ocean are an excellent vantage point to the west of that choke point.

So, what can the allies expect from the United States on larger issues such as defense from either North Korea or China when Washington is so wishy-washy about lesser issues?

One could make the case that the US is preserving is geopolitical and military capital for bigger issues. That makes sense – up to a point. What, though, when a lack of American action in the smaller issues creates a growing lack of faith as to whether Washington would come to their aid when the chips are down?

With US President Trump’s focus on Make America Great Again, it has become a concern by a number of allies as to whether the US would commit forces to their defense, should the need arise. This is one reason that Manila is cozying up to Beijing, hedging its bets. As the Philippines’ strongman Duterte recently jibed, “just make us a province” of China, even while Manila is joining Washington to counter it in the South China Sea.

If China sees no meaningful US response to its aggression in the South China Sea or the Indian Ocean – where interestingly enough, the US has its own island outpost on Diego Garcia just to the south of the Maldives – Beijing will become emboldened. That certainly does not bode well for anyone.

Already Seoul is moving independently, not only because Moon is naturally inclined to do so as leader of a middle power, but also because the US has created doubts in the minds of some in the South Korean government about the will of the US to defend it. This could lead to more frequent and larger provocations by Pyongyang.

Does the US have the will for a bloody confrontation with North Korea – or even a naval conflict with China? Fifty years of history indicate that the US is either not prepared for that or inclined to do so. Washington was caught off-guard by the Pueblo incident in 1968, the EC-121 disaster in 1969, the Axe Murders of 1976, and a host of lesser but still deadly events in the intervening years.

Further, that is from only a US-centric viewpoint. With regard to how the allies might view things, consider that the US took no action against North Korea’s Blue House commando raid to assassinate South Korean President Park in 1968, the sinking of the Cheonan with the loss of 40 sailors in 2010, and numerous other hostile actions by Pyongyang involving South Korean fatalities over the years.

It is extremely unlikely that major provocations can go unanswered without serious consequences. Through these unresolved challenges to US power in Asia, Beijing and Pyongyang come to an understanding of where Washington’s fault lines are – and are not. As Sun Tzu noted in The Art of War, knowing the enemy is critical.

Now there are signs pointing toward a confrontation of some sort coming this year. The question is how – and how well – will Washington and its allies will respond.