Russia vs. America: The Race for Underwater Spy Drones 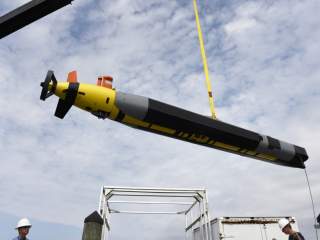 Russia is developing a family of unmanned surface and underwater vehicles, a high-ranking official in that country’s navy said this week. While the U.S. Navy has been developing naval drones for more than a decade, this is the first indication that Moscow is working on similar capabilities.

“Work will be continued in 2016 to develop unmanned boats that can be based both on ships and on the shore," Vice Adm. Alexander Fedotenkov, deputy commander-in-chief of the Russian Navy told the TASS news agency on Jan. 21.

While both the U.S. Navy and Russia are developing naval drones, the technology is in its infancy. The U.S. Navy is relying on commercially available drones until the technology matures. USS North Dakota (SSN-784)—a Virginia-class nuclear attack submarine—launched and recovered a Norwegian-built Remus 600 while submerged for the first time during the summer of 2015. “This was something they thought we could go do. We went out, and we proved that,” North Dakota’s commanding officer, Capt. Douglas Gordon, said at the time.

While the technology is still in the early years, UUVs show great promise for the future. A few months I ago I asked naval expert Bryan Clarke, a senior fellow at the Center for Strategic and Budgetary Assessments, what the potential applications are for such systems might be. This what he e-mailed me:

“The Department of Defense (DoD) has pursued a large variety of UUVs during the past decade, mostly for mine clearing and ocean surveillance and launched from surface ships or shore. These applications did not require particular sizes of UUVs. As UUVs become more integrated with submarines as part of a family of systems, the Navy should focus on UUVs that can use the submarine’s ocean interfaces and conduct the most likely UUV missions. Specifically, the Navy should pursue the following UUV types as part of its undersea family of systems:

“Micro UUVs (about 6” or less in diameter) are inexpensive and improving in their endurance and on-board power. They could be procured and deployed in large numbers or swarms as weapons, to survey the ocean floor, or interfere with enemy ASW operations.

“Small UUVs (about 12” in diameter) are commonly used today for surveys and minehunting, such as the Navy’s Mk-18 UUV. They will be able to take on other surveillance or attack missions as part of the Fleet Modular Autonomous Undersea Vehicle (FMAUV) program and operate from submarines as well as surface ships and aircraft.

“Medium UUVs (about 21” in diameter) are the size of the Navy’s Mk-48 submarine-launched torpedo. And while the Navy is not operating UUVs of this size today, the Modular Heavyweight Undersea Vehicle (MHUV) program plans to make the torpedo of the future able to be configured to conduct a range of missions, from mining and long-range attack to electronic warfare.

“Large UUVs (about 80” in diameter) such as the Navy’s Large Displacement UUV (LDUUV) are designed to use the planned Virginia Payload Module (VPM) tubes in Block V Virginia-class submarines. The LDUUV will provide a way for submarines to increase their sensor reach, expand their payload capacity, or deliver payloads into areas that are too risky or constrained for the submarine to reach.

“Extra-Large UUVs (More than 80” in diameter) would be designed to launch from shore or very large ships with well decks or “moon pools.” They could be used for long-endurance surveillance missions or primarily as “trucks “ to deliver other payloads and UUVs. Experience with LDUUV will help inform concepts for using XLUUV.”

Essentially—once perfected—unmanned underwater vehicles could revolutionize naval warfare. But only time will tell.