America Will Showcase Stealthy F-35s at This Asian Airshow 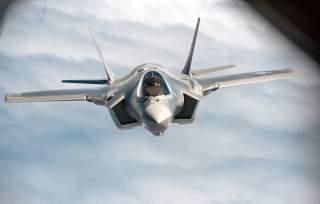 Two F-35Bs have reportedly arrived in Singapore to be showcased at the city state’s biennial aerospace event near Changi Airport. Their appearance marks the super-fighter’s Southeast Asian debut, which commenced service in 2015.

Singapore’s Chinese language Lianhe Zaobao newspaper reported on Monday that military aficionados and members of the public will be able to see the supersonic, super-maneuverable fifth generation stealth fighter, the pride of the US Air Force, up close on the final two days (Saturday and Sunday) of the show, which starts on Tuesday.

There had previously been rumors of the Singaporean military exploring the possibility of procuring a dozen of F-35s. The planes have a hefty price tag of US$95 million each for the conventional takeoff and landing F-35A model, and a whopping US$123 million for the short takeoff and vertical landing F-35B variant, which doesn’t need a catapult when landing.

The Singaporean Air Force, which will soon celebrate its golden jubilee, aims to further modernize and upgrade an air fleet currently dominated by F-15s and F-16s. As a small country, Singapore’s military has always looked to superior air strength to protect its borders and interests.

It is believed that the plane’s maker, Lockheed Martin, will pitch for orders of F-35s and other fighters at the show, which has evolved into a global event on par with airshows in Paris and Dubai.

However a 2016 Bloomberg report noted that the Lion City had “put on hold” and may even drop its order for 12 F-35s as the nation already had sufficient air power.

The original, tentative order was for four F-35B jets by 2022, with an option for an additional eight aircraft.

Singapore joined the F-35 program in 2003 as a so-called Security Cooperation Participant, which allowed the city state’s defense ministry to explore configurations and modifications to the aircraft to meet its own specific operational requirements.

Currently, no Asian countries have the jet, though its smaller and more conventional cousin, the F-35A, is used by the Japanese and Koreans.

Reuters also reported that the US State Council is sending an undersecretary responsible for overseas defense technology and arms sales to the airshow. Other than the F-35, missile systems made by Raytheon will be among the cutting-edge weaponry on display.