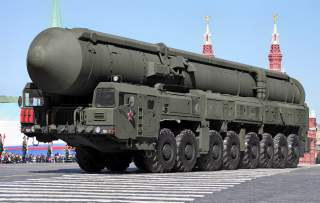 But in reality, the Pentagon has studied mobile launchers for decades and has generally found them to possess several distinct disadvantages. America nearly built two versions, a rail-mounted Peacekeeper and road-mobile “Midgetman” missile. When the military did commission prototypes such as the Hard Mobile Launcher in the 1980s, among others, budget priorities and domestic politics scuttled them. And that was during the Cold War.

Decades from now, the U.S. Air Force may embark on radically new method — for the United States — of deploying nuclear-armed intercontinental ballistic missiles. These would be mobile ICBMs carried on road or rail launchers … or perhaps other, even more unusual methods of keeping these weapons of mass destruction from being knocked out in a first strike by Russia or China.

The planning for a mobile ICBM force exists in almost total secrecy. But in April, Arms Control Today, the monthly publication of the Washington, D.C.-based Arms Control Association, reported that the Air Force is considering building mobile launchers to enter service around 2050 — with new nuclear missiles to boot — as existing Minuteman IIIs age out.

It’s one of three options, and the only one to include mobile launchers, under the Ground-Based Strategic Deterrent program. We don’t know any further details, but it calls to mind a future where nuclear missiles roam America on trucks, trains or even barges on the Mississippi.

This isn’t the first time information about mobile launchers has trickled out of the Pentagon. But it’s another indication that the idea — in practice in Russia and China — and studied for decades in the United States during the Cold War, still has its adherents among top brass. Nuclear arms experts, however, tend to be incredulous because mobile ICBM launchers are in general a really bad idea.

Where to begin. The subject is extremely complicated and there are voluminous essays written on the subject. Nuclear weapons expert Jeffrey Lewis wrote a far more concise takedown four years ago when the Pentagon hinted in a report at possibly building mobile launchers.

“This is nuts,” Lewis wrote at Arms Control Wonk. “They should just quit while they are behind.”

The general theory goes like this. The argument for mobile launchers is that they promise to be harder to destroy than what currently comprises America’s “nuclear triad” of land-based ICBMs, nuclear-armed bombers and ballistic missile submarines.

See, each “leg” of the triad is designed to complement the other by making up for comparative advantages and disadvantages.

ICBMs are almost impossible to stop and they travel extremely fast, but other countries know where the silos are. Submarines are nearly impossible to find and destroy, but can take hours or days to move into position. Bombers are extremely visible and have a deterrent effect — and can be recalled — but are vulnerable to being shot down or destroyed on the ground.

However, mobile launchers could feasibly be anywhere and launch their nuclear payloads much faster than bombers or submarines. But like submarines, they would be difficult for Moscow and Beijing to track and destroy. Even if you had a general idea of where the mobile launchers are, you’d need a lot of missiles to get them all — forcing the attacking nation to expend most of their valuable nukes.

But in reality, the Pentagon has studied mobile launchers for decades and has generally found them to possess several distinct disadvantages. America nearly built two versions, a rail-mounted Peacekeeper and road-mobile “Midgetman” missile. When the military did commission prototypes such as the Hard Mobile Launcher in the 1980s, among others, budget priorities and domestic politics scuttled them. And that was during the Cold War.

The vehicles will be heavy at around 100 tons each. The vehicles must be radiation-protected and capable of handling shocks to sensitive electronic components and tanks full of flammable and toxic rocket fuel. If they drive exclusively off-road, the government needs vast tracts of land to keep them hidden. The problem is that 100-ton trucks carrying nuclear missiles will inevitably tear up the environment.

The military could drive them on roads, but they will not be able to cross most bridges due to the great weight. This option would also make them harder to hide, and create security risks by mixing with civilian traffic. A nuclear missile in a remote silo far away from population centers is never completely danger proof. Try driving one down the highway and convince American voters to accept it.

There is a similar set of problems moving launchers by rail. And during the Cold War, the Pentagon also considered mounting nuclear missiles on barges, although it didn’t go anywhere because of limited space on America’s rivers and the proximity of major waterways to population centers.

In any case, the scenario of nuclear weapons traveling the American countryside may never happen short of imminent nuclear war, as the United States is bound by treaty to keep mobile ICBMs — if it ever builds them — locked away.

The New START treaty between the United States and Russia, which went into force in 2011, restricts deployed mobile launchers to ICBM bases and nondeployed launchers to military production, repair and storage facilities. Which, in the event of a nuclear war, negates mobile launchers’ mobility advantage. It would take hours to disperse the slow-moving vehicles away from their bases as the nukes begin flying.

All told, this means they’re vulnerable like bombers, more expensive than silos and less stealthy than submarines. And right now, the Air Force is discussing, away from the public eye, whether to build them.