America's Capitol Is Defended by This Missile (From Norway) 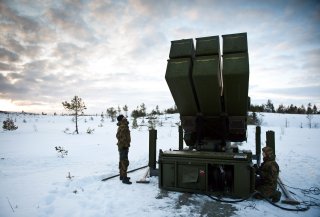 The NASAMS (Norwegian Advanced Surface to Air Missile System) is one of Norway’s most successful defense projects, winning successful sales from Indonesia to Finland. NASAMS batteries even form the only static surface-to-air missile (SAM) defenses in the United States, guarding Washington DC. However, when the NASAMS project was started, the aspirations were not so grand. Norway was simply looking for a missile that could replace their aging Nike Hercules SAMs. But in designing a system to replace it, they designed one of the most modular, flexible SAMs developed by a NATO nation.

The story of the NASAMS begins in the 1980s. At the time, Norway was considering a total revamp of their air defense systems, which consisted of Nike Hercules batteries. A study, called the “Hawk Study” was commissioned by Norway to investigate how the new German Roland II system would compare to an upgraded Hawk system. The study involved computers running simulations of various air attack missions. Interestingly, the simulations were coded in the Simula programming language, one of the first object-oriented programming languages, which was developed at the Norwegian Computing Center in Oslo. Pilots from the Royal Norwegian Air Force created simulated attack runs, which they drew on transparent paper, which were then digitized to create simulated attack runs for the anti-air simulation.

The result of this study was that different air defense systems were preferable for different regions. In the regions that were prioritized (Trondheim), the simulation found the upgraded Hawk to be a better system. The recommendations were taken into consideration, and an upgraded Hawk and air defense command and control system under the name NOAH (Norwegian Advanced Hawk) was developed. This system was put into service in the 1980s. Due to the high cost of the Hawk missile component of NOAH, the older Nike Hercules continued to defend western Norway.

The modularity of the command and control system developed in the NOAH program meant it was possible to integrate the new American AMRAAM (Advanced Medium-Range Air-to-Air Missile) into it. Some studies were conducted by Harald Kvaale and Arne Tøn that showed that the AMRAAM could be adapted into a SAM. The new system was called NASAMS. It was first acquired to replace Nike Hercules batteries, but eventually replaced the NOAH batteries as well. When replacing the NOAH batteries, simply the missiles and launchers needed to be changed. The NASAMS also had the advantage of cost over the NOAH in the missile itself, as the smaller AMRAAM was cheaper to produce relative to the larger Hawk missiles, even with the more advanced seeker.

The favorable range and accuracy characteristics of the NASAMS (largely due to the advanced American seeker in the AMRAAM) lead to it becoming an export powerhouse. Most recently, one NASAMS 2 system was sold to Indonesia, where it is used to protect the capital. The system itself isn’t restricted to the AMRAAM missile, the system architecture allows it to fire any missile that can be fired from a NATO aircraft. This can be seen as an earlier version of the U.S. Army’s current Multi-Mission Launcher, which possesses similar capabilities. NASAMS has been upgraded to NASAMS 2 in Norwegian service and for export. This update is largely a systems upgrade that allows for better fire-control and Link-16 integration, allowing the NASAMS to share fire-control data with other NATO systems.

One of the primary competitors to the NASAMS is the Russia’s Buk missile. Luckily, some comparisons are available after Finnish Defense Forces tested the NASAMS 2 and Buk-M1. The NASAMS 2 entered Finnish service, designated the ITO12. It replaced the Buk-M1—which was also was in Finnish service— and was designated ITO96. In a pure kinematic analysis, the Buk-M1 is superior to the NASAMS’s AMRAAM because it is a larger missile. The Link-16 capability and the state of the Finnish Air Force was found to address this in doctrine. Finnish Hornet fighters (also armed with AMRAAM missiles) would intercept aircraft at high levels and far ranges and could feed track data to the NASAMS 2 via datalink. The Buk’s fire control radar was also found to interfere with 3G and 4G cell networks due to the frequency it used.

The NASAMS 2 system is arguably more survivable against enemy suppression of air defense assets than the Buk launcher, which is required to switch on its radar to guide the missile onto the target. In the absence of external link data, the NASAMS 2 can also be fired without radar lock due to the ability to use electro-optical (EO) mode. In Finnish service, an EO sensor (mounted on a Mercedes G-Wagen) can provide target data to the NASAMS 2 system. Of course, the NASAMS 2 also uses ground radars of its own, the American MPQ-64 Sentinel 3D radar, which is often offered as an export option with the NASAMS system. In addition to this, the NASAMS 2 missile does not lose target track if an air target dropped below the ground radar’s radar horizon, whereas the Buk would. As a result of this, the Finnish Defense Forces concluded that the NASAMS 2 is the superior system for air defense.