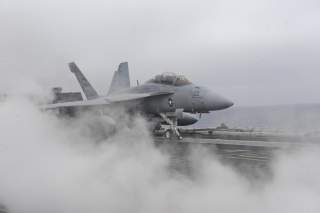 Digital technologies are increasingly prolific and vital components of the U.S. Department of Defense weapons arsenal.  Since the early days of network-centric warfare in the 1990s, to the development of the digital “quarterback” F-35, and today’s Third Offset, the digital nature of the modern U.S. military has become an enduring and unquestioned characteristic.  And for good reason.  Digital advancements enable long-range strike, precision targeting, near real time intelligence-surveillance-and reconnaissance, and joint operations–all core capabilities of U.S. operational campaigns.

Together, these digital technologies have made the United States extremely capable to the point of dominance.  It, therefore, seems illogical to question the overall good of continuing to invest and utilize these technologies. Indeed the acquisition strategy proffered by the Third Offset appears to double-down on these digitally reliant technologies and operations.  However, the U.S. may be coming to a point in which the utilization of digital technologies that has made the U.S. so effective and so lethal has developed into a dangerous digital-dependency.  The danger is that with digital dependency comes both extreme capability and extreme vulnerability so that, paradoxically, the U.S. may at the same time be both more militarily effective and less secure.

What are digital dependency and the Capability/Vulnerability paradox?  Digital-dependency is the reliance on digital technologies to conduct conventional operations; the important difference between digital dependency and digital enablement is that states that are digitally dependent do not retain analog or hard-copy processes to conduct operations when digital capabilities are degraded.  This digital dependency creates a unique situation in which digitally-dependent states are extremely capable and yet are incredibly vulnerable.  This is a potentially unique problem for digitally-enabled weapons because of two cyber characteristics: 1) because of the current offensive balance in cyberspace, the proliferation of digital technologies creates more cyber terrain to defend than may be technically possible, and 2) the infrastructure-like quality of cyberspace (as opposed to a weapons platform) means that digital vulnerabilities are both exponential and networked making entire operations vulnerable instead of particular weapons.  This extreme capability and vulnerability means that a state that is digitally-dependent is highly vulnerable to first strikes from adversaries, even if it is conventionally more effective.  Further, the fear of a first strike on some of these digital capabilities/vulnerabilities may induce a more conventionally capable digitally-dependent state to strike first so that it doesn’t lose the digital capabilities necessary for its operations.  Together, these two first strike incentives mean that the trend toward digital dependency in modern warfare could make crisis situations more precarious and the international system more unstable (for a more in-depth analysis of this paradox, see the August 29, 2016 report from the Center for New American Security).

What does the U.S. needs to do to solve the paradox?  The simple answer to the paradox is to build-in greater digital resilience through acquisitions requirements and increased focus on training for digitally-degraded operations.  However, becoming more digitally-resilient can involve difficult trade-offs.  Not only may it be more expensive to build weapons that can operate with and without digital capabilities, but quite often digital resiliency requires sacrificing some level of effectiveness.  For instance, a recent report from the Government Accountability Office chides the Department of Defense’s Strategic Command for its use of archaic and inefficient floppy-disk technology in our nuclear weapon command and control.  But what the report fails to take into account is that these inefficient technologies are also less vulnerable to cyber-attacks, therefore making our vital nuclear command and control more digitally resilient.  Finally, training and preparing for digitally-degraded operations takes time and resources away from honing our effectiveness with digital capabilities.  That could be a tough sell for commanders who are already strapped for time as they are asked to dominate an increasingly prolific and difficult set of missions.

Jacquelyn Schneider is an instructor at The Center for Cyber Conflict Studies at the U.S. Naval War College in Newport, Rhode Island.  The opinions expressed in this analysis are her own and do not represent the official assessments of the U.S. Navy or any other agency of the U.S. Government.