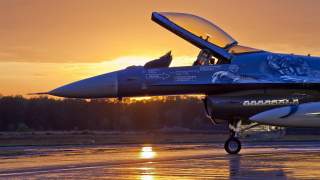 The U.S. Northern Command (NORTHCOM) had earlier issued a Joint Emergent Operational Need for the upgraded radars as new threats to the American homeland have emerged over the years. In addition to terrorists groups such as ISIS and al-Qaeda, the North American Aerospace Defense Command (NORAD) now worries about conventional military threats such as stealthy cruise missiles.

“AESA radar upgrades are critically important to give the F-16 community, the tactical advantage it deserves, and we are honored to provide this differentiating technology for the safety and mission effectiveness of our warfighters,” Bob Gough, Northrop Grumman’s vice president for combat avionics systems, said.

“The APG-83 SABR system is in full rate production and available now for U.S. and international F-16 upgrades.”

The addition of the APG-83 greatly increases the F-16’s capabilities against increasingly sophisticated threats that include new enemy cruise missiles as well as evermore-capable adversary fighters such as the Sukhoi Su-35S Flanker-E. Compared to the F-16’s existing APG-68 mechanically scanned radar, the APG-83—which leverages technology from the F-35’s APG-81—can detect, track and identify greater numbers of targets much faster and at much longer ranges.

The APG-83 also has much higher resolution than the current radar—which is why NORTHCOM wants the new AESA on its aircraft. As NORTHCOM commander Adm. Bill Gortney testified last year before the House Armed Services Committee, the Pentagon is increasingly concerned about the capabilities of new Russian cruise missiles.

“Russia possesses both conventional and nuclear cruise missiles with the range to reach North America and it has proliferated some advanced cruise missile technologies to other actors,” Gortney wrote.

“This threat is real and it is imperative that we develop effective response options to outpace the threat and enhance our deterrence.”

However, the APG-83 is also effective for expeditionary operations.

The new AESA radar can operate in conditions where there is heavy jamming and it also features all-weather, high-resolution synthetic aperture radar mapping capability. The later affords pilots a large all-weather high-resolution surface image for precision target identification and strikes. Indeed, the Air Force—in the years before sequestration (aka the Budget Control Act of 2011)—had intended to retrofit more than 300 of its F-16s with the new radar.

But while arbitrary sequestration budget cuts forced the Air Force to drop its broader F-16 upgrade plans, America’s international partners (Taiwan and the UAE for example) are increasingly interested in purchasing the APG-83 SABR for their Fighting Falcon fleets. The new APG-83 is also the standard radar for Lockheed Martin’s new Block 70 F-16, which the company hopes to export to India and others.

Ultimately, the APG-83 will probably become the standard radar for most of the F-16 fleets around the world. With the F-16 expected to remain in U.S. Air Force service for decades to come, it is only a matter of time before the service expands its APG-83 retrofit program.