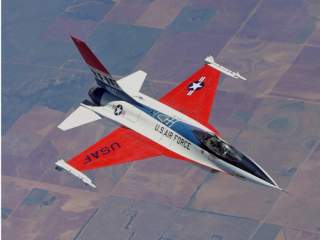 Forty-two years ago on this day, General Dynamics test pilot Phil Oestricher undertook the YF-16 prototype’s first flight during what was supposed to be a high-speed taxi test at Edwards Air Force Base, California.

Oestricher’s so-called “Flight Zero” was completely unplanned and unexpected, but provided extremely valuable data for the development of what eventually became the U.S. Air Force’s mainstay F-16 Fighting Falcon. Oestricher—who passed away on Dec. 18, 2015—said that the flight test plan was to go down the runway pushing the aircraft up to 135 knots, lifting the jet no more than about two feet above the ground. However, because of a wiring problem, the high-speed taxi turned into a series of pilot induced roll oscillations.

“I had intended all the way along to put a little bit of daylight under the wheels—maybe a foot or two—fly about a thousand feet down the runway and land it, and in the meantime checking out the lateral or roll response sensitivity,” Oestricher said.

“I started the run. The airplane accelerated very smartly, of course. Pulled the power back and we had an unfortunate wiring problem in the airplane where the exhaust nozzle would not open up—thus killing thrust. The airplane was very sensitive in roll—and it rolled violently left and I countered with an equally violent right command. We were instantly in a—what’s called a pilot induced oscillation—the airplane rolling back and forth very quickly. It’s turning left all this time—I could see it was going to go out into the dirt. So I just powered it up and let go of the controls and just let it fly away.”

Oestricher said that the YF-16 program gathered an immense amount of data from the unplanned flight—which might never have been gathered during the prototype test phase. Indeed, one of the big discoveries was that the jet’s sidestick controller was far too sensitive—which was corrected as a result of the Oestricher’s flight.

Oestricher’s flight that day was the start of a storied career for what eventually became the F-16. While initially conceived as a lightweight, highly agile visual range dogfighter that would counter the hordes of cheaply built and numerous Soviet MiGs over the Fulda Gap—the Viper, as the jet fighter colloquially known, has evolved into a potent multirole strike aircraft with beyond visual range air-to-air capability.

Even after the stealthy Lockheed Martin F-35 Joint Strike Fighter enters service with the U.S. Air Force later this year, the F-16 will remain the backbone of the service’s tactical fighter fleet for decades to come. While the Air Force does not have the money to perform all the upgrades that it would like—it was forced to cancel the Combat Avionics Programmed Extension Suite in 2015— the service is working to keep the jet relevant for the future.

Some U.S. Air Force F-16s are likely to eventually receive a new Northrop Grumman APG-83 active electronically scanned array radar. Meanwhile, the Air Force is looking at structural upgrades to keep the F-16 airworthy for the years ahead. Earlier this month, the Air Force posted a notice soliciting information from contractors for a program to extend the service lives of 300 Block 40 through 52 F-16s from 8,000 hours to between 10,000 and 12,000 hours.

Meanwhile, Lockheed—which purchased the General Dynamics aerospace business during the 1990s—continues to build F-16s at it plant in Fort Worth, Texas. The company still hopes to sell its newest F-16V model to Indonesia and others in the coming years. But eventually, production will switch to entirely to the F-35. Nonetheless, the F-16 will be flying for decades to come.