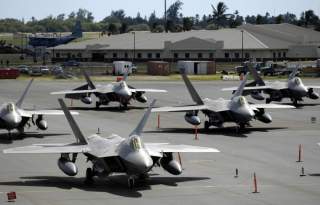 The Pentagon will have to rely on fifth-generation fighters like the Lockheed Martin F-22 Raptor and F-35 Joint Strike Fighter in the event of a conflict with a near-peer adversary such as Russia or China. But unlike during present day conflicts, American forces won’t be able to count on operating from secure bases. Instead, American airpower will have to contend with fighting while under fire from enemy cruise and ballistic missiles—or even air attacks. That means U.S. military commanders will have to pay careful attention to dispersing their forces, logistics and securing their support assets such as aerial refueling tankers and intelligence, surveillance and reconnaissance (ISR) aircraft.

However, while the concept of operating combat aircraft from airfields that are under attack might seem novel, the idea dates back from the Cold War when the U.S. Air Force and its NATO partners assumed that allied air bases in Europe would come under concerted air and missile attack from Warsaw Pact forces. While many of those concepts have fallen by the wayside in the post-Cold War-era, many of those techniques that the U.S. Air Force developed during that period might have applications in the Pacific as China rises to become a potential great power challenger to the United States.

“That’s a lot like the stuff we did during the Cold War, I think we may be reinventing coming we’ve already done,” said Col. Max Marosko, deputy director of air and cyberspace operations at Pacific Air Forces headquarters and who was also part of an elite cadre of instructor pilots who helped bring the F-22 Raptor into operational service. “There’s a lot of things we did in the Cold War timeframe—Concealment, Camouflage and Deception (CCD), airfield repair—air base operability—so there were a lot of lessons that we learned for that theatre—that threat—and potentially there could be some applicability out here in the Pacific.”

Moreover, the Pentagon could also apply some of the lessons from the late 1990s to the Pacific theatre. Prior to the invasion of Iraq, the Air Force had been developing an Air Expeditionary Force model to rapidly move airpower into a theatre of operations. The AEFs would often be deployed to austere airfields where the facilities are not up to the level U.S. forces are generally accustomed to. Indeed, Marosko said he recalls deploying to bases in the Middle East where pilots and maintainers would often sleep in tents and eat military MRE rations for weeks at a time during their deployment. That kind of model could be used in the Pacific to disperse the Air Force’s F-22s and F-35s to minimize their vulnerability during a conflict.

Indeed, in a recent Mitchell Institute paper, Marosko and Lt. Gen. Jeff Harrigian, commander of U.S. Air Forces Central Command—who was unable to participate in this article due to time constraints—suggested dispersed basing for the service’s fifth-generation assets to maximize their survivability. Fifth-generation aircraft would have to “rapidly deploy and disperse to numerous military and civilian airfields, effectively avoiding concentrating no more than a single squadron at any one location,” the two officers wrote. “Consequently, adversary planners and targeteers are unable to effectively use ballistic or cruise missile attacks to score a pre-emptive ‘knock-out’ blow against forward deployed aircraft, and fifth generation missions continue with little impact.” However, Marosko noted that such a dispersed basing construct means that the Air Force would have to pay especially close attention to logistics—which would be critical to sustaining those jets.

But one of the problems with both the F-22 and the F-35 is that both are short-range tactical fighters that would require tanker support during any conflict in the Pacific. The tankers and ISR assets could be a potential Achilles’ heel since a peer-level adversary is certain to make an attempt to attack those aircraft. The best solution to that problem might be to base the tankers outside the range of potential threats. “We’d have to try to move them from a threat area, but still keep them close enough to utilize them,” Marosko said. “Our tankers are essential to projecting power—they are going to be vital and we are going to have to protect them.”

Additionally, the Air Force will have to shore up its datalinks and security procedures so that fifth-generation fighters are able to seamlessly share data with each other and with other allied forces, Marosko said. The Air Force is working on developing a new advanced tactical datalink that will enable the F-22 and F-35 to share much more of their data in real time. The goal is eventually to form what retired Lt. Gen. David Deptula, dean of the Mitchell Institute, refers to as a combat cloud—where every sensor can be used to cue a weapon that is connected to the network.

Ultimately though, while fifth-generation aircraft will help the United States maintain its edge, the Pentagon will have to move forward much more quickly to develop game-changing technologies such as hypersonics in this new era of great power competition. “The difference between us and our near peers is closing every day,” Marosko noted.