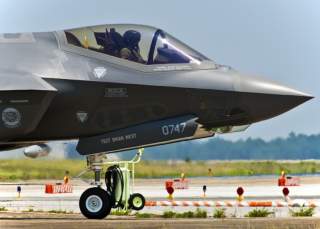 America's F-35 Joint Strike Fighter is easily one of the most hotly debated weapons platforms in decades--and certainly one of the most controversial. The reasons why are quite obvious: with a total cost of $1 trillion over the program's lifetime, the integration of game-changing technological advancements that seem almost out of a science fiction novel and the expectation that it will eventually replace many of the current 4th generation planes in the U.S. Air Force arsenal means much is demanded of the 5th generation aircraft.

But as the F-35 moves out of the factory and into the real world, how would it do against different aircraft in combat situations or comparatively against other platforms on paper? For example, how does it stack up against the latest versions of the F-15? How would it fair against China's new stealth fighter? Or how would the JSF do against Russia's latest 4th generation +++ plane, the Su-35?

To answer some of these questions, we asked Dave Majumdar, TNI's Defense Editor, to look at each scenario on a case by case and see how such situations would pan out. Below are three articles, combined into one post for your reading pleasure, written several months back. Let the debate begin.

Recently revealed details concerning China’s Shenyang J-31 fighter suggest that the aircraft not only looks like the Pentagon’s Lockheed Martin F-35 Joint Strike Fighter (JSF), but it also offers comparable aerodynamic performance. But the real question is how far along Beijing has come in the development of subsystems like radars and engines. Moreover, there is the question of how well Chinese industry can integrate all of those disparate technologies into an operational aircraft.

On the surface, the J-31 looks very much like a twin-engine F-35 clone—and there are plenty of reasons to believe that the Chinese jet was based on stolen JSF technology—and could eventually be more or less a match for the American jet. “I think they’ll eventually be on par with our fifth-gen jets—as they should be, because industrial espionage is alive and well,” a senior U.S. military aviator told me last year.

But the Chinese don’t have to match the F-35 one-for-one. The Chinese just have to do enough damage to the U.S. military to make it too expensive to fight. Hypothetically, the air superiority oriented F-22 might be able to generate a kill ratio of thirty-to-one today against the Chinese J-11 Flanker, but the U.S. Air Force has only 120 combat coded Raptors. The Raptor might only generate a three-to-one kill ratio against the J-31 or J-20, which means attrition will take a serious toll on U.S. forces.   “When the J-20 and J-31 come around, even a three to one kill ratio advantage becomes costly,” a senior U.S. Air Force official told me late last year.

Where the J-31 is likely to fall short is on avionics—the aircraft’s radar, infrared search and track, data-links and especially sensor fusion. It’s comparatively simple perfecting individual pieces of hardware, but fusing all of the data from a multitude of sensors and off-board platforms is extremely difficult. Even the F-22 didn’t fuse Link-16 data with the rest of its onboard sensors until its Increment 3.2A software upgrade. It’s one of the reasons Lockheed has fallen behind on developing the F-35—and why Air Force and Joint Program Office officials continuous state their concerns about the jet’s software.

Then there is the question of if Chinese industry is up to the task of manufacturing the J-31. Stealth aircraft are built to very tight tolerances—one ten-thousandth of an inch was the standard for the F-22 and the F-35 has tighter requirements still. The Chinese have never demonstrated the ability to build to those kinds of tolerances. Nor have they been able to produce a reliable jet engine to date—so it will some time before China catches up to U.S. fifth-generation machines.

Even if the J-31 doesn’t quite match the F-35 technologically, one area the Chinese are currently investing in is a new long-range missile called the PL-15. It appears to be very similar to the European Meteor beyond visual range missile. Like the Meteor, the Chinese weapon is a ramjet powered missile, which should give it very long range and much better terminal phase performance than the venerable AIM-120 AMRAAM. The AMRAAM’s rocket motor burns for a few seconds and it coasts the rest of the way to the target—like most air-to-air weapons. Further, the AMRAAM is highly vulnerable to digital radio frequency memory jamming and needs to be replaced.

Air Combat Command (ACC) seems to finally be taking the threat seriously—since Air Force officials have been privately complaining about the problem for a while. “The PL-15 and the range of that missile, we’ve got to be able to out-stick that missile,” ACC commander Gen. Carlisle told Flightglobal.

When the Boeing F-15A first flew in July 1972, the Eagle was the ultimate air superiority fighter. Fast, high-flying, agile and built around a massive APG-63 pulse-doppler radar, the Soviet Union had nothing that could match it. Overtime, McDonnell Douglas—the F-15’s original manufacturer before its merger with Boeing—adapted the airframe into a potent multirole fighter that eventually became the F-15E Strike Eagle. While both the air superiority oriented F-15C and the strike-oriented F-15E will remain in service with the U.S. Air Force for decades to come, by far the most advanced current version of the Eagle has been ordered by Saudi Arabia. But will that be enough compete with Lockheed Martin’s F-35 Joint Strike Fighter?

Saudi Arabia has ordered some 84 new-build F-15SAs and 70 upgrade kits to retrofit their existing Strike Eagles to the new standard. When the massive $29.5 billion contract was signed December 2011, it was the largest foreign military sale in the history of the United States. In the ensuing years, Boeing has developed and tested the upgraded jets, which are powered by General Electric F110 engines rather than Pratt & Whitney F100s. The company is finally starting to get ready to deliver the aircraft. The first of the new jets rolled out of the Boeing plant in Saint Louis, Mo., earlier this earlier in April.

Perhaps the single most significant upgrade found in the F-15SA package is a fly-by-wire flight control system—previous versions of the Eagle used a hybrid computer augmented stability system. The addition of the fly-by-wire system allowed Boeing to reactivate the F-15’s two dormant outboard wing hardpoints that had always been present, but never used. The problem previously had been stability differences induced by carrying weapons on stations one and nine.

The new digital system looks across an entire frequency band continuously rather than scanning through a frequency band—which means that even low probability of intercept (LPI) signals might be detected (radars on stealth fighters like the F-22 and F-35 use LPI techniques to try mask their emissions for electronic support measures suites). Further, its interferometric antennas can generate far more accurate bearing measurements than the current system.

The DEWS’ performance is probably comparable to the F-22’s or F-35’s electronic support measures suites since it is based on those systems. It’s head and shoulders better than anything currently fielded by the U.S. Air Force’s own Strike Eagles. U.S. Air Force jets won’t have anything comparable until the Eagle Passive/Active Warning and Survivability System (EPAWSS) is fielded.

The F-15SA is also equipped with Lockheed Martin’s AN/AAS-42 infrared search and track system. And all of that information from the radar, infrared search and track and the electronic warfare system are fused together—similar to the F-22 and F-35—into a coherent picture. That picture is displayed on large-format color displays that are similar to those found on the F-35—in both the front and rear cockpits. Both aviators are equipped with the Joint Helmet Mounted Cueing System. Taken together, the F-15SA is an extremely formidable multirole fighter—possibly the single best fourth generation fighter the United States has ever produced.

But is that enough to compete with the F-35 on the open market place? Longer-term, it looks like the F-35 will be the dominant player on with fighter market—at least in parts of the world aligned with the West. Stealth is a major selling point with the inevitable proliferation of advanced Russian and Chinese-built surface-to-air missile systems. Further, the F-35 has the backing of the United States government—which is a huge trump card for the program. In the short-term, Boeing may have opportunities to sell the F-15 to wealthy customers who need a very capable long-range jet and who can afford the Eagle’s hefty price tag. Those customers are likely to be in the Middle East or Asia—nations that are not likely to be cleared to receive the F-35 in the near term.

But one also has to remember that buying a fighter is less about aircraft performance or even military requirements than pure simple geopolitics. Buying a jet means you as a military are tying yourself into a strategic alliance with another country and its hardware. For many nations, making sure they are able to tie seamlessly into the Pentagon’s forces is of paramount importance. So even if you buy American, unless it’s a variant operated by the U.S. military, you might end up with an expensive boutique fleet with a lot of expensive maintenance bills.