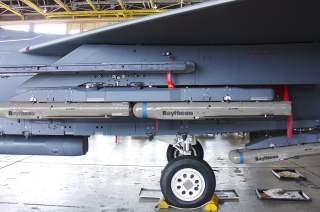 The new glide bomb, which incorporates a tri-modal seeker, will now have to complete government “confidence testing” before it enters into its operational test phase before being fielded onboard the Boeing F-15E Strike Eagle and the Boeing F/A-18E/F Super Hornet and Lockheed Martin F-35 Joint Strike Fighter. The weapon is crucial to enabling the F-35 to perform the close air support mission effectively.

“This powerful, integrated seeker seamlessly shares targeting information among all three modes, enabling the weapon to engage fixed or moving targets at any time of day and in all-weather conditions,” Raytheon brags on its website. “The SDB II bomb's tri-mode seeker can also peer through battlefield dust and debris, giving the warfighter a capability that's unaffected by conditions on the ground or in the air.”

The powerful new seeker will allow the SDB II glide bomb to attack mobile targets from as far away as 45 miles in any weather condition. The weapon’s range also helps to minimize the aircrews’ exposure to enemy defenses. Indeed, when paired with a stealth aircraft such as the F-35, the weapon could be used to strike high value targets well behind enemy lines where air defenses are especially heavy.

Thus far, the weapon has performed well in testing according to Raytheon. “During developmental testing, pilots dropped forty-four SDB II bombs and tested them in all modes of operation,” Raytheon said in a statement. “The weapon destroyed maneuvering targets in adverse weather and demonstrated third-party control through a datalink. It also chose the correct target from among decoys and proved compatibility with the F-15E Strike Eagle.”

With the weapon integrated on the F-15E, work has already started on integrating the SDB II onto the F-35 and the Super Hornet. After the weapon is integrated on those aircraft, it is likely that the new bomb will also be integrated onto other aircraft such as the F-16 or even the Lockheed Martin F-22 Raptor, which carries the original GPS/INS guided SDB weapon.

Raytheon has already started producing initial versions of the SBD II. “Raytheon has also begun work on the SDB II second production lot after completing delivery of Lot 1 in 2017,” the company said.