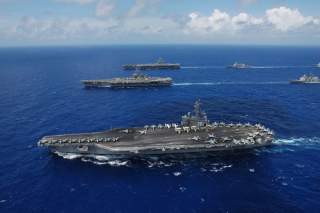 Despite the proliferation of precision-guided ballistic and cruise missiles, aircraft carriers are far from obsolete.

That was the message Vice Admiral Mike Shoemaker, commander of Naval Air Forces, sought to deliver this week.

Writing in a commentary piece on DOD Buzz, Shoemaker argued that: “Today, more than ever, U.S. national interests require the speed, endurance, flexibility and autonomous nature of the U.S. Navy’s nuclear powered aircraft carrier, which deploys, operates and is prepared to fight as part of a Carrier Strike Group (CSG).”

He added: “Operationally, the combined strength of the CSG remains vastly greater than the sum of its parts. As a complex, joint force multiplier, with command and control and organic logistical capabilities, there exists no comparable way to quickly generate the effects crucial to American diplomatic and economic interests that carrier aviation offers.”

Furthermore, Shoemaker stated, carrier strike groups are more than able to defend themselves even in contested environments. “Even when faced with contested waters and airspace, the composition and maneuverability of a CSG ensures survivability of the carrier while its embarked carrier air wing uses its integrated capabilities to project power, thus enabling the U.S. to continue its role as a key guarantor of peace and stability around the world.”

Still he admitted that “After nearly 14 years of sustained combat operations, Naval Aviation forces must reset and recapitalize in an effort to ensure readiness in the future.”

In both the DoD Buzz op-ed, as well as at an event this week at the Center for Strategic and International Studies (CSIS) in Washington, DC, Shoemaker outlined how the U.S. Navy intends to transform its CSGs in the coming decades to keep them relevant.

This begins with the Gerald R. Ford-class aircraft carriers, the successor class to America’s Nimitz-class carriers. “A truly innovative ship, the Gerald R. Ford-class CVN will be the nucleus for our future carrier strike groups and a critical enabler of U.S. naval power for the 21st century. A major redesign of the Nimitz-class, Ford incorporates visionary advances in technology resulting in significantly improved combat capability and enhanced service life,” Shoemaker wrote on DOD Buzz.

Aircraft carriers are only as effective as their air wings, the future of which Shoemaker discussed in both his DOD Buzz op-ed and at the CSIS event. Regarding firepower, Shoemaker mentioned both the F-35C and the UCLASS program, which is aimed at designing a long-range carrier-based stealth drone.

“Unmanned Carrier-Launched Airborne Surveillance and Strike will be the next step in the Navy’s revolutionary integration of unmanned air systems into the CSG and will provide the strike group commander with persistent ISR plus time critical targeting and precision strike capability,” Shoemaker wrote. “The real advantage this system brings to the fleet is its ability to operate in anti-access/area-denial (A2AD) environments and provide increased situational awareness of potential threats ahead of the CSG, essentially serving as the commander’s initial “eyes and ears” in contested air and water space.”

He also discussed the F-35C, which should reach initial operational capability in 2018. Although the F-35C will enhance CSGs’ stealth abilities, and be able to carry greater amounts of ordnance that current air wing aircraft, its greatest contribution to the CSG will be as a force multiplier.

“The most important thing that the F-35C brings is the ability to fuse information, collect the signals and things that are out in the environment and fuse it all together and deliver that picture to the rest of the carrier strike group,” Shoemaker said at the CSIS event, according to a report in DOD Buzz. This will enhance the lethality of the F/A-18 Super Hornets that will form the backbone of the future carrier air wings.

America’s CSGs will also boast greater anti-submarine warfare capabilities thanks to the upgraded MH-60R helicopter. “The R (MH-60R) comes with a very capable anti-submarine warfare package. It has an airborne low-frequency sensor, an advanced periscope detection system combined with a data link, and forward-looking infrared radar. With its capable electronic warfare suite, it is the inner defense zone against the submarine for the carrier strike group,” Shoemaker told the audience at CSIS this week.

America’s future CSGs will also be able to wage electronic warfare more effectively, according to Shoemaker. He noted that the U.S. Navy was currently finalizing the transition from the  EA-6B Prowler electronic warfare aircraft to the EA-18G Growler aircraft. “EA-18G Growlers will dominate the electromagnetic spectrum, providing advanced airborne electronic attack capabilities, screening CVW and CSG assets conducting their missions, and protecting joint forces operating ashore by disrupting enemy communications.” he wrote in the op-ed.

Shoemaker also noted that CSGs’ ISR capabilities will be improved by the retiring of the E-2C Hawkeye airborne early warning aircraft in favor of the upgraded E-2D variant.

“E-2D Hawkeyes have new radars that significantly improve their ability to search for and track targets while providing critical CSG command and control, and coordination of a range of missions, including integrated air and missile defense, and long range anti-air and anti-surface warfare,” Shoemaker wrote.

Watch Shoemaker discuss the future of the carrier air wing below: