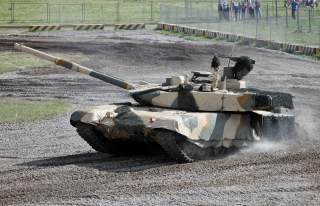 Russia and China are drawing closer together as Washington ratchets up pressure on Moscow and Beijing.

In recent months, the United States has enacted sanctions against Moscow and has imposed a series of trade tariffs on Beijing, antagonizing both great powers simultaneously. As result of American pressure, the two powers—which already had grievances against Washington—have formed a strategic partnership to balance against the U.S-led liberal hegemony.

"I am visiting Russia as a new defense minister of China to show the world a high level of development of our bilateral relations and firm determination of our Armed Forces to strengthen strategic cooperation," People’s Liberation Army Gen. Wei Fenghe, China’s minister of national defense, said at the Moscow International Security Conference according to the Russian TASS new agency.

Wei explicitly told the conference attendees that he was there to demonstrate to Washington that China is there to support Russia in their common struggle against an American dominated liberal international world order.

"Second, to support the Russian side in organizing the Moscow International Security Conference the Chinese side has come to show Americans the close ties between the Armed Forces of China and Russia, especially in this situation. We’ve come to support you,” Wei said. “The Chinese side is ready to express with the Russian side our common concerns and common position on important international problems at international venues as well."

The Russian side also praised the new level of cooperation reached between Beijing and Moscow.

“The efforts of the leadership of the both countries, Russian-Chinese relations today has reached principally new unprecedented level, and have become a critical factor in keeping peace and international security” Russian defense minister Gen. Sergei Shoigu said.

As Carnegie Moscow scholar Dmitri Trenin wrote in his book Should We Fear Russia?, Russia and China are wary of each other, but abhor American dominance of the international order.

“Each country is wary of coming too close to the other. China and Russia, however, can continue to consolidate and upgrade their relationship short of an alliance,” Trenin wrote. “In this case, more of Russia’s natural and military-technological resources would be made available to China. Strategic coordination between Moscow and Beijing would remain loose, but, in the larger scheme of things concerning the world order, Beijing and Moscow will be on the same side.”

The goal of the Russian-Chinese entente would be to limit American dominance across the globe.

“The Greater Eurasia that they are constructing will not be run from a single center, but their continental entente will essentially be aimed at limiting US dominance on the edges of the continent and in the world at large,” Trenin wrote.

Thus far, Washington’s own actions have fueled closer cooperation between the two Eurasian titans. As Russia grows more isolated from the West, the Sino-Russian alliance will only grow closer.