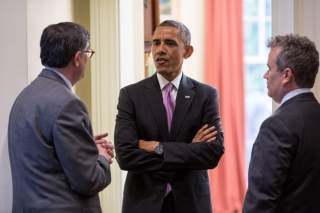 I disagree with the president’s use of executive power to protect illegal immigrants who have openly defied our laws for years. But he’s right to say that our immigration policy is “broken” and we have “de facto amnesty.” Neither party wants to deport them. Illegal immigrants eventually become Democratic voters. If they do not attain citizenship, their children get it automatically by birth and will likely vote Democratic when they are eighteen and throughout their lives. What’s more, a number of Republicans, ignoring these long-term political effects, like immigration because it depresses wages, thereby helping businesses.

Republicans have given us de facto amnesty by executive inertia for decades. President Reagan signed the first amnesty law (the Immigration Reform and Control Act) in 1986. The other part of that law was supposed to crack down on employers who knowingly hired illegal workers. This was never enforced. The law is a farce. When Republicans controlled the White House, they did nothing to beef up enforcement. The only difference between that and what President Obama has done is a formal announcement. And if I had to choose between an announced amnesty and a stealth one, I’d rather have it announced. At least the public knows who to blame when they suffer the unintended consequences—lower wages for high-school graduates, more people on entitlement programs and so on.

Every Republican member of Congress knows we don’t enforce the Immigration Reform and Control Act (IRCA). They also know that millions of illegals work every day in agriculture, food processing, construction and other low-wage jobs. They could have held hearings, subpoenaed the owners of the major ag and poultry processors to testify, humiliated them on national television, enlarged the budget for workplace enforcement of IRCA and all the other tools that make for high Washington drama. When Congress gets its blood up, things change.

But the opposite occurred. When the Department of Homeland Security (DHS) raided a major Georgia onion farm and arrested hundreds of illegal workers, Sen. Saxby Chambliss (R-GA), a conservative who says he is against illegal immigration, demanded the DHS stop raids in his state. They stopped. The same thing happened in Nebraska when meat processors were raided, and in Texas when chicken processors were briefly put on the spot. Republicans came to the rescue of business.

Is President Obama’s executive “action”—more aptly, inaction—any worse? I think not. He is essentially doing two things: exercising discretion in who gets deported and issuing work permits to millions of illegal immigrants. He has the authority to do the first. Congress has not appropriated enough money to deport all the illegals in the country. So someone has to prioritize who gets removed. That someone is the federal agency in charge—the DHS.

So the president can effectively promise the illegals in the country who have not committed a subsequent crime that they won’t be deported. They can’t all be deported, unless the Republicans in control of Congress seriously want to purge the nation of illegals, and as I’ve said, they plainly don’t want that. President Obama was correct to point out in his speech that Ronald Reagan and George H.W. Bush had issued executive orders to protect groups of illegals from deportation. Republicans at the time did not oppose it. He made his actions sound like they were being reasonable and humane, rather than usurping of congressional prerogatives.

Speaker Boehner’s speech deplored Obama’s executive actions. But listen closely and you will not hear a single Republican advocate deporting the millions of illegals the president will protect. They apparently agree with the president that deporting long-term illegal is is “not who we are.” They are merely angry that the president is acting “unilaterally,” just as they have done for decades when they held the presidency.

Republicans also say they will deny funding for the executive action. I fail to see how deferring deportations costs anything. Rather, it saves money. And as for the issuance of work permits, I read in the New York Times that Immigration and Customs Enforcement, the part of the DHS that issues them, is self-funding—that is, it generates money from fees it charges for documents, rather than by appropriations. If so, then the talk of a cutoff is simply bluster. The president ended his speech by saying immigrants are a “net plus.” Many economists disagree, pointing out that the effects of the last two decade’s historic levels of immigration are lower wages for American workers with high-school educations. And almost all of the new jobs created by immigrants went to the immigrants themselves. So it’s a net minus. The only political figure to make this point is Sen. Sessions (R-AL). I hope that those Republicans who say they deplore the president’s actions will soon outline an alternative immigration point of view.