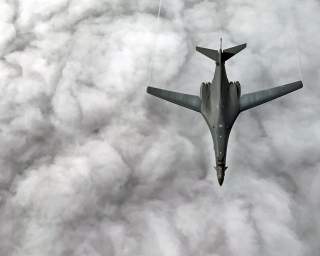 Image: One of two U.S. Air Force B-1B Lancer bomber is seen from a refueling aircraft during a mission to fly in the vicinity of Kyushu, Japan, the East China Sea, and the Korean peninsula June 20, 2017. U.S. Air Force/Airman 1st Class Gerald R. Willis/Handout via REUTERS.