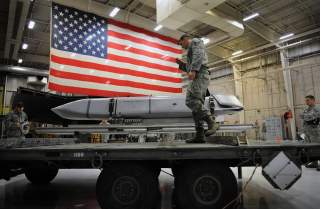 Early in the morning of April 14, 2018, two sinister black jets took off from Al Udeid Air Base in Qatar. The huge B-1B Lancer bombers, nicknamed “Bones,” were distinguished by the sinuous profile of their fuselage, designed in the 1970s to reduce observability on radar. However, the B-1’s stealth characteristics rapidly proved obsolescent due to advancements in radar technology. Indeed, a lone Marine Corps EA-6B Prowler jet joined the two-ship element of the Thirty-Fourth Bomber Squadron, likely to provide radar-jamming support.

The four-engine jets streaked towards the Syrian capital of Damascus, over a thousand miles northwest, dispatched by Washington to punish the Syrian government for an apparent chemical-weapon attack on a rebel-held community on April 4. However, Syrian airspace is protected by an extensive integrated air defense network of radars and surface-to-air missile batteries. Just two months earlier, on February 10, a Syrian S-200 (SA-6) missile shot down an Israeli F-16 fighter. Furthermore, the Russian military had deployed more sophisticated and longer-range Russian S-400 and S-300V4 surface-to-air missiles that could potentially intervene.

Even with their modestly reduced radar cross-section and jamming support, the Bones were at risk of being detected if they got too close, so the bombers’ four-person crews instead used a different ploy. Likely around two hundred miles away from their target, the B-1s released nineteen AGM-158A Joint Air-to-Surface Standoff Missiles (JASSM) from their bomb bays. (Earlier claims that these were the AGM-185B Extended-Range variant are reportedly incorrect.)

As the weapons plummeted to the earth, their eight-foot-wide wings flipped out and turbojet engines sputtered to life. The four-meter-long missiles leveled off a few dozen meters above the ground and streaked towards their target at roughly the speed of a typical jetliner, following a flight path programmed to loop around elevated terrain and enemy radars, while using a jam-resistant GPS and an inertial navigation system to avoid straying off course. As they made their final approach on the target, an integrated infrared seeker matched the building’s profile to its onboard 3D model and adjusted the missiles’ trajectory—giving them the accuracy to land within a three-meter radius more than half the time.

In the space of two minutes, starting at 4:00 a.m., all nineteen 2,250-pound missiles struck the Barzeh Research and Development Center, just outside the heavily defended airspace of Damascus, their thousand-pound WDU-42 penetrator/fragmentation warheads piercing through roofs of the target buildings before detonating. An additional fifty-seven Tomahawk cruise missiles launched by surface warships and the Virginia-class submarine John Warner contributed to the onslaught.

Syrian air defenses finally opened fire after most of the cruise missiles had hit, reportedly blindly shooting about forty surface-to-air-missiles into the night sky at nothing in particular.

Western intelligence agencies had identified the center as one used by the Syrian Scientific Studies and Research Center for the development and production of chemical weapons. The Syrian government claims otherwise, citing a November 2017 inspection by the OPCW that did not note the presence of chemical weapons.

The three buildings that made up the center were obliterated, as you can see in these photos and video. Indeed, the dozens of missiles were likely overkill, intended to inflate the size of the strike compared to the 2017 attack to signal escalating resolve. No lives were reported lost, however, as the building had been evacuated in anticipation of a possible attack.

Even if the firepower employed was excessive, the strike remains notable for being the first combat employment of the JASSM, a system intended play a key role in U.S. military strategy in coming decades.

China and Russia have both begun deploying long-range missiles that can threaten access to huge swathes of air space or large spans of international waters. Such antiaccess/area-denial weapons include the Chinese DF-21D antiship ballistic missile—a ground-based weapon that can threaten aircraft carriers at a greater distance than the combat radius of the carrier’s onboard attack jets—and the S-400 surface-to-air missile system, which can shoot long-range 40N6 missiles at targets up to 250 miles away. The Russian S-400 battery deployed in Latakia, Syria can theoretically threaten the airspace directly above the British airbase in Akrotiri, Cyprus and the U.S. base in Incirlik, Turkey.

While stealth aircraft can potentially infiltrate an air-defense system and attempt to take out such weapons, they are still at risk of eventual detection by low-bandwidth radars, infrared sensors, and even high-bandwidth engagement radars at short distances. Therefore, it is desirable finding a means to strike at such antiaccess systems from standoff range—beyond the adversary’s ability to retaliate.

Since the 1990s, the United States has made extensive use of Tomahawk cruise missiles, which can strike targets up to hundreds of miles away—but the Tomahawk is more observable on radar and can be shot down. Though Syrian air defenses do not appear to have had much success shooting down Tomahawks in both U.S. strikes in 2017 and 2018—grandiose claims of shooting down seventy-six missiles to the contrary!—a more capable adversary might do better.

Back in the 1990s, the Air Force decided it wanted a standoff stealth cruise missile with a reduced radar cross-section. Lockheed Martin’s AGM-158 prototype was selected in a 1998 competition, but the program experienced numerous failures in the subsequent decade. Finally, in 2009 a revised design succeeded in fifteen out of sixteen tests, and the weapon finally began production. Over three thousand of more than 4,900 JASSMs on order have been produced for the U.S. Air Force (the Navy dropped out of its share), and the latest version of the missile is being certified for a variety of platforms.

The basic AGM-158A model deployed in Syria uses a J402 turbojet engine and has a range of 230 miles. However, the AGM-158B JASSM-Extended Range model, though identical in dimensions and 70 percent of the components, more than doubles its reach to 620 miles thanks to a more fuel-efficient F107 turbofan engine and additional fuel storage. The upgrade increases the price from $800,000 to over $1.3 million, however. Lockheed Martin is also developing a six-meter-long XR-model with a thousand-mile range and modified wings, as well as a smaller -SR model that can fit in the weapon bays of a stealth fighter. Range might also be cheaply extended by simply reducing the weight of the warhead.

A maximum of twenty-four JASSMs can be mounted in internal rotary launchers on a single B-1B, sixteen inside a B-2 stealth bomber, and twelve or twenty on a B-52H. Smaller F-15E, F-16 and FA-18 fighter jets can carry one or two, and it is expected that the F-35 Lightning II will be certified to carry them externally (though it won’t be especially stealthy when doing so). The missile is also in service with Finland and Australia (mounted on FA-18 Hornets), and Poland (carried by F-16s). The Navy is also deploying a modified AGM-158C antiship version known as the LR-ASM, which may finally replace the aging Harpoon missile on surface warships and Super Hornet fighters.

The JASSM allows the U.S. military to deliver highly precise surprise attacks against targets already well protected by enemy air defenses. Indeed, enemy air-defense radars and missile batteries would likely be one of their chief targets in the opening phases of conflict, paving the way for additional attacks by more vulnerable fourth-generation jets using cheaper, shorter-range weapons. AGM-158s also might be used for strikes on well-defended high-value targets, such as headquarters, missile silos, power and communications centers, and fuel and weapons depots.

The Air Force is also looking to exploit the JASSM-ER’s stealthy, long-endurance characteristics for other roles. For example, another approach to disabling air defenses is to use bursts of microwaves to fry their electronics—a concept implemented in a prototype system called the CHAMP, which can reportedly take one hundred “shots.” However, CHAMP needs a stealthy, high-endurance platform to get close enough and loiter long enough to do its thing. In 2015, the Air Force announced it was looking to miniaturize CHAMP for mounting on the JASSM-ER missile.

As formidable long-range antiaircraft and antiship missiles capable of threatening entire regions proliferate across the globe, the JASSM would serve as an opening gambit to help U.S. aircraft defang those threats from a safe distance.